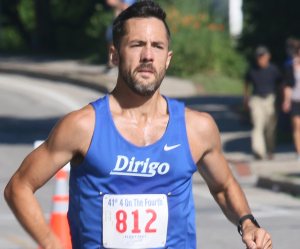 (Bridgton ME) Three days after a tornado roared into sections of Bridgton, over two thousand runners raced through an area of the town hit hardest by the storm.  Talk about resilience!

Beautiful weather for the 41st edition of the Bridgton 4 on the Fourth on Tuesday morning.

First-timer Rob Gomez of Windham (ME) ran away from the field that included 3-time champion Moninda Marube.

Moninda was only four second off his winning time in 2016 but, against one of state of Maine’s best runners, he was defeated by a significant twenty-five seconds (20:18).

Another first-timer, Heather Mahoney of Westford (MA), was the first woman to finish (24:14).  Heather was 24th overall.  Her husband, Chris, crossed 8th overall. 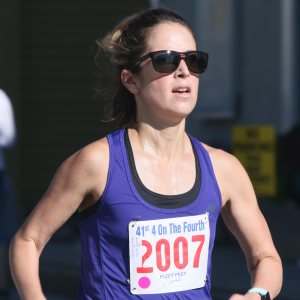 Two seniors from Principia College (Elsah IL), who work at Camp Owatonna in Harrison (ME), were among the top finishers.  Shane Witters Hicks was 3rd while teammate Nate Richards was 6th.

In fourth place was Colby grad Silas Eastman.  Silas has won this race in the past.

Osman Doolow (Lewiston ME) was another successful newcomer to this event.  Osman had a remarkable high school running season in 2015-2016 winning several Maine state titles.

Robert Hollis (Farmington ME) was back at 7th again.

Looking for a most-improved runner?  Without much research, I’ll take Anna Lastra.  Anna was a good runner for Fryeburg Academy but has now moved on to run at Stonehill College (Easton MA).  Last year’s time: 25:46 and 46th overall.  This year’s time: 24:37 and 26th overall.  Watch out for Anna if she runs the Bridgton race next year.

Mary Pardi of Falmouth, who has competed in Bridgton many times, ended up as the 3rd woman to finish.

The excitement, to me, in the Bridgton 4 on the Fourth is that you never know what runners will appear.  The way that Moninda Marube had easily won the three races he had run at Bridgton had me thinking that the battle would be for second.  Silly me!  If I had known who Rob Gomez was I would have certainly hedged my assumption.

Rob is a graduate of Medomak Valley and Bates.  He was the 5th Mainer to finish the Beach to Beacon 10K last year.  He was Maine’s “Runner of the Year” in 2013 according to New England Runner Magazine.  He has had two top-forty finishes in the Boston Marathon.  He owns the Eastern Shore Training company.  He’s into running!

The Bridgton race is serious for some but for many it is a social event.  It is not uncommon for runners to move into the crowd for a high-five or a hug.

A good collection of patriotic gear was in evidence. 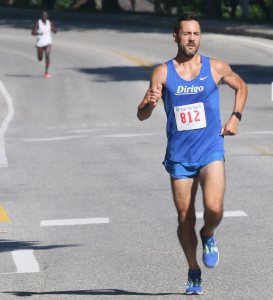 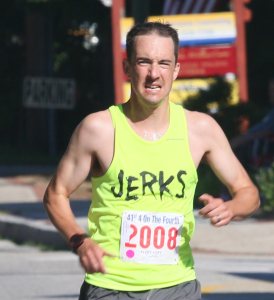 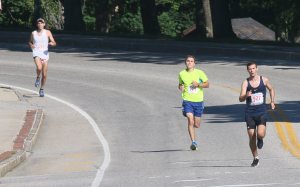 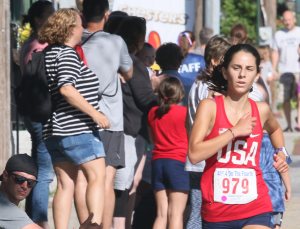 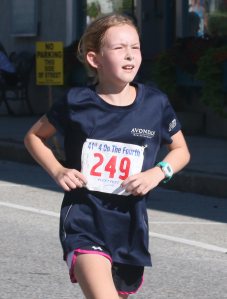 Nearby camps sent runners to Bridgton 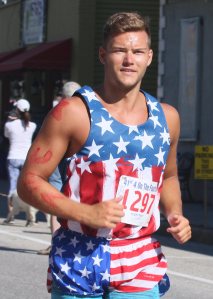 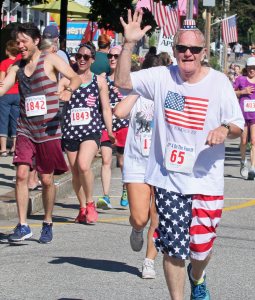 Bill Wood of Harrison ME 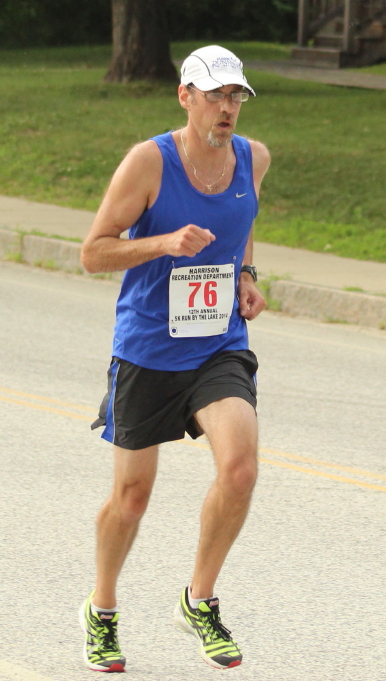 Jen Rohde was 10th overall and first among the women finishers 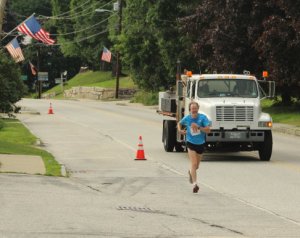 (Harrison ME) David Krall and Jen Rohde took top honors in the 12th running of the Harrison 5K Run by the Lake on Wednesday night.

David (from South Weymouth MA) covered the scenic course in 18:11 and had a commanding forty-second advantage over Arno Bommer (Houston TX) who finished second.

Jen (from Cumberland ME) ended up tenth overall (20:45) but her margin of victory was only eleven seconds over Ann Lastra of Fryeburg Academy.

The weather was pleasant for running (overcast) compared to the last two years when the participants faced pouring rain in 2013 and sun in 2012.

The first close race, from the Harrison Marina to the finish line in front of the Harrison Grange, was over fifth place.  Sixteen-year-old David Landry came into view ahead of Glenn Gordon and Mark Hogan and was able to hold that spot.

Josh Weisbach looked as if he would take 8th but 14-year-old Dorn Scalfani caught him at the bridge before the Grange.

Benjamin Sykes in the stretch run

David Krall’s 18:11 would have earned him fourth place last year.  Maybe David’s time would have been a lot better if there had been competitors in his vicinity.

I marvel at the turnover in the Harrison 5K.  The familiar faces are mostly in the crowd.

Arno Bommer improved his time from 2013 and moved up four slots from his 6th place finish that year.  Arno looked as if he was trying to outrun a Coastal Road Repair truck over the final yards.

Michael Mageles also improved his closing spot.  Last year he was 9th, this time around 6th.

This race appeared to be well organized thanks to race director Kelly Meuse.  My only worry on her behalf was before the race when a very dark cloud was moving over Long Lake with a thunderstorm in the forecast.  Thankfully, none of that possible decision-making bad weather kicked in. 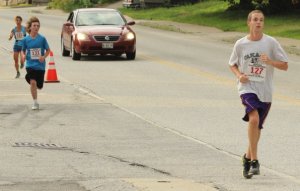 Filed under Harrison, Harrison 5K Run by the Lake