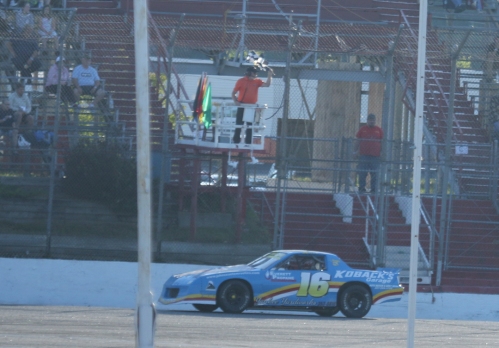 (Oxford ME) You don’t have to look very hard to find the weekly winner in the Ladies Division at Oxford Plains Speedway.

It’s going to be either Betty Nelson or Chloe Kiley.

At least that’s the way it has been through nine features this season.

Since then?  It’s been all Chloe.

Tonight, was Chloe’s fourth straight victory in August at OPS.

“It’s been nice,” said Chloe about the consecutive wins.  “The car wasn’t so good today in practice but felt great in the race.  The rain really loosened the rubber up.”

Betty started on the pole in both the heat and the feature.  Chloe was in the second row in both races.

Betty lost the inside lane in both races and Chloe took advantage and went on to win.

“It was all about learning for me tonight,” explained Betty afterwards.  “We didn’t race last week, and we have a new motor.  This car has more power, so cornering was an adjustment. I need to get better getting into corners and off corners.”

In the feature, Betty held the lead into the sixth lap with Chloe close behind looking for an opening. On a corner in Lap Six the opening presented itself.

“I think she (Betty) got a little loose and went up and I had enough to fill the hole and took it from there,” said Chloe about getting the lead for good.

“She (Chloe) got by me because of my error,” recalled Betty.  “I went up a little bit on the corner and it was all her lane.  She took it.  She’s a good driver.”

Chloe was able to expand her lead over the final fourteen laps.

In the closing laps, Addie McDaniels was able to get by Kasie Kolbe to reach third.  At the end, Addie was pressuring Betty for second place.

I asked Chloe about winning four straight times: “I have a great car.  I’d like to thank my dad, Johnny, and Michael Haynes for lending me this motor and everyone who helps out back.”

It will be interesting to see how Chloe and Betty match up in the races ahead as Betty gets more familiar with the new car.  “We’re hoping over the next few weeks to get it all dialed in,” added Betty.

Chloe has annually made steady progress in the points section of the Ladies Division and is the current leader.  She was 4th in 2017.  Tied for 3rd in 2018 and 2nd in 2019.  “I don’t really know how I’m different from 2017 which was my first year of driving,” said Chloe.  “I have had a lot more seat time since then.  Larry Emerson has been very helpful in teaching me how to drive this track.”

A little bit of rain before the races but dry once it started.

The Bandits weren’t scheduled for tonight so that gave me a chance to cover the Ladies Division.  Bandits are scheduled to race on Friday with the 250 two days later.

Start of the feature 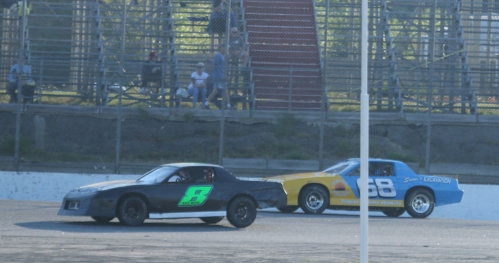 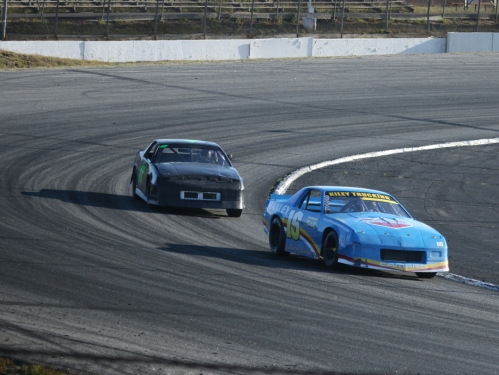 Chloe Kiley takes the lead from Betty Nelson in the feature

Betty Nelson led some early laps in the feature