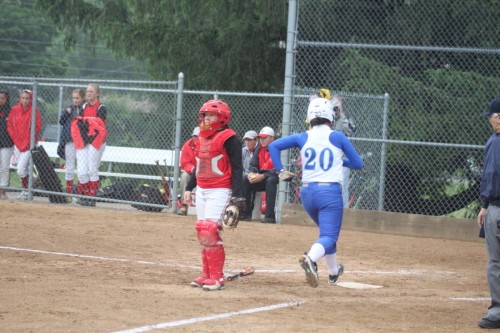 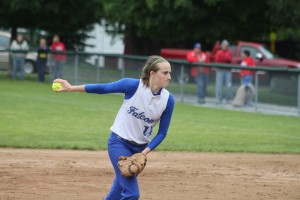 Kendall Meehan pitched a 5-hit shutout and drove in a run with a walk.

(Danvers)  It was one of the better two-strike at bats you’ll ever see in a high school softball game.  With the bases loaded, Danvers’ Kendall Meehan spoiled at least five two-strike pitches before earning a run-producing walk in the Falcons second inning.

That run and another one in the same inning were enough for #4 seed Danvers (19-3) as they defeated #5 seed Amesbury, 2-0, in the Division 2 North softball quarterfinals on a misty Sunday afternoon at Great Oak School in Danvers.

The Falcons next opponent will be either #1 seed Dracut or #8 seed Arlington.  Those two teams are scheduled to play on Tuesday night.

This game was quickly played (75 minutes) and there was little to choose between Amesbury starter junior Carolina Merrill (four hits and three strikeouts) and Danvers’ starter sophomore Kendall Meehan (five hits and two strikeouts) except for the game-deciding second inning.

In the decisive second, freshman Caitlin McBride doubled to left center and reached third on Devyn Downs’ sacrifice fly with one out.  Julia Saggese’s single to left drove in Caitlin with the first Falcon run.

Amesbury has trouble with a bunt in the second.

The second Danvers run of the inning was tainted.  Devin Johnson had walked before Julia’s single so there were runners on first and second with one out.  Erica Fleming’s bunt attempt was mishandled by Indian third baseman Autumn Kligerman loading the bases with two out.  Kendall Meehan then delivered Devin with the second run on the crucial walk I described above.  Carolina Merrill retired the next batter to end the inning but the unearned second run was on the books.

The Indians (16-6) had several promising innings but the combination of flawless Falcon defense and Kendall Meehan’s pitching preserved the shutout.

Amesbury didn’t do itself any favors by having leadoff batters doubled off first in the first (Amanda Schell) and the second (Erin Leary).

The Indians threatened in the fourth.  Amanda Schell doubled to right-center leading off but only got as far as third.

In the fifth, Amesbury put two hits together (Alexis Boswell and Rachel Cyr) with two outs but Kendall K’d her mound opponent Carolina Merrill to close out the inning.

Amesbury’s Jenna Barley singled in the seventh and reached second on a sacrifice fly with two outs but a routine grounder to shortstop Brittany Dougal ended the game.

Danvers only opportunity to score other than the second inning was in the fifth when both Brittany Dougal (double) and Chrissy Gikas (Amanda Schell error) reached with one out. But Carolina Merrill pitched her way out of that one with a popup and a ground out.

Shortstop Brittany Dougal prepares to record the final out of the game.

Amesbury has no seniors on the 2012 team.  Juniors Cassie Schultz and Erin Leary made the All-League team in the Cape League this season.  Teammates Amanda Schell (sophomore) and Carolina Merrill (junior) were named CAL All-Stars.

Danvers coach Tara Petrocelli (second year) was the Coach of the Year in the NEC South.

I was told that the Great Oak School field was waterlogged Saturday but town workers made it playable today.  It was in terrific shape.