Last shot of the game 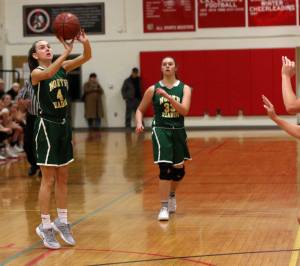 (Amesbury MA) Amesbury rallied from thirteen down in the final quarter and had a shot to tie it at the buzzer.

But the shot missed, and North Reading escaped with a 43-41 win in Cape Ann League action on Tuesday night.

The ups and downs in this game were significant.

If you came early, the Indians were unstoppable and off to an 8-0 lead in the first 1 ½ minutes.

If you saw just the middle section it was all Hornets.  They drained three’s (8 of them) and took very good care of the ball.

If you looked in after NR sported a nice cushion (42-29) at the 6:41 mark of the final quarter, you saw Amesbury put pressure defense and thirteen straight points together and nearly catch the Hornets.

This certainly was a game where the good things and the things needing work were obvious for both squads.

The visitors ran an excellent offense against single coverage.  They passed, they drove, they got to the basket, and drew fouls.  When the taller Amesbury defenders started to double-team in the final quarter, NR struggled and turned the ball over six times in four minutes and set up the Indians late-game run.

The Indians (1-1) got off to the electric start because scoring threat Flannery O’Connor was able to get the ball in close against light coverage.  That quickly changed and most of the rest of the game Flannery had at least two defenders and sometimes a third one nearby.

“Once we start hitting our shots, we’ll be tough to beat,” added Coach Dollas.  With Flannery so closely covered there were shots for teammates that didn’t fall this time.

North Reading (2-0) was good from long range.  The Hornets struck eight times from far out with Ali Grasso and Casey McAuliffe getting three each.

Amesbury had twelve from Flannery and eleven from newcomer Avery Hallinan.

After the home team grabbed the quick 8-0 lead, North Reading followed with a 15-1 stretch that had them ahead, 15-9, early in the second period.

Later the Hornets put eight straight together in the third quarter when Lauren Sullivan’s full-court layup was followed by three’s from Ali Grasso and Lauren.

But no sooner did that happen in the third quarter than Amesbury puts its own run of points together.  Mary Bullis hit a three from Alli Napoli and Flannery O’Connor drove the length of the court.  Mary Bullis finished the run by converting her own missed shot.

Typical of this game, however, NR came back with its own version of good offense and was sitting pretty (42-29) with 6:41 remaining.

It is hard to believe that the Hornets had only one point (Ali Grasso free throw) the rest of the way.

The Indians were within a point (42-41) but came up empty in the final minute.  Ali Napoli got a shot off to the right of the lane in heavy coverage that missed to end the game.

Free throw shooting was a struggle for both teams.

The free throw shooting was not good in this one.  North Reading missed ten (11-for-21) and Amesbury eight (12-for-20).  The Indians had six misses within their thirteen-point rally in the final quarter.

Alli Napoli took a heavy fall late in the game driving to the basket.  Somehow, she managed to play on. 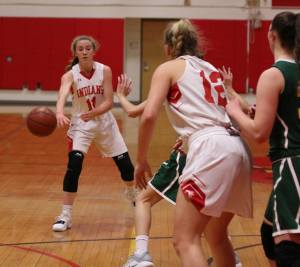 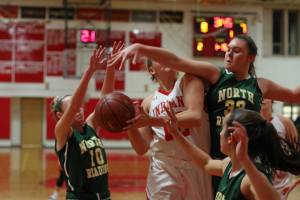 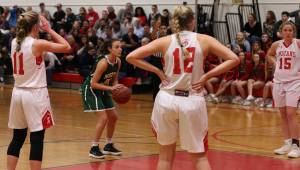 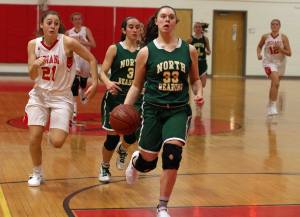 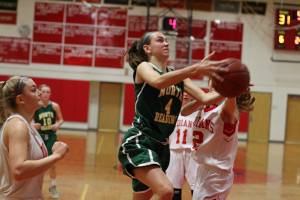 Lauren Sullivan (4) in for a layup

Strong second half gets Pentucket girls past North Reading 50-35 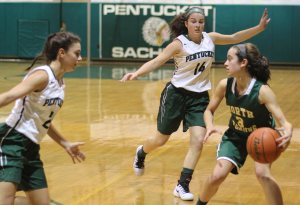 These teams shared the league title last year and split their games with each other during the season.

Graduation had put a serious dent into both teams and I was curious to see what they would be like this season.

The defenses on both sides were impressive.  There were very few direct routes to the basket.

One of the glaring stats in this game was the high number of turnovers.  By my count, each team committed twenty-five of them.  The traveling violations by both squads almost reached the epidemic level.  But that is what happens when defenses play well.

Taylor Moore (33) and Emily Riley (31) eye one of the many rebounds off of free throws.

The other glaring stat was the free throw shooting.  It was atrocious.  The Sachems (3-0) missed twenty-three times while the Hornets (2-1) missed ten.

Meanwhile, Pentucket struggled to make any kind of shot.

The second half was an entirely different story.  Pentucket put in two freshmen (Angelina Yacubacci and Casey Hunt) to start and off the Sachems went.  The home team made shots and that allowed their press to get set up.  NR did not react well and had eleven of their TO’s in the third quarter alone.

Angelina Yacubacci led the Sachems with nine points and all of them came in the terrific Pentucket third quarter.

Pentucket put a 15-1 run together to get ahead for good, 27-23 with an Alyssa Demeule layup assisted by Bella Doyle at 2:30 of the 3rd quarter being the final points.

By the end of the 3rd, the Sachems led, 34-27, and looked to be pulling away for good.  Suddenly, however, in two straight possessions in the final quarter, the Hornets (Casey McAuliffe, Lauren Sullivan) drained 3-pointers.  Now within a point (34-33) with 6 ½ minutes left, it was once again anyone’s game.

That Pentucket defense that had been good turned to very good over the final 6 ½ minutes.  NR was limited to two points by a defense that would not allow penetration.  There was plenty of side-to-side stuff going on but getting to the basket ended for North Reading.

In the same final minutes, Pentucket started with nine unanswered points. They had two layups (Liv Cross, Emily Riley) on assists by freshman Casey Hunt.  An NR turnover led to a layup (Emily Riley) and then senior Colleen Jameson added a dagger-three to drive the Pentucket lead to ten (43-33) and this game was history.

NR’s 6-5 Jess Lezon is now at Yale.  Jess had seventeen points and twenty rebounds in the Hornets win last February at Pentucket.

NR’s Kat Hassapis will be playing soccer at Bentley in the fall of 2017.

John McNamara’s coaching record at Pentucket is now at 217-35.  This year’s team is young but the defense is very good.  The offense?  They have size but taking advantage of it versus NR led to many turnovers.  I’m guessing that the foul shooting will become less “foul” as the season goes on.

The biggest surprise for me was the temperature in the gym.  What happened to the heat?  Anyone who has been there in the past knows how tropical it was.  Maybe a window was open?

North Reading was 20-3 last year and reached the D3 North finals.  Pentucket was 16-6 and lost in the first round to Triton. 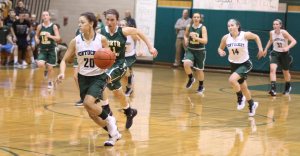 Second half starters for Pentucket 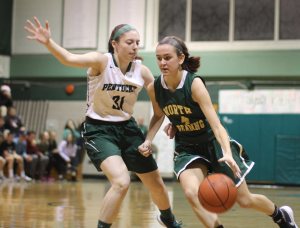 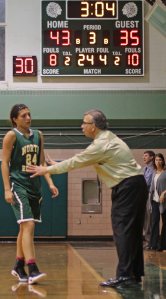 (Byfield MA) North Reading is not going to have any problem with sharing.

The Hornets haven’t had a CAL girls’ basketball title, shared or unshared, since 1993!

But the drought is over and NR now can get ready for the Division 3 tournament. The MIAA bracket will be released on Friday.

Triton (10-10) sealed their ride to the Division 2 tourney with a recent win over Everett.

The visitors took the lead for good (5-4) just three minutes into the game on a three by senior Julia McDonald.

Jess Lezon (6’5”) drew plenty of Vikings defenders wherever she was. The Yale commit dominated the second quarter with eleven points getting terrific feeds from teammates. North Reading led 28-15 at halftime.

Jess Lezon gets a layup over Abby Ostrander

Junior Tessa Lafrance had thirteen points and defended Jess Lezon. Her problem? Foul trouble. If there is such a thing as a foul magnet, Tessa was it. Triton coach Dan Boyle was forced to keep the 6’ junior on the bench for half of the second quarter and didn’t start her in the 3rd quarter. Tough place to have your top scorer and your best defensive matchup against Jess Lezon.

The Vikings were able to chop some points off the NR halftime advantage in the second half. After an Erin Savage three, Triton got as close as they would get, 36-29, with three minutes left.

A couple of things that caught my eye in this game were: Triton played some serious defense, and North Reading did not force the ball inside but passed into open shots on the perimeter.

The Vikings constantly applied pressure and were quick enough to be able to take chances and recover defensively. They jumped passing/dribbling lanes and forced thirteen turnovers by my count.

North Reading wasn’t shy about taking three’s, especially wide open ones. And there were quite a few available because Triton did everything they could to deny passes inside. One thing that worked several times for NR was quick breakouts. Several times when the break didn’t produce a good shot they were able to hit Jess Lezon rolling down the lane.

The Hornets have won five straight and sixteen of their last seventeen. They could be the top seed in the Division 3 North.

NR’s two losses were against Pentucket and Newburyport. Both of those teams are in Division 2.

Pentucket coach John McNamara was in the house.

Last time I saw the North Reading girls in action was at Manning Field in Lynn when they won the Division 3 North soccer title.

Two weeks ago North Reading defeated Triton, 51-36, at home. Jess had twenty in that game while Carly Swartz had seventeen. 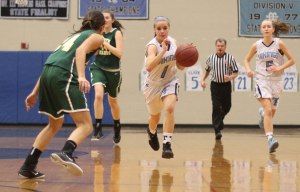 Morgan Snow on the move

The Hornets are now a man-to-man team. They have nine seniors on their roster.

Being courtside I catch things that are said on the court. I also get a glimpse of facial reactions. At one point Jess Lezon was covering Mel Primpas. The height discrepancy was very noticeable. Hannah Clark had the ball on the wing and Mel backed down on the block with Jess behind her. Hannah saw the mismatch and smiled.

Tessa Lafrance gets her 5th foul

Jess Lezon looks for a pass 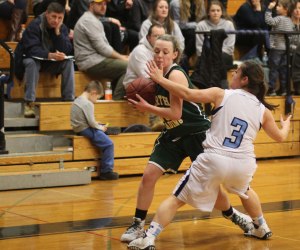