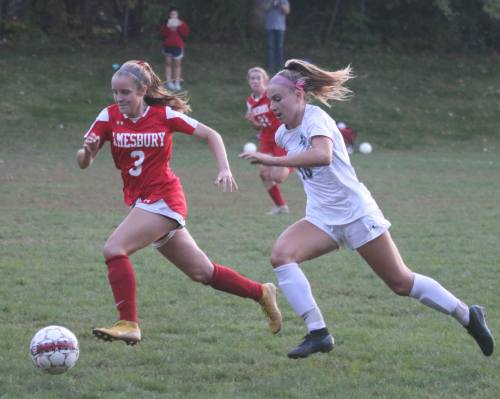 (Amesbury MA) It didn’t figure to go this way.

Why didn’t it figure to go this way?  (1) The last fourteen times the two teams have met, including this season, the Indians won twelve times.  (2) In the last seven games between the two teams ME had scored only twice.

And then to increase the chances of another bad outing, no team bus showed up in Manchester and the Hornets were forty-five minutes late getting to Cashman Field in Amesbury.

So the stats and the situation suggested strongly that Manchester-Essex would struggle…………but they didn’t. 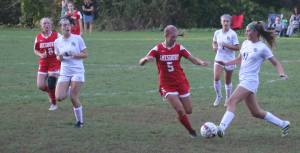 And that was where this game was won.  Early.

The visitors tallied a goal in the first forty seconds and by the end of eleven minutes had two more.  Amesbury never recovered.

That lack of reaction bothered Indians coach Adam Thibodeau.  “We gave up.  If the other team gets off to a better start, we give up.  All of our losses have been by big scores.” 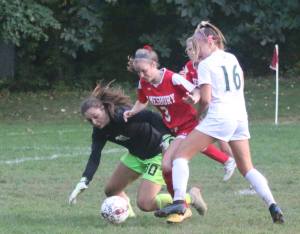 Dasa Hase (16) nearly scored in the second half.

The catalyst in the Hornets’ three goals was sophomore Dasa Hase.  She had the opening goal, assisted Jill Bowen on the second, and scored the third.

“We put her (Dasa) in the middle to try and use her speed,” said Coach Cosgrove.  “Sometimes out wide her speed gets hidden.”

Teammate Drew Charlton sent Dasa off in the first minute with a long pass up the middle. Dasa dribbled into space and cashed an open look against AHS goalie Julia Campbell.

Alli Napoli (out with injuries for a few games) was in net for Amesbury in the second half.

“Julia (Campbell) was beaten three times,” said Coach Thibodeau, “but it wasn’t a keeper issue.  All three were wide-open shots.”

Emma DiPietro hit the crossbar in the first half

Amesbury came close twice in the last ten minutes of the first half.  Emma DiPietro hit the crossbar and Alyssa Pettet fired a direct kick over the net.

The three-goal halftime lead changed ME’s approach to the second half.  “In the second half we said let’s not concede a goal,” explained Coach Cosgrove.  “We rested our star players and we got out of here with another clean sheet.”

The Hornets had three defenders stay on their half of the field even when their teammates were advancing on the AHS goal in the second half.

“In the last seven games, we’ve scored a goal each time within the first seven minutes,” said Coach Cosgrove.

The Indians did themselves no favors in Division 4 with the loss.  “We now may have to go to them in the tournament,” said Coach Thibodeau.

Coach Thibodeau: “They’re a great team.  I was hoping for a better battle in a playoff atmosphere but it didn’t happen.”

The Indians defeated ME 2-0 earlier in the season.  Chelsea Lynch (now out with turf toe) had both goals for AHS.

Amesbury eliminated Manchester-Essex last year in the first round of the D4 tournament.  They would go on to reach the state semi-finals before losing to Millis.

Dasa Hase (16) congratulated by Jade Cromwell on her second goal

Dasa Hase (16) congratulated by Jill Bowen after her first goal 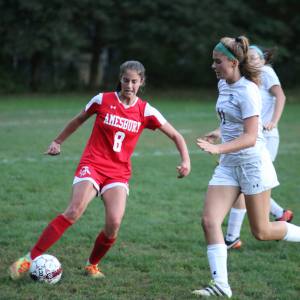 Emma DiPietro tries to get past Drew Charlton