Sean Whooley pitched a 2-hitter, had two hits, scored a run, and drove in a run.

(Amesbury) In years to come, when the talk around the water cooler turns to the Ipswich Tigers’ 2013 season, I strongly suspect that their games with Amesbury will get mentioned.

Why?  The Tigers defeated Amesbury twice and didn’t allow a run in either game.

Today, was the second win as Ipswich (4-10) put pitching, hitting, and defense together in a perfect package and shut out Amesbury, 4-0, on a cool Tuesday afternoon of Cape Ann League baseball. 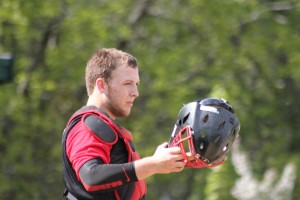 Sean struck out just one batter so the outs were made in other ways.  On this day, the Ipswich defense made numerous big plays highlighted by a run-saving stab by leftfielder Ryan Silva in the corner off Mac Short in the Amesbury sixth.

The Tigers collected ten hits off of Amesbury’s first-time starter Devlin Gobeil getting at least one in every inning.  Josh Guertin, Sean Whooley, and Austin Rubino each had two hits for the visitors.

Ipswich scored its first run in the second inning.  Austin Rubino doubled to left with one out and came home on Eric Gongas’ single to center.

Despite all the hits, Sean Whooley’s pitching, and the tight defense, the Tigers lead was only, 2-0, through six innings.  Let’s toss a cliché’ out here: it was still anyone’s ballgame!

But in the seventh Ipswich added two more runs.  Josh Guertin was hit by a pitch with two outs.  Josh then stole second and came home on Kyle Barber’s double over John Pesci’s head in rightfield.  Sean Whooley singled to left bringing Kyle Barber in with the fourth Tiger run.

That four-run lead held up through the Amesbury seventh.

Amesbury (7-8) hit the ball hard a couple of times with nothing to show for it.  Devlin Gobeil nearly reached the fence in straightaway center in the second but Ryan Law tracked it down.  Twice the Indians lined to third baseman Josh Guertin.  One of those line drives turned into a double play.

The heartbreaker for Amesbury, however, was Mac Short’s rope in the sixth.  Tommy Connors was on first with two outs when the Amesbury catcher lasered a ball toward the leftfield corner.  Ryan Silva had a great jump on it and stabbed it near the 344-foot sign to end the inning.  If that ball lands, Tommy Connors would have scored and Mac Short would have been on second.  The score would have been, 2-1, instead of 2-0 with the inning over.

In the first Ipswich/Amesbury game, the biggest play in the Tigers win was a seventh inning, game-ending catch in leftfield by Dan D’Agostino off the bat of, you guessed it, Mac Short.

Ipswich catcher Henry Sacco had his left arm in a sling.  He injured the shoulder sliding into second in the Hamilton-Wenham game on Monday.  Eric Gongas was the catcher for Ipswich in today’s game.

Alex Amoroso was tagged out at home in the fifth inning by Mac Short on a very close play.  Here are four pictures of the play: 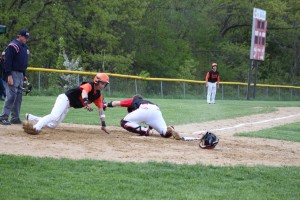 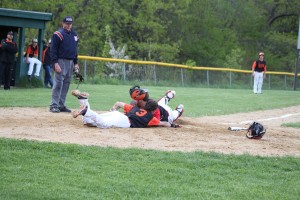 The Tigers have now won two straight after losing six straight and will face Rockport at Rockport on Thursday.

Amesbury will look to end a two-game losing streak at Manchester-Essex on Thursday.

Eric Gongas prepares to throw out John Pesci at first

Shortstop Mike Savoie fires to first for the final out 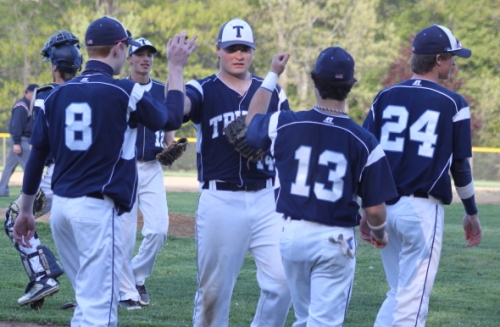 Triton pitcher Nick Cornoni gets congratulated after his complete-game win.

Triton (8-6) broke a 3-3 tie in the sixth inning thanks to four straight two-out walks by Indians starter Andy Reidy.

In the seventh inning, with Nick Hawruchiew now pitching, Tommy Connors (playing second in a drawn in infield) bobbled a grounder enabling the Vikings to get an insurance run.

Nick Cornoni pitched a complete game for Triton getting his third win of the season.  Nick gave up eight hits over the first five innings but held Amesbury hitless over the final two innings.

The Indians (7-7) left the bases loaded in the first and the fifth. 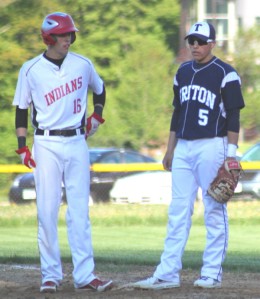 The biggest play in the game (in my opinion) was in the Amesbury half of the fifth inning.  To set the scene: the Indians had tied the score, the bases were loaded,  and the Vikings had already committed two errors (Billy Mical & Justin Cashman) in the inning.  A grounder came Justin’s way and his throw was low to first but Adam Chatterton made the scoop ending the inning.

Triton went on from that scary inning to get the two runs that spelled the final difference.

Nick Cornoni scored the first run of the game in the top of the second inning after leading off with a walk.  A wild pitch and a fielder’s choice got the senior to third.  Adam Chatterton’s fly ball to center drove in the first Vikings run.

Amesbury would tie the score in their half of the fifth but Triton added two more runs to win in the last two innings.

Vikings catcher Cote Wolcik saved the day in the third inning by corralling a wild pitch with an Amesbury runner on third base.

Shortstop Justin Cashman made a leaping catch to end further Indians scoring in the fourth inning.

Close calls in the infield had both coaching staffs unhappy.

Both teams return to action tomorrow.  Triton is at Hamilton-Wenham while Amesbury hosts Ipswich.

Devlin Gobeil had two hits, an RBI, and scored a run for Amesbury.

Dmitri Hunt had two hits for Triton.  The Vikings centerfielder had five putouts including three straight in the sixth inning.

Indians starter Andy Reidy gave up only three hits in the six innings he worked to go with six strikeouts.  However, the junior lefty walked eight batters and three of them scored.

Triton is now two wins away from making the post-season tournament.  The Vikings were 9-11 last season.

Amesbury turned a 4-6-3 double play in the fourth inning.

Nick Cornoni slides across with the first Triton run