Flannery O’Connor (#12) had ten points for Amesbury in the third period.

This game was anything but pretty as the two teams combined for forty-three turnovers and nineteen missed free throws.

How did Amesbury win?  The Indians had a 19-3 third quarter.  Flannery O’Connor (16 points) had ten points and two assists in the breakaway frame.  The Vikings (6-4), meanwhile, had seven turnovers in that same quarter and didn’t score at all in the final four minutes.

The run of good offense/defense by Amesbury brightened a dismal 18-18 first half for both teams.

Triton “won” the other three quarters but certainly not the crucial third quarter and that cost the home team.

Another factor in the Indians’ victory was the denial defense Maddie Napoli played on Tessa Lafrance.  Tessa did get fifteen points but eight of them were in the final quarter.

Outside accuracy was almost non-existent for both teams.  Amesbury found layups off turnovers and rebound breakouts.

It turned out that Amesbury had an excellent 2-2-1 pressing defense but because of their infrequent baskets we didn’t see much of it in the first half.

Late in the third period, however, was a different story, as AHS turned pressure into points.  The Indians closed the 3rd quarter with ten straight points.  Flannery had eight of those points; two of them off Triton turnovers, one on a full-court layup, and a 4th on a feed from Ali Napoli.

Given the opportunity in the first half to function without facing full-court pressure, Triton was much more comfortable.  They passed the ball and they saw to it that Erin Savage was in a position to make plays.

Defensively in the first half, the Vikings forced long shots and really swallowed up Amesbury penetrations.

At halftime, you didn’t know how the second half might go.  The Indians, however, did play most of the first half without foul-plagued Flannery.  The sophomore certainly made a difference in the third quarter.  She can rebound, pass, and score inside.

One scary moment in this game was when Maddie Napoli dove into the stands to save a ball.  Maddie collided with a man holding a baby as she saved the ball to her sister Ali.  Ali made a layup while Maddie made sure that things were okay in the stands…….and they were.

Amesbury came into this game averaging sixty-four points per outing.

The Vikings had won four straight before losing their last two.

The undefeated Indians have yet to face Pentucket, Newburyport, and Manchester-Essex.  All of those teams have winning records.

Tessa Lafrance puts in a rebound

Julia LaMontagne had five baskets and four of them were off feeds from Flannery O’Connor.

Triton box from the game

Ali Napoli scores while her sister Maddie (in the background) checks on spectators. 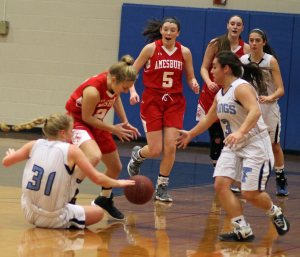 Maddie Napoli gets to the basket 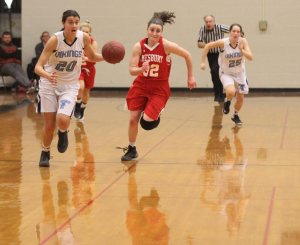 Tessa Lafrance on a break with Abbie Sartori chasing

Bridget Sheehan looks for an opening

Chelsea Lynch surrounded by a trio of Vikings 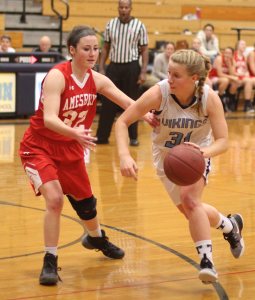 Tessa Lafrance (19 points) had her way inside against Hamilton-Wenham

Cate Blatchford scored the first basket on a full-court drive

Hamilton-Wenham (4-4) started fast with layups by Cate Blatchford and Cecily Szady but after that the home team was the only team making shots for over twelve minutes of playing time.

Kelly Walsh did miss four free throw attempts during the disastrous segment and there were five turnovers but it was the shooting from the floor that killed the Generals.

My research told me that HW was intent on pressuring full-court but in order to do that a team has to make shots and that just didn’t happen on this evening.

Tessa had ten of her points during the nineteen-point run. Other contributors were Erin Savage, Morgan Snow (4 points), and Alexandra Kennedy (3-pointer).

The best moments for HW were at the start (quick 4-0 lead) and at the end when they shut down Triton for the final 4 ½ minutes, created six turnovers, and tallied seven points (Lauren Flynn, Kristina Renaud, and Haley Rivers).

6’ Tessa Lafrance was a matchup nightmare for the shorter HW squad. Tessa can take and make from long range, although she had only one from long range versus HW. Closer to the basket, however, Tessa’s height and strength overwhelmed the Generals. And from what I saw in this game, her teammates will find her when she’s in close. Erin Savage collected several assists this way.

Best pass of the game may have been Alexandra Kennedy’s to Tessa for a layup in the last quarter.

Junior Erin Savage (9 points) was a crowd pleaser early in the 4th quarter when she rebounded a Tessa miss, scored and was fouled.

Both teams return to action on Monday night (6:30PM). Triton is at Amesbury while HW hosts Pentucket.

Hamilton-Wenham was 2-18 last season with one of those wins being in their opener over Triton, 52-50.

Triton was 11-11 last season going out in the D2 North first round to Wakefield.

Dive for the ball!

Lauren Flynn (1) gets an opening

Tessa Lafrance shoots in the lane 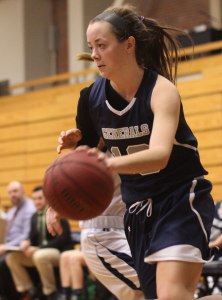 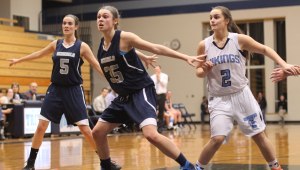 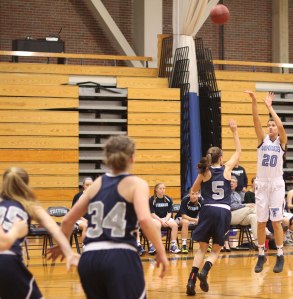