The #3 Lancers (16-4) had won eight straight before losing to their neighbors from Derry.

There were golden chances for both teams. Not many but enough to make you think that it might take only two halves to settle things. But PA goalie Sam Mitchell and LHS goalie Jackie Luckhardt had other ideas.

The talented seniors were key to getting this title match to penalty kicks.

In PK’s, the hero of the game became PA goalie Sam Mitchell. When the Lancers Gretchen McGrath hit the crossbar in Round 3, the Astros had the advantage. Finally, in Round 5, Sam guessed right and dove left to smother Mackenzie Donovan’s attempt and Pinkerton had their first title.

The Lancers’ loss lowlighted a forgettable weekend for Londonderry. The night before the LHS boys soccer team lost in the finals to Concord.

However, earlier this year in March both the girls and boys basketball teams from Londonderry won titles on the same weekend.

Courtney Velho had a penalty kick in the first half that went wide.

Nicole Alves drew tight coverage from Halle Hamilton most of the game.

Laurel Goding and June Cranmer got in clean on GK Sam Mitchell but couldn’t get a shot off.

Billy Ball Stadium was a nice setting for the title game. Nice turf and plenty of seating. My camera wasn’t so sure about those lights that came on as the game went through two OT’s and then PK’s.

Sam Mitchell rushed by teammates after game-winning save 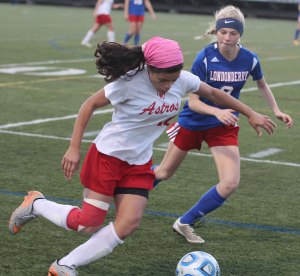 Nicole Alves tries to get past Gretchen McGrath

Reanna Romano on the move

Another Jackie Luckhardt save 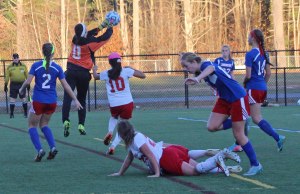 Jackie Luckhardt makes a save for Londonderry

(Manchester NH) No need for any last-minute heroics by Londonderry in this one.

The #2 seed Lancers started fast and never trailed as they defeated Winnacunnet, 48-33, to take a second straight Division 1 title.

The Friday night encounter at the SNHU Fieldhouse lacked the end-game tension of a year ago when Londonderry rode a late three by Brittany Roche (assisted by Jackie Luckhardt) to an exciting 57-56 victory over Bedford.

#9 Winnacunnet reached the finals by getting the ball inside to Meg Knollmeyer (nearly 20 points per game) and getting to the foul line (83 free throws to opponents‘ 44 free throws). 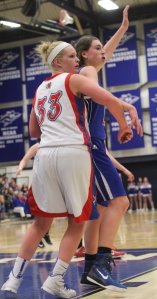 In the title game the Lancers (20-2) collapsed around Meg and wouldn’t let the talented junior or her teammates get to the rim very often.  The Warriors (14-8) had only eight free throws while Meg Knollmeyer was held to eleven points.  Tara Burke and Noelle Lambert were big in denying passes to the interior.

There were turnovers a-plenty in this game.  The number of passes to no one in particular astounded me.  It is important to note that some turnovers are more costly than others.  The first quarter is a prime example.  Londonderry got off to a great 8-0 start.  All eight points came off of Winnacunnet miscues.  That’s costly!

The Warriors played their best minutes of the game after getting down by eight. They got inside (3 layups) and closed to within two (10-8) after a quarter.  Meg Knollmeyer had two of the layups.

The team from Hampton was still within two (15-13) three minutes into the second quarter after a 3-pointer by Molly Britton.  But then the wheels came off for Winnacunnet as the Lancers ran nine unanswered points over the next three minutes to break away, 24-13.  Jackie Luckhardt had a 3-pointer, a rebound, and an assist in the separating segment.

Winnacunnet moved to within two possessions (30-24) on Emily Britton’s 3-pointer with 2 ½ minutes to go in the third quarter.  But the rest of the quarter was all Londonderry with a jumper by Brittany Roche and a long one by Kelsey Coffey.  That ending restored the Lancers’ eleven point lead (35-24).

The Warriors go inside a double-digit deficit briefly in the final quarter on Molly Britton’s second three-pointer and later a layup by Meg Knollmeyer.  However, two straight layups by Tara Burke restored the Lancers’ double-digit spread and they played keep-away on offense the rest of the way.

Junior Jackie Luckhardt had nine turnovers for Londonderry but the rest of her stat line had plenty to do with Londonderry winning the championship.  Jackie had eleven rebounds, seven points, nine assists, and six steals.

I saw at least two inbounds layups by Noelle Lambert assisted by Jackie.

This game was long on contact.  Meg Knollmeyer was staggered by a Kelsey Coffey screen in the second half.  Brittany Roche needed help from the trainer after she went down hard.

Winnacunnet scored just one layup in the second half.

Londonderry defeated Winnacunnet, 58-47, during the regular season.  Molly Britton had six 3-pointers for the Warriors while Meg Knollmeyer tallied seventeen points to go with eleven rebounds.  Key to the title win was significantly lessening the production of Molly and Meg in the second meeting.

Greatly appreciated getting a full set of stats from the SNHU stat crew. 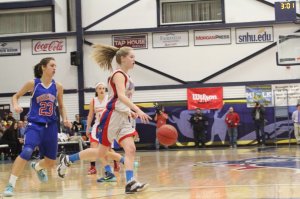 Kelsey Coffey takes time off the clock in the 4th quarter

Winnacunnet gets the runnerup trophy

Brittany Roche hit the game winner in the 2014 title game

Kelly Arsenault hemmed in by a trio of Lancers

(Hooksett NH) What a finish!

Junior Brittany Roche broke a tie with a clutch three for Londonderry with twelve seconds left and the Lancers upset Bedford, 57-56, to take the Division 1 title at SNHU on Sunday night.

Gatorade’s NH Player-of-the-Year Aliza Simpson finishes a winner and will be off to UNH in the fall.  Aliza had sixteen points to lead all scorers as well as six assists.

The ending of this year’s D1 championship finals will be hard to forget for anyone who was part of the full house at SNHU.

The Bulldogs (21-1) took a five-point lead (54-49) into the final 2:49 of the game.  But in a minute the Lancers drew even with an old-fashioned three (Jackie Luckhardt) and a jump shot (Aliza Simpson).

On Bedford’s next possession, Aliza Simpson tracked down a loose ball in the corner and called a timeout.

With no shot clock, Londonderry (19-3) had plenty of options with 1:20 left.  They opted to run the clock and look for something with very little time left.

At that point I would have bet the store that Aliza would get the final shot on some sort of drive toward the basket.  And that may have been Londonderry’s plan.

What actually happened was very surprising.  With close to fifteen seconds left sophomore Jackie Luckhardt drove in from the right toward the basket.  I thought at the time that it was way too early for a shot to be taken.  Jackie, however, did not shoot but instead drove under the basket and tossed a bounce pass to junior Brittany Roche in the left corner.  Brittany, called “Big Shot” by her coach and teammates, was wide open and nailed a truly big shot with twelve seconds left giving Londonderry a 3-point lead.

Plenty of time for Bedford to get those three points back and they had at least two timeouts left.  McKenzie Brown misfired on their first 3-point attempt but Bedford maintained possession.  After a timeout Brianna Purcell attempted to tie the game with a second three.  That try was short and Nicole Tucci put in a 2-point rebound at the buzzer.  The Bulldogs still trailed by one, 57-56, and Londonderry’s celebrating began.

The Lancers made the first attempt to separate getting nine straight late in the second quarter to turn a 19-17 Bulldogs lead into a 26-19 deficit with a minute left.  Aliza Simpson had a three (off the backboard) and a jump shot during this run while Brittany Roche had a jump shot and Tara Burke added a layup.

McKenzie Brown gets a rebound

Bedford’s best collection of offense was in the third quarter.  During 4+ minutes the Bulldogs turned a 29-22 deficit into a 35-29 lead with thirteen unanswered points.  McKenzie Brown converted two rebounds, Brianna Purcell had a three and a driving layup, Ali Glennon added an old-fashioned three, and Haley Driscoll made a free throw.

As the points in the 13-point run continued to roll up for Bedford, I thought the Bulldogs were on their way to taking total control, but it didn’t happen.  Casey Evans stopped the bleeding for the Lancers with an old-fashioned three and Elizabeth Caron hit a jump shot putting Londonderry right back in it.

There were three ties and three lead changes in the last quarter in a game that’s outcome was in doubt until the end.

Brianna Purcell started out guarding Aliza Simpson but two quick fouls later it was Ali’s turn to defend Aliza.  I thought Ali did a great job of hounding Aliza everywhere she went.  Anyone taking pictures of Aliza with the ball is sure to have Ali somewhere in the picture.  Aliza did end up with sixteen points but it took her fifteen shots to get there because of the defense she faced.

Jackie Luckhardt of Londonderry led everyone with seven assists and none bigger than the one that set up Brittany Roche for what became the game-winning three.

The killer stat for Bedford was free throws.  They missed eleven of them (17-for-28) and one was the front end of a one-and-one.

Aliza Simpson missed eight games and all three of the Lancers’ losses including a 50-36 one to Bedford.

Bedford won easily over Keene, Trinity, and Nashua North to reach the D1 finals.  Londonderry had a tight one with Pinkerton Academy (42-38) in the D1 semis.

Great crowd with plenty of cheering and chanting from both sides.

Hats off to the SNHU security for completely preventing the dangerous end-of-game student rush onto the court.

Thanks to the SNHU staff for providing me with half-time and full-game stats.  Lessens the guesswork. 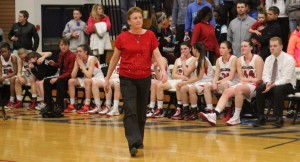 Aliza Simpson tries to get free 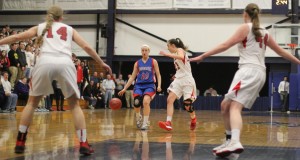 battle for the ball 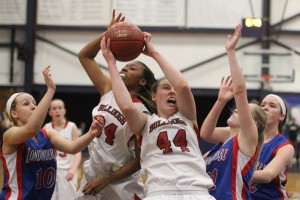 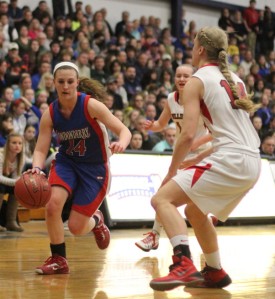