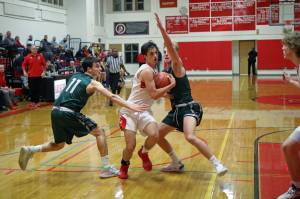 (Amesbury MA) There was no off button for the Amesbury Indians on this night.

Amesbury (8-3) jumped all over a very good Manchester-Essex team with a convincing, 77-58, win on Monday night in Cape Ann League action.

The Indians had a 25-5 final quarter against Hamilton-Wenham the other night and suffered a painful 63-50 loss to the Generals.

“We learned a lot from that loss,” said AHS coach Tom Comeau post-game.  “We have to take care of the basketball, win the 50/50 battles, and rebound.  We took care of all three phases tonight.”

Kellen Furse (11 points) passes out of an Amesbury double team

“We scored fifty-eight points,” said ME coach Tim St. Laurent afterwards.  “That should have been enough to win but we couldn’t contain them on the defensive end.  They were making shots and they were attacking us.  We didn’t keep them from getting to the rim.”

Amesbury built up a twenty-point lead (41-21) in the first half.

The Hornets cut that lead to eleven (61-50) at the start of the final quarter.

“I thought in the second half that we could get all the way back, but Amesbury was the hotter team tonight,” said Coach St. Laurent.

When ME narrowed the lead to eleven, the Indians answered with their third nine-point run of the game and back up the lead went to twenty (70-50) with four minutes left.

Senior Jaden Keliher (26 points) scored points in the breakaway first half (19) and then handled ME’s backcourt pressure in the second half.

“We came out and played hard,” said Jaden afterwards.  “We played together.”

Junior Kyle Donovan (14 points) dominated the inside for AHS.

“Kyle was a ‘man’ out there,” said Coach Comeau.  “He plays hard and he’s a smart player.”

Tonight’s game did not get out of hand immediately.

The Hornets trailed only, 10-7, after five minutes. But then the first nine-point run kicked in.  Jimmy Gjikopulli (13 points) turned an ME miscue into a layup and followed that with a successful jump shot.  Jaden Keliher added a layup and a free throw and Ethan Catania converted a rebound.  Up the home team went, 19-7.

The Indians started the second quarter with another collection of consecutive points.

Play on the floor

Rocco Kokinacis (11 points) got to the rim twice.  Jimmy Gjikopulli converted his own rebound and Jaden Keliher added an old-fashioned 3-point play.  That boosted the AHS advantage to 28-11 only two minutes into the second quarter.

That lead would extend to 60-27 with two minutes left in the third quarter.  It looked like a cruise to the final buzzer for the Indians.  The Hornets, however, had other ideas!

Over the next 2 ½ minutes of playing time, the Hornets that I saw defeat Bishop Fenwick in double overtime, showed up.  Their defense was effective, and they made shots.  Visions of a big comeback started to take shape.

Sophomore AJ Pallazola sparked the Hornets with a jump shot and two assists as ME put together a 13-1 segment stretching into the final quarter.

That 61-50 deficit looked manageable with 7 ½ minutes of playing time remaining.

“We called a timeout and things got settled down,” said Jaden Keliher.  “Then we went out there and kept them from making a comeback.”

Twice Kyle Donovan scored from in close and Jaden Keliher got to the basket.  Then Jimmy Gjikopulli got loose in the lane and added a free throw.  Back the lead went to twenty (70-50) and the Indians were home safe.

Sometimes backcourt turnovers will lead to rallies, but the Hornets pressure couldn’t get there tonight. 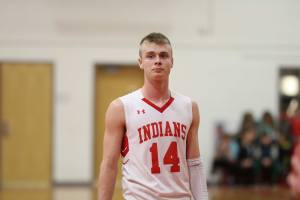 “Jaden (Keliher) is strong with the ball,” said Coach Comeau.  “We have three guards who really play well so it’s hard to press us.”

Jaden Keliher: “We wanted to take away Kellen Furse and #12 (Jack Shaw).  Kellen is a great player.  I have a lot of respect for him.  I’ve grown up playing him.”

Coach Comeau: “Hamilton-Wenham came back against us and we let it snowball and get away from us.  We discussed before the game that we needed to learn from it.  They’re fast learners!”

Jaden Keliher: “Points are nice but getting a W at the end is what it’s all about.”

The Indians were 9-10 last season.

Pentucket players were in the audience at tonight’s game.

Coach Tom Comeau and Jaden Keliher in the closing minute 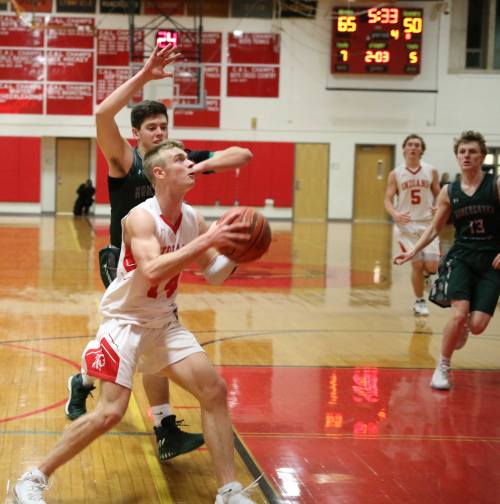 Jaden Keliher in close for two 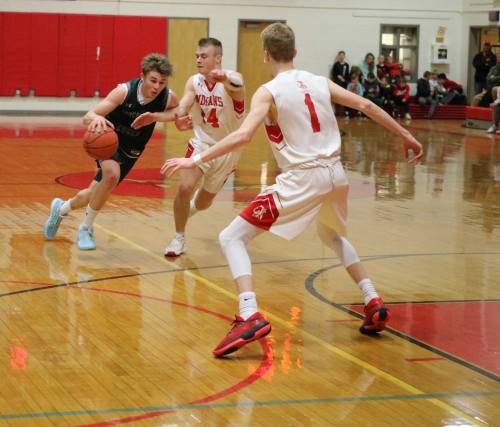 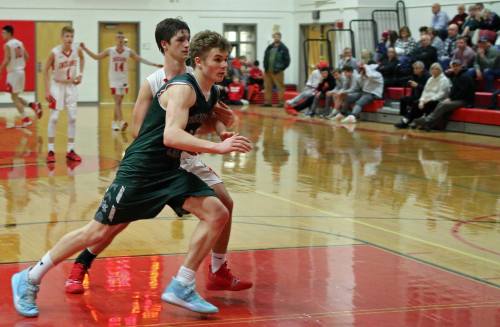 Luke Martin (5) had eighteen points after the first half.

(Amesbury MA) Luke Martin was part of Amesbury’s problem in the first half.

The second half?  He was a big part of the solution.

Amesbury rallied after a half of subpar defense/offense to reach overtime with Triton and then dominated overtime to scratch out a, 61-58, win on Tuesday night.

“We played a zone early and Triton made a bunch of three’s,” said Coach Tom Comeau afterwards.

The solution?  Change to a man-to-man and apply ¾ court pressure after baskets.

“That pressure had an effect,” said Triton coach Ted Schruender.  “We had chances to score and didn’t.”

The Indians (3-5) trailed by fourteen (31-17) at the half and the way Triton was shooting made you think that the lead might get bigger in the second half.

“I challenged the team at halftime to play better and protect the homecourt,” said Coach Comeau.  It worked for certain.

But the Vikings (5-6) didn’t go away despite the improved play of the home team.

However, the Triton lead started to shrink in the second half and when Jimmy Gjikopulli hit a runner in the lane with two minutes left in regulation, Amesbury was ahead for the first time, 48-47.

Enter Luke Martin.  Actually, Luke had already entered (finally) in the second half and had accumulated ten points in Amesbury’s second half revival.

Luke Martin from the corner over Max McKenzie

But now down four with time running out, Luke nailed his third triple of the second half to get AHS within one.  Triton’s Kyle Odoy followed with one-of-two free throws.  Junior Jimmy Gjikoupulli finished the Amesbury comeback with a layup just before the buzzer sounded and the game reached overtime – 53-53.

Amesbury continued their defensive pressure in the four-minute overtime and Triton struggled against it.  The Vikings had three turnovers to show for the first two minutes.

Meanwhile the Indians had a fallaway from Jaden Keliher and two free throws from Luke Martin. Then it was Luke again with 1:51 left hitting a large three.  AHS now had a seven-point lead (60-53).

Credit Triton.  Game over?  Not by the way they answered.  Max McKenzie went to the hoop twice getting layups, and on the second one he was fouled.  Max made the shot and now Triton was within two (60-58) with forty seconds left. 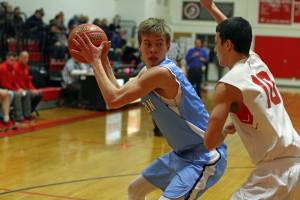 Plenty of time.  Amesbury opted to use as much clock as possible before shooting.  Jaden Keliher took the shot, missed, and it looked as if Triton might have fifteen seconds to get an ending they liked.

Looking for a hero for Amesbury?  It was Kyle Donovan getting the offensive rebound off Jaden’s miss.  That extended the possession and Triton was forced to foul.  Jimmy Gjikopulli made one-of-two to give the Indians a 3-point lead.  Triton struggled on their final possession and were unable to get off a three to possibly tie the game.  Amesbury had an exciting 61-58 victory.

Luke Martin: “We got things going in the second half.  We heated up.  Even after I missed a few I had to keep shooting.  It was a good idea by Coach to put pressure on them because they didn’t handle it too well.”

Camden Keliher (16 points) puts up a floater in the lane

Coach Schruender: “It was a good competitive game that we let get away from us.  It’s a learning experience.  We’ll work on things and make it better.”

TJ Overbaugh of Triton made four three’s including three in the Vikings breakaway first period.

Triton defeated Amesbury 42-41 in December.  Neither Nick Everett nor Luke Martin played for Amesbury in that one.  TJ did and he made three triples.

Triton ended up with twenty turnovers (by my count) while Amesbury had only ten.

Max McKenzie (22 points) to the rim 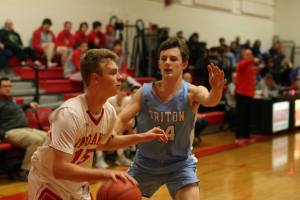 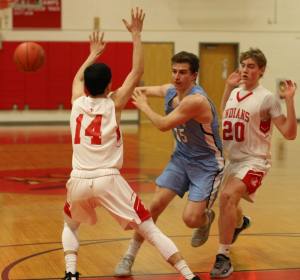