(Danbury CT) “This is a whole new way of playing,” WestConn coach Kimberley Rybczyk told me afterwards.  No doubt about it.

Western Connecticut started fast, played everyone in every quarter, and routed Newbury, 118-68, in the opening game of the WCSU Hat City Tournament on Friday night.

During this past off-season, Coach Rybczyk decided to challenge herself and switched to an uptempo style. “I have been coaching twenty-five years and chose to come out of my comfort zone.  I spent the whole summer studying this style of play.”

Today was the sixth time the 6-4 Colonels have gone over one hundred points.

Western Connecticut was a bad matchup for the visiting Newbury Nighthawks.  They have been averaging 64 points per game and even though they passed that number against WCSU they still lost by fifty!

Newbury (5-5) was overwhelmed by the pace and the pressure from the get-go.  During a two-minute stretch in the first quarter a 3-2 game became 15-2.  It went downhill from there.

Coach Kimberley Rybczyk in front of the WestConn bench

One feature of the WestConn style of play was a complete change of players every few minutes.  “I want kids that are part of my program to get their feet out on the floor,” said Coach Rybczyk.  “I told my best players before the season they would play fewer minutes, but they would get twice as many shots and score twice as many points.  When that happened in our first two games, the new style of play was no longer even questioned.”

The steady influx of fresh bodies enabled the Colonels to wear out the Nighthawks in a hurry.

On offense the Colonels ran every time they had the ball.  Later in the game, the speed turned up a steady flow of layups.  Throughout the game, the Colonels got great looks at 3-point shots and drained twenty-one from long range.

Junior Jancy Sherwood led all scorers with twenty-five points including six from beyond the arc.

On defense the Colonels pressured full-court.  The Newbury player inbounding the ball was ignored and the pass in made to be very difficult.  Once the ball was inbounds, a double-team arrived quickly.

In the halfcourt, the Colonels were always looking for places to apply double teams.  Those forty-six Nighthawks miscues tells you how effective WestConn was at it.

Destiny Spears of Newbury may well be the most tired player in Danbury tonight after logging thirty-six minutes.  Destiny finished with a very unusual triple/double: 15 points, 10 rebounds, and 14 turnovers.

The Nighthawks had a shocking forty-six turnovers in tonight’s loss.  The team from Massachusetts was victimized frequently by double teams that led to bad passes.

Jessica Davis of WestConn had a double/double as she put twelve points together with ten rebounds.

The best stat line of the night may have been by Genesis Torres: 15 points, 9 rebounds, 7 assists, and 7 steals.  Nice work by the Stratford (CT) sophomore.

The Colonels have yet to make the uptempo style work in the Little East Conference where they are currently 0-2. 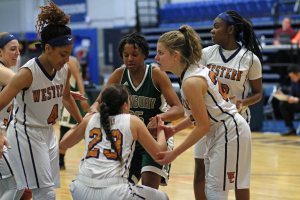 “I would rather teach the players how to play rather than plays,” said Coach Rybczyk.  “I got tired of teaching kids sets.  I want to teach them how to read, how to react.”

“We are early in on this system,” she added.  “We have plenty to work on.”

Western Connecticut moves on to the finals on Saturday.  Newbury gets the consolation game. 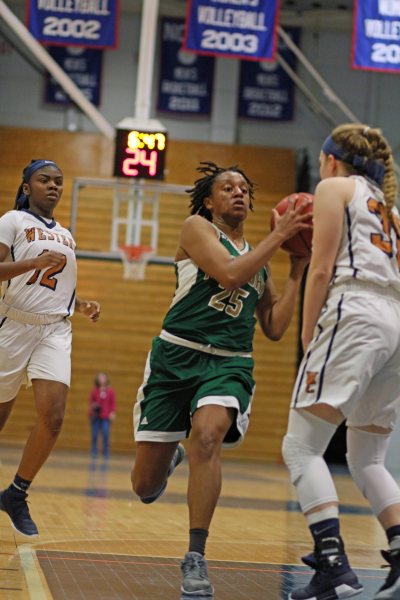 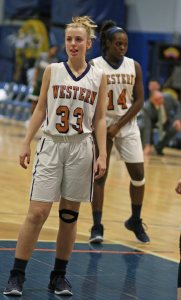 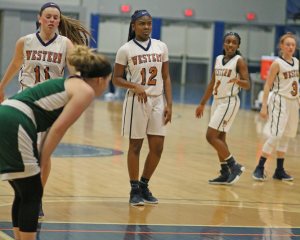 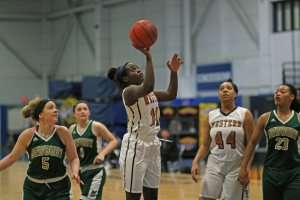 Tashai Price in for two