(Bethel CT) The Bethel Wildcats hit the visiting Brookfield Bobcats three different ways in the first half and that was enough for a 20-0 win on Thanksgiving morning at Bethel High School.

Bethel (9-2) has won nine straight after losing to Joel Barlow and Newtown and will host a Class M playoff game on Tuesday night.

Brookfield (9-2) could have moved past Bethel with a win.  They will now be a road team in the Class M quarterfinals on Tuesday night.

The sun may have been shining at Bethel but the wind (20+ MPH) made it feel like weather in the teens.  A good crowd ended up in attendance but there were very few early birds!

Bethel’s opening drive (77 yards) was so impressive because they went directly into that wind converting 3rd downs and 4th downs in the march.  Nick Silva swept right and vaulted over Bobcat Ben Martone for the score at 4:30 of the first period. 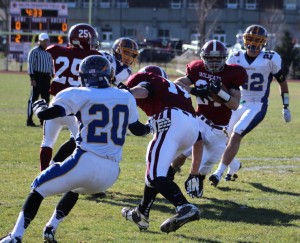 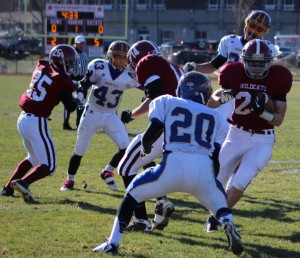 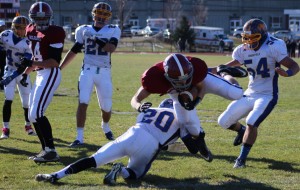 Nick Silva vaults over Ben Martone into the end zone

The wind that Bethel had rushed against factored into Tom Lempereur’s extra-point attempt and his kick sailed wide.  Bethel led 6-0.

Early in the second quarter Bethel did something they haven’t done all year, they blocked a punt.  And not only did they block it, but they carried the carom in for a score.

The hero on this one was Andre Hayles.  Brookfield got into a 4th down situation at their 20.  When Bobcat punter Dane Borges bobbled the snap it gave Andre time to get in clean from the left side nearly catching the ball off Dane’s foot.  Andre picked up the ball on the Brookfield 10 and sped into the end zone.  This action was with nine minutes left in the second quarter.  Tom Lempereur connected on this extra point giving Bethel at 13-0 advantage. 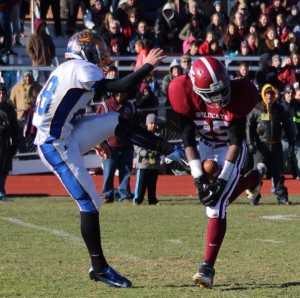 Andre Hayles gets the block

Bethel got the ball back with 45 seconds left until halftime after Austin Allaby nearly blocked a second Brookfield punt.  Joe Pietnik scrambled to the Brookfield 40 before his brother (Jared) connected with Sloan Austermann to the Brookfield 20.

There was time for two plays as it turned out.  The Wildcats used the same play twice…………throw the ball into the end zone and see what happens.

First time the ball sailed over Cal Daniels and nearly was caught by his brother Will.

The second time QB Jared Pietnik gave his pass a little more loft.  This led to a jump ball situation between the Wildcats Will Daniels and the Bobcats Ben Martone.  Will outjumped Ben for the ball and Bethel had its third touchdown with only 1.6 seconds left in the half.

Just miss on first pass into the end zone

Despite the deficit Brookfield led off with an impressive drive early in the second half and ended up deep in the Red Zone.  Several drops on Brad Westmark passes, however,  kept the Bobcats out of the end zone.

Meanwhile, the second half Wildcats were perfectly content to take few chances.  They kept the clock running with rush after rush.  QB Joe Pietnik was the most frequent ball carrier.

Bethel’s Austin Allaby was injured early in the second half.  He left on a stretcher but to the relief of everyone he waved to the crowd on the way out.

The weather was extremely challenging.  If I wanted the sun to my back (good photography idea) I had to have the strong wind in my face.  Some truly Good Samaritan gave me a hand warmer in the fourth quarter. 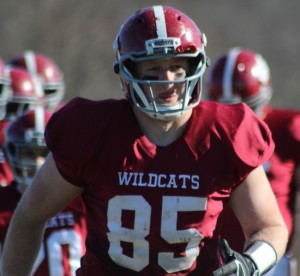 Cal Daniels of Bethel has a scholarship to Division 1 Stony Brook.

scarey moment at start of second half