Devan Harris (35 points) made shots in close all night long.

(Beverly MA) Danvers made only one shot from the outside, missed ten free throws, and didn’t take good care of the ball (eighteen turnovers) but they still found a way to win.

How?  The Falcons (20-3) totally dominated on the inside.  Control of the interior enabled Danvers to edge Belmont, 62-59, on Tuesday night to reach the Division 2 North finals on Saturday at the Tsongas Arena (3:45PM).

Peter Merry (6-8) had six blocks (by my count) and discouraged the Marauders a number of times from even taking shots close to the basket.

This was a game in which leads were short-lived.  There were eighteen lead changes and the final one came with twenty-three seconds left. 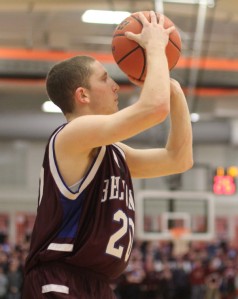 Keith Burns lines up a shot

#6 Belmont (18-7) jumped ahead, 59-58, on a three by senior Keith Burns assisted by Matt Kerans with fifty seconds left in the game.

After a Belmont timeout, Devan Harris tried an outside shot and missed but Kieran Beck came up with the offensive rebound and was fouled.

Kieran connected on both pressure shots giving the Falcons the lead, 60-59, with twenty-three seconds remaining.

Matt Kerans tried a 3-pointer from straight away which rimmed out.  Devan Harris rebounded and was fouled.

Devan made one of two giving Danvers a 61-59, edge with twelve seconds left.

Matt Kerans went for another three, with Kieran Beck defending, and missed again with 1.4 seconds to go.  Freshman Devon Allen got this rebound, was fouled, and made one of two attempts.

Matt Kerans fires a three in the closing seconds

Belmont ended up with less than a second to try for a three.  Kieran Beck intercepted the pass in and the celebrating began.

Belmont was clearly at a size disadvantage from the get-go.  Adam Kleckner (6-4) was their tallest player and he fouled out at the end of the third quarter.  Adam had a quiet six points in this game.  In the Belmont win over Salem in the D2 North quarterfinals, Adam had twenty-one points.  Earlier in the season, in a win over Lexington, the Belmont junior put up thirty-six points and collected fifteen rebounds.  No question the Marauders missed Adam at both ends of the court in the final quarter. 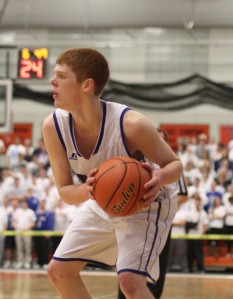 It’s hard for me to imagine a team winning a game in which all their field goals (twenty), but one (Kieran Beck three), are scored in the paint.

Belmont connected seven times from long range.  They came very close twice to an eighth 3-pointer in final twenty seconds that could have given them the victory.

The Marauders trailed 12-10 in the first quarter before running off eight straight points.  The points came from Adam Kleckner with four and Justin Wagner and Jalyn Hinton two each.

Trailing, 18-12, it was #2 Danvers’ turn to run consecutive points.  The Falcons put together a steak of nine unanswered.  It was Devan Harris scoring on his own miss and following that up with a layup on a nice pass from Mark McCarthy.  Kieran Beck did the rest with the lone Danvers outside score and two free throws.

Peter Merry gets a rebound

The Marauders broke a 43-43 tie with a seven-point run stretching into the final quarter.  A layup and two free throws by Matt Kerans were followed by a long one from Keith Burns.

The resulting 50-43 spread with 7 1/2 minutes left looked like the beginning of the end for the Falcons but they came back with three inside scores (layups Devan Harris and Rashad Francois plus a converted rebound by Devan) and cut the Belmont lead to one (50-49) six minutes left.

There were five lead changes the rest of the way and plenty to cheer about for both fan bases.

Adam Kleckner saves a ball going out of bounds

Former Falcon point guard Eric Martin was in the house.  No question Coach John Walsh would have found a spot for him on the floor especially in the second half when Danvers had thirteen turnovers.

But despite the deficiencies the Falcons found a way to win and extend their improbably season.  No one imagined such a successful season for a team losing four starters and Vinny Clifford.

Kieran Beck and Peter Merry each had ten points for Danvers.

Ben Lazenby (16) and Keith Burns (14) had double figures for Belmont.

Belmont is out of the Middlesex League while Danvers plays in the Northeast Conference.

There was certainly a good crowd on hand but the noise and numbers hardly compared to the reported 3,500 in attendance for the St. John’s/Central Catholic game the night before. 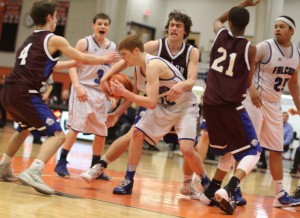 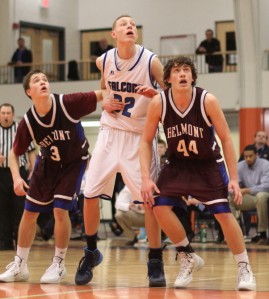 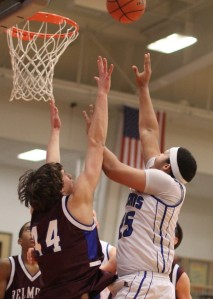 Aaron Croce goes for the block