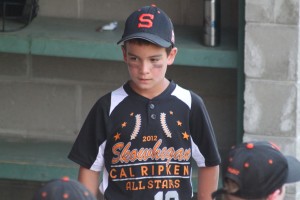 Lucas Patchell was the winning pitcher and drove in three runs for Skowhegan.

The teams had played eight innings two nights ago with Andy Valley walking off with a 10-9 victory.

In this exciting game both teams went down…. but not out, giving a good crowd plenty to groan and cheer about during a pleasant evening.

A big eight-run third by AV put Skowhegan behind, 10-1.  In the fourth Skowhegan collected three runs and AV came up with two of their own and had runners on second and third with one out.  At that moment the mercy (10-run) rule was lurking and would have kicked in if those two runs had scored.  Lucas Patchell, however, came on in relief and got Matt Johnson to fly out and Wyatt Williamson to pop out and Skowhegan was still alive.

Later it was AV’s turn to go down as Skowhegan put up ten runs over the next two innings (5th and 6th) as AV pitching (eight walks and five hits) fell apart.

With those ten runs Skowhegan led 14-12 in the bottom of the sixth (last inning).  AV went down to their last out before Jake Mills (5 hits) singled and Janek Luksza and Matt Johnson walked. Suddenly the bases were loaded.  When Wyatt Williamson singled past second two runs scored (tying the game) and Matt Johnson reached third.  Now Skowhegan was one hit away from being eliminated but again Lucas Pachella escaped by striking out Rodney Bean to send the game into extra innings.

Skowhegan put the game away with four runs in the top of the seventh.  Rodney Bean came on to pitch for AV and was wild (3 walks/1 hit batsman) and Skowhegan sent ten batters to the plate.  Matthew Berry drove in the actual game winner with a single past short scoring Hunter Washburn.

Andy Valley had a couple of hits (Keegan Chase and Charlie Morton) in the seventh but Lucas Pachella was not scored on and Skowhegan had an 18-14 win.

Andy Valley collected fourteen hits.  Jake Mills had five of them while leadoff batter Charlie Morton and catcher Wyatt Williamson had three each.  Charlie added three runs to his finals stats while Wyatt and Jake each had three RBI.

Skowhegan had hitting heroes up and down their lineup.  At the bottom of the order, Hunter Washburn and Carter Hunt combined for five hits and six runs scored.  At the top of the order, Matthew Berry scored three runs, Lucas Pachella had three RBI and scored two, Marcus Christopher drove in four runs, and Braden McCarty had four of Skowhegan’s fifteen this.

The clutch pitching of Lucas Pachella was a huge part of the Skowhegan win.  Lucas finished the final 3 2/3 innings and escaped several AV threats.  He allowed only two runs while his teammates were scoring eleven.

It was a great game to watch if you didn’t have a horse in the race.  However, most folks on hand were not so fortunate and for them the game was more stressful than exciting.

Anyone who ever visits the Field of Dreams in Harrison comes away impressed with the setting.  You just would never expect to find a place like it in such a remote area.

The win by Skowhegan necessitated a second game between the two teams to determine the champion.  I headed off to the fireworks for Harrison’s Old Home Days and missed that game.

(If the scores for these tournament games are being posted online somewhere I confess that I have yet to find that site.)

Jake Mills – drove in four runs and was the winning pitcher

AV is undefeated after three games in the double-elimination tourney but were fortunate to escape with a win against hard-hitting Skowhegan on this day.

Skowhegan will need a victory in their next game at Harrison at 6PM on Wednesday to stay alive while Andy Valley plays at the same site on Thursday (5PM) chasing its fourth straight win.

AV jumped ahead 8-3 in the first and that lead looked solid until the top of the last inning (sixth) when Skowhegan erupted with six runs on eight hits to grab an 9-8 advantage.  But a Charlie Morton triple, followed by a Jake Mills single off second baseman Zeb Tibbett’s glove, brought Charlie home and sent the game into extra innings.

“Glittering” is the only way to describe the chances for both teams in the seventh.  Skowhegan had runners on  second and third with no outs while AV had a runner (Keegan Chase) tagged out at the plate on David Obert’s throw from right field.

“Super glittering” would best describe Skowhegan’s chance in the eighth.  They were issued three walks but had one runner thrown out stealing and another picked off first on a liner back to AV pitcher Jake Mills.

AV finally won the game in the bottom of the eighth.  They put the first two runners on with a walk and a botched fielder’s choice.  A nice catch by Ryan Savage in center prolonged the inning but Rodney Bean’s hit was well over the leftfielder’s head and brought home the winning run.

Skowhegan lost despite scoring nine runs, collecting eighteen hits, and leaving runners on in every inning.

Charlie Morton and Jake Mills each had three hits for Andy Valley.  Jake also drove in four runs and got the win with two innings of scoreless relief. 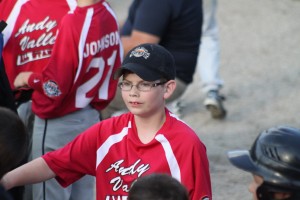 Riley Volpe – made a big catch

AV centerfielder Riley Volpe saved a couple of runs in the fourth with his catch of a line drive.

The press box at RADR Field was an excellent place from which to view a game.  The only drawback was the fencing that limited picture taking.  On the other hand, that fencing did offer protection to someone was limited reflexes!

(All the pictures enlarge significantly if you click on them.)