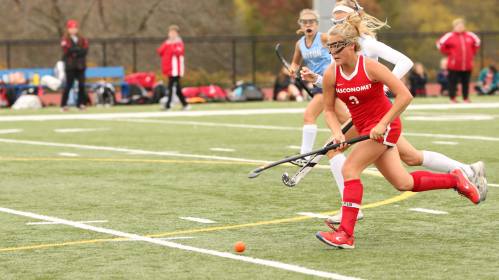 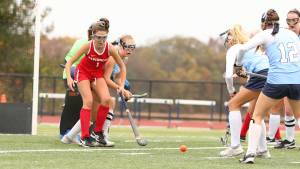 This afternoon the Lady Chieftains (14-0-2) put up five of them, including four in the first half, and that was enough for a field hockey win over Triton, 5-2.

That Masco scored was no surprise; they now have sixty-nine goals in sixteen games.

That Triton (10-4-2) scored against Masco was a big surprise. Why?  The last time the Vikings had a goal against the Chieftains was on September 11, 2015!  That shutout lasted seven games. 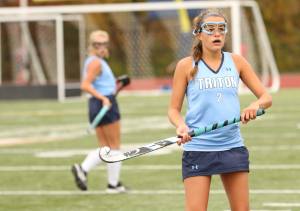 Gianna Conte had a goal and an assist for the Vikings

D1 commit (UMass Lowell) Gianna Conte assisted on Triton’s first goal (first half) and tallied their second one in the second half.

Junior Brianna Hood was the Viking set up in the first half.  That goals evened things at 1-1.

The Lady Chieftains responded with three unanswered goals over a ten-minute segment.

“I was proud of the girls for fighting back after being scored on,” said Masco coach Maggie Bridgeo.  “It hasn’t happened very often.”  The LC’s had only allowed SIX goals in their previous fifteen contests.

Two of Masco’s answering goals were by freshman Maggie Sturgis.  In both instances it was sophomore Lily Conway assisting from the right.

Maggie Sturgis (1) gets a goal

“Lily did a great job of getting the ball down the wing and crossing it,” added Coach Bridgeo.

“They outplayed us, “explained Triton coach Donna Andersen afterwards.  “We were, however, much better in the second half and they didn’t do a lot of subbing.”

Gianna Conte’s goal made it a two-goal game with twenty minutes left in the second half but the home team would get no closer. 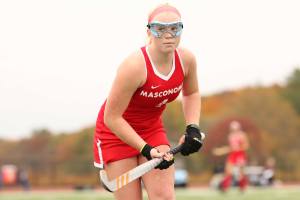 Kate Zamagni’s score with 8:24 remaining gave Masco a 5-2 lead and more than enough separation to gain their 14th win of the season.

“Kate’s goal was probably the prettiest of them all,” said Coach Bridgeo. “It was a corner play and Kate took a straight shot.”

Coach Andersen was impressed with Masco: “They have a lot of speed and stick skills.  They are very fast and very well positioned.”

Coach Bridgeo on Triton: “Triton played an unbelievable game.  Their pressure cover defense befuddled our girls for a while.”

The Vikings entered this afternoon’s game undefeated in their last seven games.  Last loss?  To Masco (3-0) on September 23rd at Masco.  Maggie Sturgis, Cecily Paglierani, and Kate Zamagni were the goal scorers for the Lady Chieftains in that one. 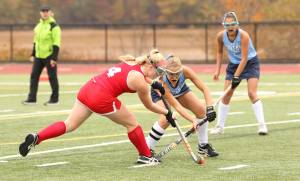 The LC’s two ties have been to North Reading and Central Catholic.  There is a rematch with NR ahead on the schedule.

Masco won the D1 North last year and fell to Somerset in the state semi-finals.  The Lady Chieftains lost only two starters from that 19-2-2 team.

“She was the Cape Ann League Player-of-the-Year last year in basketball and field hockey,” said Coach Bridgeo.  “She’s a great athlete who is usually two plays ahead in everything.  She picked up a lacrosse stick and was good at it without even knowing how to play.” 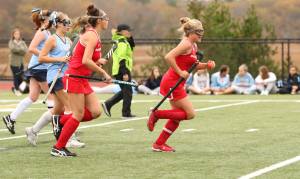 Mak Graves after scoring a goal

It appears that Mak will be attending Northeastern in 2020 to continue playing field hockey.

There was a side feature to Masco’s state semi-final loss in 2018 to Somerset; the opponent had two boys on their team.  “In my opinion,” said Coach Bridgeo, “the title laws were created to make it equal for females.  It is difficult to play against two males.  There’s a big physical difference between 18-year-old boys and 18-year-old girls.  Years ago, when I was in high school, Masco had a boy on their field hockey team, and they played in a co-ed state tournament.  Maybe it’s heading in that direction.”

The stadium at Triton is very nice.  The lights were good too on an overcast afternoon. 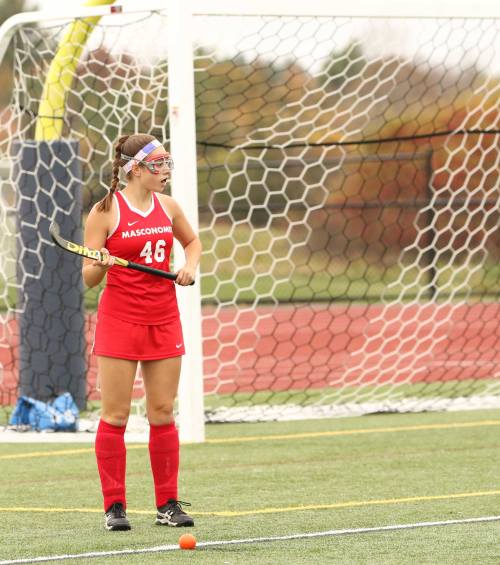 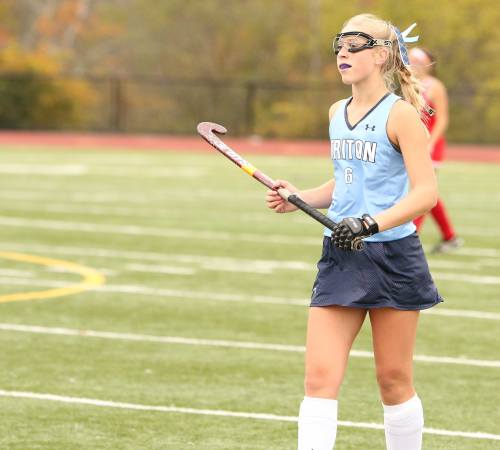 Brianna Hood had a goal for Triton 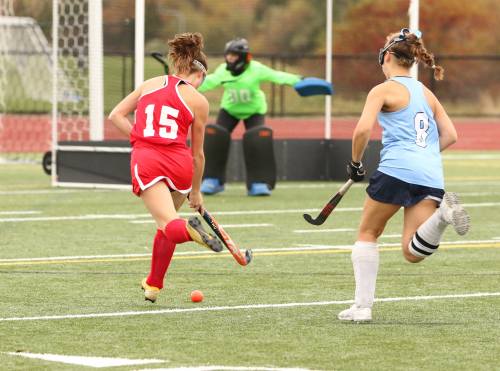 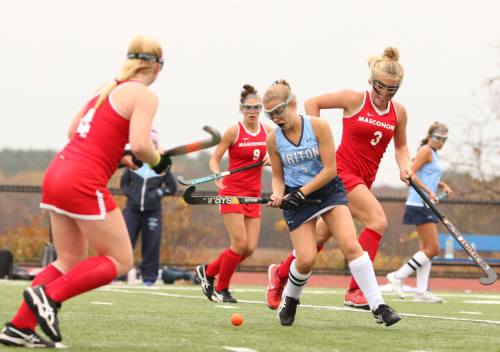 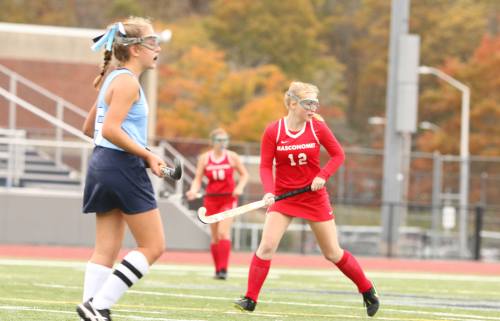 Maddy Peterson breaks in as Masco coaching staff looks on 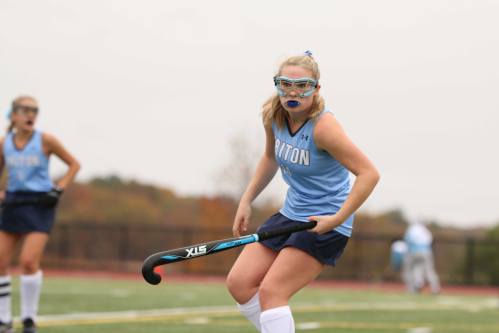 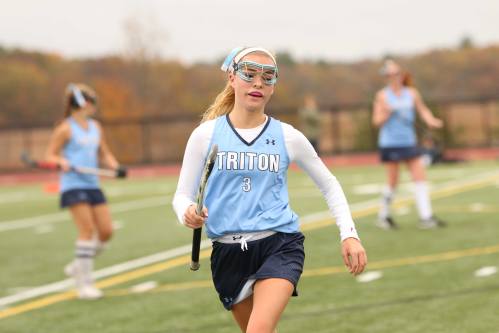 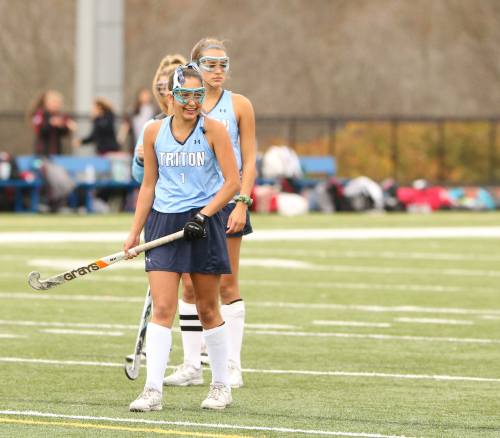 A second goal by Maggie Sturgis (1) 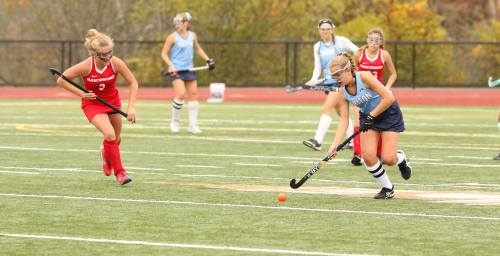