Dan Mason (7) breaks loose late in the first half

(Monroe CT) It was a passing down, but Newtown opted instead for a run up the middle.

The result was a momentum-changing 49-yard touchdown shocker by Dan Mason and Newtown went on to defeat undefeated Masuk, 14-7.

“Cold” doesn’t come close to describing the weather conditions on the Wednesday pre-Thanksgiving event at Benedict Field.  Add an occasional gale-force wind to the low temperatures and you could imagine the discomfort.

Two years ago, Ben Mason the linebacker became Ben ball-carrier having a five-touchdown evening leading the 2015 Nighthawks to a 40-8 rout over Masuk.  Ben’s brother Dan didn’t get five TDs on this evening but he got two and that was enough to earn Newtown a sixth straight win over the Panthers (9-1).

The Nighthawks (7-3) showed in the first half that they were not going to be another team rolled over by Masuk’s high-scoring offense.

The Panthers, on occasion, did look like the teams that had 401 points in nine games, but Newtown limited lengthy drives by pressuring QB Matt Hersch and containing Jack Roberge.

“I’m quite sure that their quarterback hasn’t been sacked that many times in a game this year,” said NHS coach Bob Pattison afterwards.

Nicholas Lorusso (25) gets behind Connor Marlin (13)

Masuk scored their only touchdown in the first quarter.  Nicholas Lorusso ran a nice fade route into the right corner of the end zone and Matt Hersch delivered a perfect nine-yard pass (behind Connor Martin) for the early lead at 3:02.

It was the 12th touchdown catch for Nicholas and the 31st touchdown pass for Matt.

At the time, I thought that this would be the beginning of a parade of points for the undefeated Panthers.

But it wasn’t.  Why?  Newtown got the stunning equalizer before the half and had the ground game to control the clock in the second half.  Add a defense that held a team that had not been behind all season, and had scored at least twenty-points in every game, to one touchdown speaks for itself.

Most important play?  The Dan Mason touchdown at the end of the second quarter. With less than a minute left in the half and forty-nine yards to go it looked like a good time to go to the air.  Newtown opted for a running play instead.

“It was a passing down, but we thought we’d see what we could get with a quick hitter up the middle,” explained Coach Pattison.  What they got was pure gold as Dan Mason followed a key block on the Masuk linebacker and then split the safeties into open territory.

Dan Mason after the NHS upset

“The grass just opened up,” said Dan later.  “I knew that I wasn’t going to let anyone take me down.”

Masuk coach Joe Lato recalled that play: “Our techniques were wrong on the touchdown.  We fixed it at halftime, but we couldn’t take the points off the scoreboard.”

The team from Monroe had a promising second-half start when Robert Martinsky brought an interception back to the Newtown 17.  Enter the high-powered Masuk offense?  Not on this evening.

While the Nighthawks’ turnover wasn’t costly, the Panthers weren’t as fortunate after Jack Roberge fumbled and Joe Pagett recovered at the Masuk 33 with 3:24 left in the 3rd quarter.

Patiently Newtown moved the ball, running the clock, and converting 4th downs along the way.  Dan Mason finished the job behind terrific blocking, rushing two yards into the end zone as the third quarter ended.

An earlier confirmation of it not being Masuk’s day was on Robert Martinsky’s interception.  Looked like a pretty clear path to the end zone for Robert but the gathering Masuk blockers turned into obstacles and one of them forced Robert out at the Newtown seventeen.

Why does this happen?  For such an important game, why would the roster handout be messed up for Newtown?

I was impressed with Masuk’s turf field.  Great surface.  I was at the Yale Bowl for the Harvard/Yale game Saturday on regular grass.  Very slippery and uneven.

“Some of the motivation in the game was from our seniors,” said Nighthawks first-year coach Bobby Pattison. “The papers predicted a big season for Masuk and not much of one for them.  This was a game that we weren’t supposed to win but the seniors made it happen.”

Dan Mason two touchdowns gave him six for the 2017 season.  I don’t doubt that he’ll have a few more next season.

Matt Hersch at the end of a 4th quarter trick play

Coach Joe Lato went the trick play route late in the game as QB Matt Hersch handed off to Ryan Shaw and then went downfield for a pass.  The wind got into Ryan’s pass, however, and Matt’s catch was way out-of-bounds.

Good luck to Masuk in the playoffs.  Tonight’s loss should toughen them up for the do-or-die games ahead.

(All of the pictures above and below will enlarge considerably BUT you have to click on them to make it happen.) 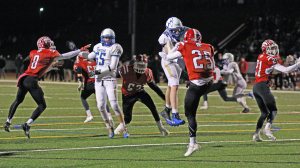 Ryan Williams (62) goes for the block 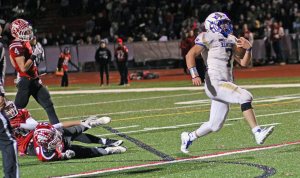 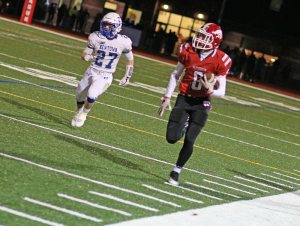 Robert Martinsky runs back an interception chased by Jack Miller

Shea Talbot (32) breaks up a pass intended for Ryan Shaw 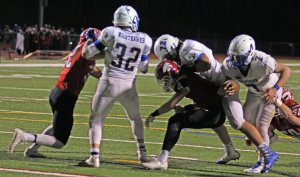 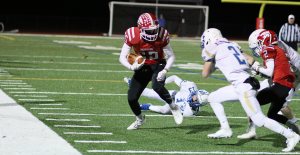 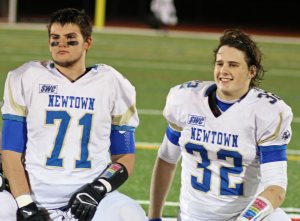 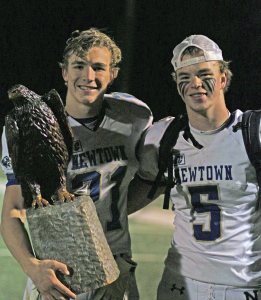