Hat tricks by Charlotte Esty and Hannah Lejeune powered the Highlanders to their 13th straight victory and a matchup with Lexington Christian Academy at home on Saturday.

Today’s rout is a game Marianapolis will want to forget as quickly as possible. The highlight of Knights’ season was this past Saturday when they edged rival Wheeler, 1-0, to win the SENE tournament at home in Thompson, Connecticut in front of a large crowd .

In this one the Highlanders had only two goals after thirty minutes of the first half but added a killer goal in the final thirty seconds to take a more formidable, 3-0, halftime lead.

Taylor Landers drives home a rebound late in the first half

On that decisive third goal, with time running out, Pingree launched a long shot at Marianapolis goalie Jordan Desaulnier.  Jordan was unable to hold onto the ball and hustling Taylor Landers drove the rebound into the net.

Pingree returned from halftime and added three more goals in the first twenty minutes of the second half in a dominating performance.  The rest of the way was hugs and happy faces for the home team.

The Highlanders (15-1-1) played Lexington Christian Academy during the regular season but this time it will be the Class C semi-finals on Saturday at home.  The Highlanders defeated LCA, 3-1, in September.  Junior Charlotte Esty had the hat trick for Pingree in that one.

The Knights did get a goal five minutes into the second half after a scramble in front of the Pingree net resulted in the ball getting behind Highlanders GK Nicole Khachadourian.  Freshman Sage Auger was credited with the score.

Nicole Scarfo moves in for a great chance

A key to the Pingree win was containing junior Caroline Soucy.  Caroline, formerly of nearby Ipswich, had a record-setting (40 goals) season but on this day could never get the ball with time and space.  That time-and-space thing was not a problem for Pingree.  The combination of speed, dribbling ability, and unselfish teammates created openings for various Highlanders all afternoon.

Kerri Zerfoss (going to Northeastern) was trouble for Marianapolis every time she controlled the ball.  I saw her score one goal (Pingree’s first) but someone with better eyes than mine said she had a second as well.

The #2 seed Highlanders are the defending Class C champions.  They will need to win two more games to get there again.

loose ball in the box

Marianapolis (18-4-1) brought several busloads of students and they were quickly into the, “I believe that we will win,” chant.

Both teams were undefeated in their leagues this season.

The bottom-line difference between the two teams was Pingree’s ability to maneuver into high percentage scoring opportunities.  On the other hand, the Highlanders’ defense allowed little.

Freshman Hannah Lejeune converted a header in a crowd on an assist by Charlotte Esty.  Charlotte recorded her 100th point during this game.

(This is a blog so corrections are easily made.  Let me know.) 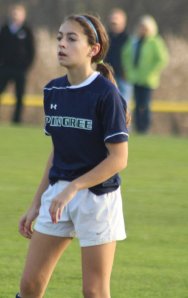 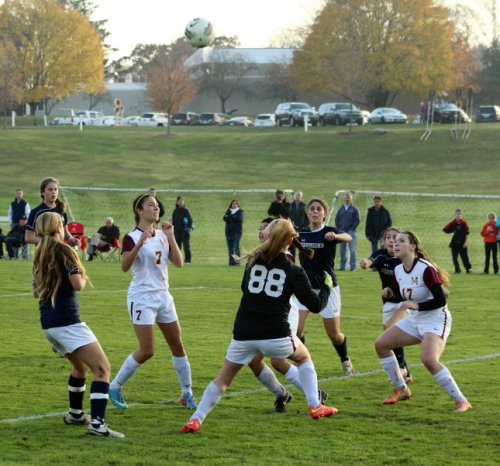 June Kiely was part of a solid Pingree defense 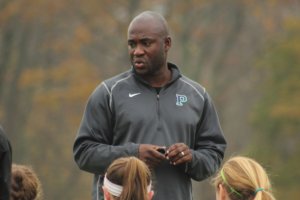