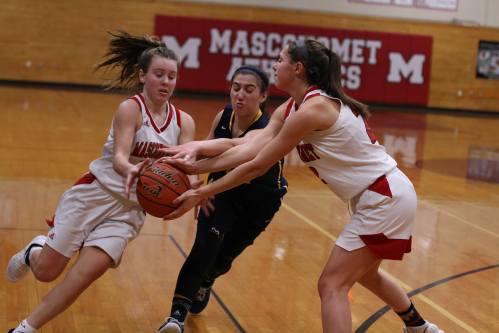 Plenty of tough defense on display 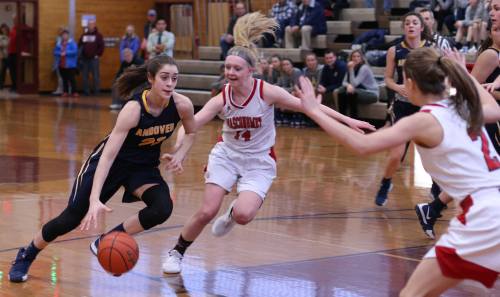 (Boxford MA) Andover’s Gia Bramanti came alive in the final four minutes and led the Warriors to a, 45-41, win over Masco on Sunday afternoon.

Who could argue?  The 6-1 senior shouldered the scoring load for AHS after Tatum Shaw’s 3-pointer put the Warriors close, 35-34, with 3:48 left in the non-league contest.

In the next 2+ minutes, Gia put five points on either side of a Morgan Bovardi triple and the visitors pushed ahead, 44-38, with 1:39 remaining.  Masco had enough possessions thereafter to catch up, but the Andover defense wouldn’t allow it. 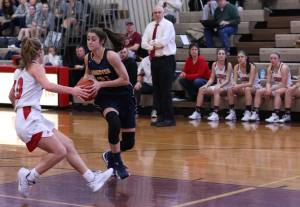 Gia Bramanti in the lane

“Gia made the big plays when she had to,” said Warriors’ coach Alan Hibino.  “She wasn’t surprised by the moment.  She wants the ball in those situations.”

The defense for both sides was tenacious.  Open shots vanished after warmups.  “Our kids played hard on defense,” said Coach Romeo.  “There was nothing easy for either team.  Andover is used to it every night in the Merrimack Valley Conference.  We don’t see it as often in the Cape Ann League.”

Gia Bramanti turned out to be the shooting star at the end but for almost three quarters the Masco defensive combo of Marissa DeLucia and Cally McSweeney limited her to six points.  But then in the final seconds of the 3rd quarter, Gia drained her first three as the quarter ended tied at 29-29. 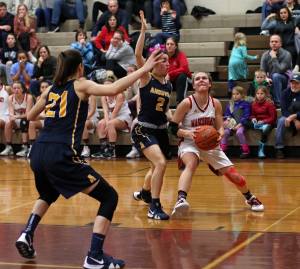 This game had six ties and six lead changes.

A key to the Warriors’ win?  The defensive job junior Shea Krekorian did on Masco’s top scorer, Mak Graves.  Mak averages fourteen points per game and had two 3’s in the first quarter and a layup in the first two minutes of the second quarter.  After that?  Nothing.

“We’ve seen them (Masco) play a couple of times,” said AHS coach Alan Hibino.  “Mak is the engine that makes them go.  Shea Krekorian did a nice job on her.”

The Warriors showed a zone defense in the last quarter.  Normally Masco’s shooters make that into a bad idea.  “Our shooters can make outside shots but Mak and Morgan need space and their defenders had length,” said Coach Romeo.

“I have no regrets on our level of effort,” added Coach Romeo.  “Andover averages close to 70 points per game.  Our kids played so hard on defense.”

Coach Hibino expected a tough game. “Coach Romeo reached out to us this summer to play this game.  It’s nice to go out of conference and play an opponent of Masco’s caliber.  Mak and Morgan are fantastic players.”

Gia Bramanti: “It was hard work out there.  Masco is very good.  Their two guards are definitely going to play in college if they want to.” 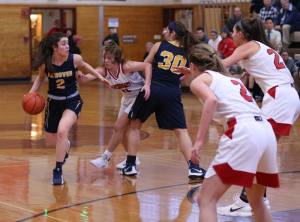 Andover’s thirteen wins give them more wins than any other team in Division 1 North.  Masco, also in D1, has already qualified for the post-season.  Plenty of D1 coaches in the crowd getting a look at two possible tournament opponents.

I asked Gia about her plans for next year: “I am looking to do a post-graduate year.  I haven’t really decided where yet.”

Regarding her late-game heroics Gia said, “It always feels great when I can connect.  It was when it really mattered.  The adrenalin kicked in and I knew that I had to make a few shots.”

Paige Richardson and Mak Graves each had eight for Masconomet. 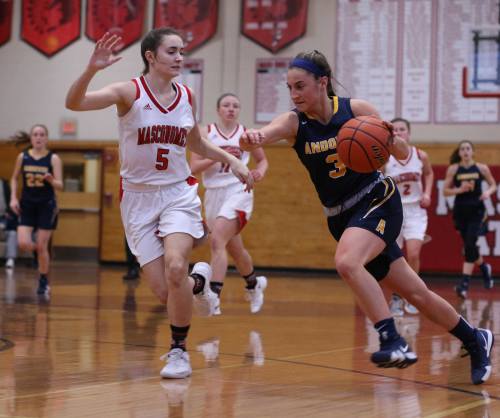 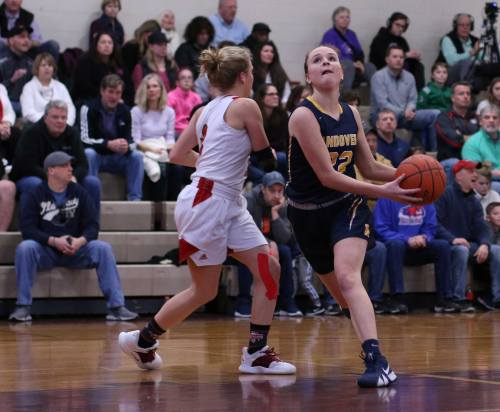 Saran Sullivan (22) gets into the lane 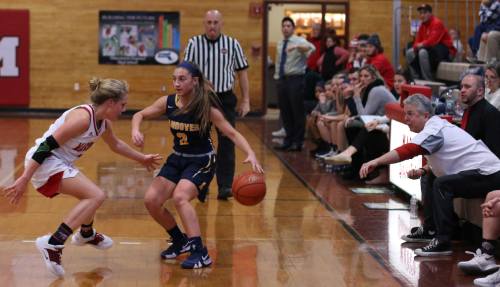