Central Catholic controlled the inside. Here Aaron Hall (19 points) puts back a rebound

The Raiders (20-5) will now play Andover in the D1 North finals on Saturday at the Tsongas Center.

Ten lead changes in the first quarter gives you a sense of what kind of game St. John’s/Central Catholic was early on.  The pace was fast and the shots were falling for both teams.

The Eagles went on to dominate most of the second and third quarter (up 59-50 in the 3rd) before the Raiders came all the way back and took the lead on an Alex Santos layup in the last minute of regulation.

On the Eagles possession, Mike Bisson was able to make one of two free throws to tie the score (67-67) with forty-five seconds left. 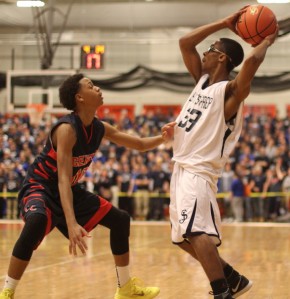 The Raiders then had a turnover (steal by Max Butterbrodt) setting up St. John’s with plenty of time to get the point or points needed for the win.  But a terrific defensive job my sophomore AJ Pettway on junior Kareem Davis (11 points) extended the game into overtime.

AJ Pettway, who was shutout for four quarters, scored four points in overtime giving CC the lead for good (73-71) with a rebound conversion.

Junior Ben Judson (30 points) carried the Eagles for three quarters collecting twenty-four points.  Five of the baskets came from long range. Thereafter, the lefty cooled off and each miss seemed to add to his frustration.  That frustration turned costly as Ben was assessed a technical foul with a minute left in overtime after missing a shot.  Tyler Nelson drained the resulting free throws putting Central Catholic ahead, 75-71.  The Eagles never recovered as CC added four more free throws. 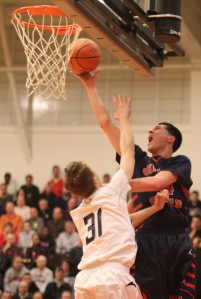 St. John’s spent most of the night taking and making difficult shots.  The Raiders had size inside (Nick Cambio & Aaron Hall) and normal layups for the Eagles were infrequent.

On the other hand, Central Catholic shot plenty of high percentage shots.  The Eagles had no answers for 6-6 Nick Cambio (19 points) when he got the ball down low.  Aaron Hall (19 points) stayed close to the basket and when Tyler Nelson (19 points) required an extra defender it was usually Aaron’s defender.  Tyler had six assists (by my count) and most of them were to Aaron for layups.

The Beverly Fieldhouse filled early because if there is a rivalry that will deliver excitement it is this one.

Also on hand were two of the best student sections you’ll ever see.  There was plenty of back-and-forth chanting and cheering as the game unfolded.

Alex Santos had ten points for Central Catholic.  The Raiders set up Alex (6-foot) in the lane on an inbounds play. 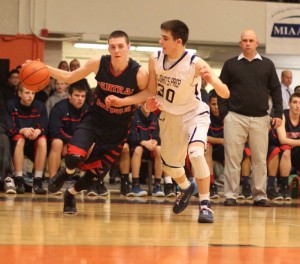 Alex Santos puts in a rebound 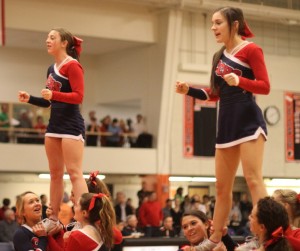 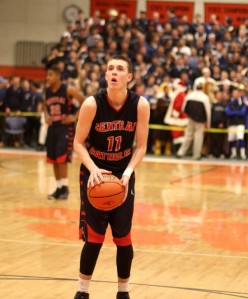 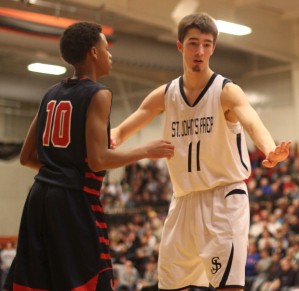 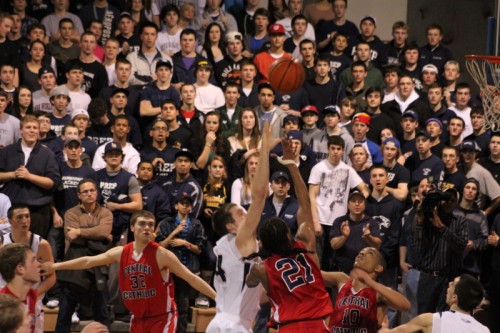 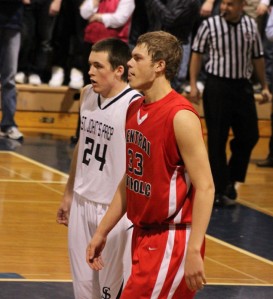 (Danvers) This was the game you circled on your calendar when you got the 2010-11 schedule for either St. John’s Prep or Central Catholic.

Central Catholic at St. John’s Prep.  Plenty would argue that they’re the two best teams in the state.  And what a show they put on at St. John‘s in front of at least 1000 fans, some sitting and many standing, on Wednesday night.

No surprise that Pat Connaughton would have a big part late in the Eagles winning 72-70.  He made a tough shot over Luis Puello with twenty seconds left to give St. John’s the two-point edge and then topped that by blocking Jimmy Zenevitch’s tying layup attempt from behind down the other end.

The Raiders had one last try for a tie/win with 3.8 seconds to go but Freddy Shove intercepted the inbounds pass after a deflection by Isaiah Robinson to seal the victory.

Central Catholic (19-2) had a fifteen game winning streak snapped while St. John’s (19-1) extends their win streak to eight.  I also learned that the Raiders had an eleven-game winning streak versus the Eagles ended by tonight’s outcome.

The Eagles finished the regular season 13-0 at home where the support is organized, loud, and never-ending.

The possibility that these teams could get a rematch in the Division 1 North finals would appear likely.  Both will make it difficult for opponents between now and a rematch to run an organized offense.  Each has several big-time, go-to shooters.

There were eight lead changes in the first quarter before the Eagles ran off thirteen straight going into the start of the second quarter to pull away (24-12) and hint that a blowout might be in the making. Pat Connaughton converted a rebound, hit a jump shot, and then nailed a long one in this segment.

Jimmy Zenevitch connects on a three.

Over the next 3:45 the Raiders started the road back using a 10-2 spurt including a couple of Jimmy Zenevitch baskets to close to 26-22 with four minutes left.  The Prep led at the half, 36-31.

CC finally caught the Eagles (41-40) on a Jimmy Zenevitch jumper 3 ½ minutes into the third quarter.  There would be nine more lead changes before this game ended.

The third quarter finished with the teams tied at 55-55.  It wasn’t hard to suspect at this point that there was an exciting conclusion in the works.

Five minutes of playing time later you weren’t so sure.  After Central Catholic had gone up by three (60-57) on Jimmy Zenevitch’s three and a layup, the Prep rattled off ten straight points to take command (67-60) with just three minutes left.

Three of the points in that 10-point run were from Pat Connaughton connecting from NBA range.  In practice, NBA range was not out of his range.

Despite a very hostile environment, CC surrounded a missed Eagle shot with layups by Jimmy and Luis Puello.  Those clutch scores made it a one-possession game (69-66) with 1:21 to go.

Lack of a goaltending call on Jimmy Zenevitch led to a techical foul against St. John’s.

The most controversial play of the game followed and the way the Eagles reacted to it almost cost them the game.  An Eagle player (It looks like Freddy Shove in my picture to the left.) went in for a layup and Jimmy Zenevitch either deflected the shot or goal tended.  There wasn’t a soul in the house with Eagle connections that wasn’t sure that the basket should have counted because of a goal tend.  When it wasn’t called the St. John’s coaching staff erupted and Eagle coach Sean Connolly got whistled for a technical foul after brushing an official. (Never a good idea down the stretch in a tight game.)

Freshman Tyler Nelson made both technical foul shots.  CC got to keep the ball as well and Jimmy Zenevitch drove for a layup and to the dismay of the home crowd, Central Catholic was shockingly in front, 70-69, with 1:10 left. 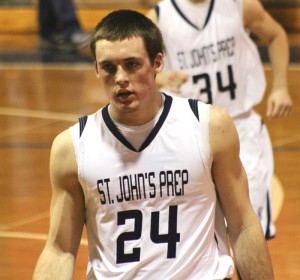 Pat Connaughton – difference maker at both ends in crunch time

Naturally the Eagles had the ball in Pat Connaughton’s hands in the next possession and he got fouled and made one of two free throws with 1:03 left to tie the score.

Jimmy missed an attempt to break the (70-70) tie and that set the stage for Pat to score the winner and block Jimmy’s tying attempt.

Jimmy Zenevitch (32 points) used his height (6-7) to get inside points.  The lefty also made a three in the final quarter.  The talented senior reached 1000 points in the third quarter. However, in a game this tight the Assumption recruit may well look back at his 3-for-10 from the foul line with some dismay.

Pat Connaughton (23 points) was guarded by at least five different players in denial man-to-man mode.  Down the stretch you knew that the Notre Dame recruit would be getting the shots, as did CC, but they couldn’t keep the ball away from him.  His game-saving block late was just a great athletic move. 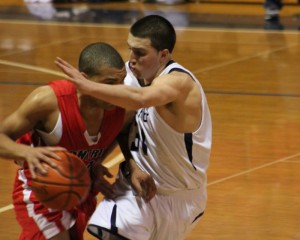 Mike Carbone (21 points) has the quick release to offset his lack of size.  He hit four 3’s and didn’t miss a free throw.  He also did a super defensive job on Jaycob Morales (5 points).

Luis Puello (12 points) is a favorite of mine.  His quickness is eye-catching and his defense is as well.  He can get to the basket anytime he chooses.

The crowd was awesome.  I checked out the St. John’s website and knew that the doors opened 1 ½ hours before the game started and that a sell-out was likely.  I got there shortly after 5:30 (the game started at 7) and there were few seats left.  Many of those who arrived in the next half hour ended up standing.  After that, the sellout the website referred to happened.

The pairings for the state tournament will be announced on Friday (February 25th) and the do-or-die games start on Tuesday. 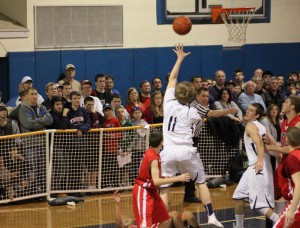 Note the late-arriving crowd under the basket.

Wouldn’t Central Catholic like another chance against The Prep on a neutral site for the Division 1 North title.  I expect to be there if that game happens.

(I collect my own stats, take my own pictures, write my own captions, and draw my own conclusions.  Mistakes are unintentional.)

(Lawrence)  Central Catholic blitzed Bishop Hendricken at the start of each half and cruised to a 69-44 victory on Sunday afternoon.

The Raiders last loss was February 8, 2010 against these Hawks.  Maybe that had something to do with the very noticeable defensive intensity the home team displayed.

CC (14-1) had a tough win over Lowell (66-60) on Friday night but had more than enough weapons and energy to handle the visitors from Warwick, Rhode Island.  They’ve now won ten straight.

The Hawks (9-6) have been state champs in Rhode Island for six straight seasons.  From what I saw today, getting the seventh straight will be a struggle.

The Raiders ran perpetual defense at BH and dominated the boards completely.

Jimmy Zenevitch (21 points) led all scorers and had an easy time of it with limited minutes getting seventeen of those points in the first half.

BH was in trouble quickly in this one.  In the first three minutes the Raider defense forced four turnovers and turned up high percentage opportunities down the other end.  Luis Puello, Evan Sheehan, Jaycob Morales, and Jimmy Zenevich were scoring parts to a fast, 13-2, breakout.

BH trailed 18-6 after a quarter still struggling to get any sort of high percentage shot off.  However, they did find some long-range accuracy in the second quarter with two 3’s from Lee Messier and another one from Rory Temkin.  The long-distance offense narrowed the Hawk deficit to 23-15 three minutes into the second quarter.

Teams live and die long-range.  While BH missed their next three 3’s, Catholic Central ran eight straight on three’s by Tyler Nelson and Evan Sheehan and a Jimmy layup.  Back the lead went to 31-15.  CC led 36-20 at halftime.

The Raiders went off on another both-ends blitz in the second half.  In the first 2:45 the home team, led by Luis Puello’s seven points, dumped eleven straight on BH.  That surge put BH down 47-20 and out.

BH outscored CC, 24-20, the rest of the way as both teams gave reserves playing time.

Luis Puello (13 points) had eleven in the second half. 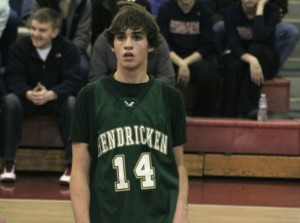 I came away very impressed with the defense of Central Catholic.  They just wouldn’t allow any straight paths toward the basket.  They were all over dribblers and pass receivers.  They forced twenty-nine turnovers.

BH used zones with an eye on Jimmy.  When he moved to the corner there were all sorts of opportunities for teammates in close.

The rebounding was impressive.  By the time CC had the 47-20 lead early in the second half, the Hawks had gotten only one second shot!  That’s covering the boards.

I was impressed with the routines of the CC cheerleaders.  They were excellent gymnasts.  Their tosses were spectacular in my non-schooled opinion.

Jimmy Zenevitch will play for Division 2 Assumption next season.

I visited CC last year when they hosted Lawrence.  Much thinner crowd this time.  Some folks probably knew that the Celtic/Laker game had the same start time today as the game with Bishop Hendricken.  Where’s the school loyalty?

(I collect my own stats, take my own pictures, and draw my own conclusions.  Mistakes are unintentional.)