Amy Sullivan tries for third as Kelsey Trudel prepares to throw her out.

Cori Simons struck out four and had two hits.

(Newburyport) Triton combined flawless fielding with a Cori Simons six-hitter and started the Cape Ann League regular season with a 6-3 win over Newburyport on Wednesday afternoon at Cashman Park.

The senior-less Vikings (2-5) tallied three runs in the first and never trailed.  The Clippers (3-4) got within a run in the fourth but a collection of loud outs with runners in scoring position, and base running gaffes, kept them from getting closer.

Newburyport ended three innings with loud outs to the outfield with runners aboard.  They also ran into a double play in the seventh on a rope to shortstop Shannon Sinton.

Triton had nine hits off of Molly Rowe including four in the first and another three in the fifth.  Bunching those hits produced five Viking runs.

In the Triton first, Shannon Sinton and Jeanne Martin had singles off second baseman Amy Sullivan’s glove.  An inch or two either way and they would have been outs but on this day Shannon eventually scored (passed ball) and Jeanne drove in Kelsey Trudel with the third Viking run. 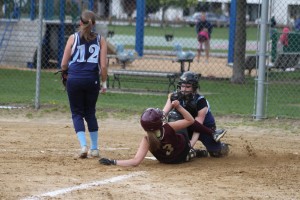 Lea Tomasz slides under the tag of Rose Gaffins.

Newburyport got two back in their half of the fourth.  Lea Tomasz delivered Carley Siemasko with a long double to left.  Lea took third on the throw to the plate and came home on a passed ball.

Triton came right back with two in the fifth.  A perfectly executed sacrifice bunt by Shannon Sinton put Mara Spears in scoring position.  Cori Simons’ single to right brought Mara in with Run #4.  Cori then stole second, reached 3rd on a fielder’s choice and came in on a controversial (was it fair?) flair near the right field line.

Down by four in their last at-bats, the Clippers had the makings of a big rally after a double (Molly Rowe) and a single (Beth Castantini) turned up a run with no outs.  But Sam Wahlgren’s line drive was right at shortstop Shannon Sinton and she turned it into a double play.  Cori Simons finished the game recording her fourth strikeout.

Aggressive base running was good news/bad news for Amy Sullivan.  The sophomore second baseman stole second in the six inning but got caught easily trying to take third on the overthrow.

Newburyport has played six of its first seven games at home.  They will play at Manchester-Essex on Friday.

Triton will face Rockport at home on Friday.

Had the weather trifecta at Cashman – cloudy, rainy, and sunny. 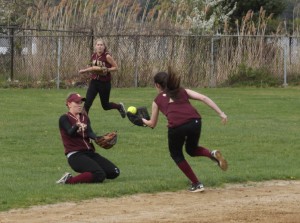 Amy Sullivan and Kendra Dow had nice catches on popups.

Cori Simons, Lily Anderson, and Kelsey Trudel each had two hits for Triton.  Beth Castantini had two for Newburyport.

On the controversial (Is it fair?) fly to right in the Triton sixth inning, the home plate umpire had to make the call.  The problem was that he was looking over/around several players to do it.  Where was the other ump?  Because there were runners on base, he wasn’t on the first base line.

(The pictures above and below enlarge if you click on them.)