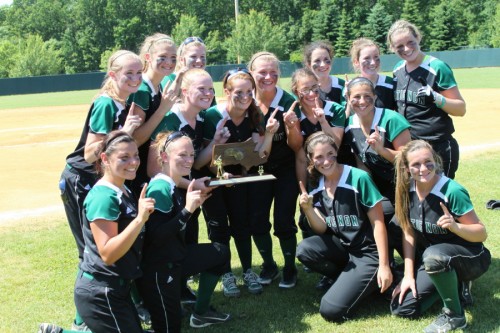 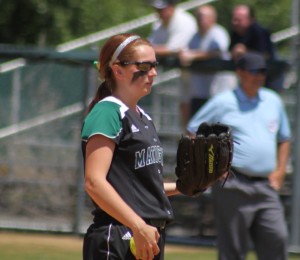 (Lowell) Matignon defeated St. Mary’s 3-1 as familiar foes from the Catholic Central Large went at it in the Division 3 North softball finals on sunny Sunday afternoon at Martin Field.

The win gets the Warriors (17-8) into the state semi-finals against Case High School from Swansea.

The Spartans (#4 seed) usually feature pitcher Brooke L’Abbe and plenty of hitting.  Unfortunately versus Matignon, Brooke did her part (ten strikeouts) but the hitting (four hits) was scattered at best.

Matignon pitcher Lauren Doneski never struck anyone out but was hardly ever hit hard.  The Warrior senior allowed just two hits over the final five innings and St. Mary’s left only one runner on base during those five innings.

Both teams had “fall-apart” innings.  For Matignon (#16 seed) it was in the second.  For St. Mary’s it was in the third.  Both teams were able to limit the bleeding but Matignon came away with enough runs to win the game. 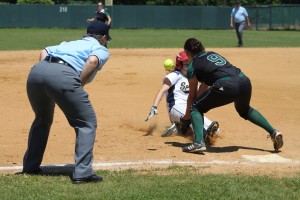 In the St. Mary’s second, with courtesy runner Nina Murray on second, Warrior second baseman Julia Graf dropped Tatiana Doucette’s popup.  After the drop, Julia tried to get Nina trying for third and her throw went past Matignon third baseman Jocelyn Tagher allowing Nina to score with one out.  The Spartans would eventually have runners on second (Molly Doyle) and third (Tatiana Doucette) with two outs before Lauren Doneski got Alison Butler to pop out to shortstop to end the inning.

Ahead 1-0 after two innings, it was St. Mary’s turn to allow an extra out and suffer the consequences.  After a Julia Graf walk, right fielder Abbe Caggiano dropped a long fly by Sarah Gauthier setting up Matignon with runners on first and third with one out.  Kayla McKinnon bunted to third but on the throw to first Julia Graf darted home with Matignon’s first run.  Equally important was that during the throw to first and then home, Sarah Gauthier reached third with two outs.  Lauren Doneski’s single to short left delivered Sarah with the Warrior’s important second run.

So after innings in which each team’s defense was a bit shaky, Matignon came out ahead, 2-1, after 2 ½ innings. 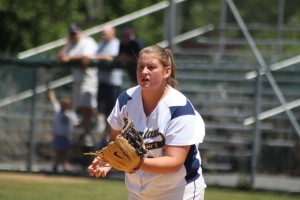 The Warriors grabbed some breathing room in the sixth.  Lauren Doneski walked (Brooke L’Abbe’s only walk of the game) and was sacrificed to second by Diana Golini with two outs.  Junior Ryen Cahill then ripped a double down the left field line getting Lauren home.

Brooke had a single with one out in the bottom of the sixth but that was all the Warriors allowed the rest of the way.

Matignon of Cambridge and St. Mary’s of Lynn met twice during the regular season with each team winning once.

Isabella Palange catches the final out