Kristi is all smiles afterwards

(Both teams are the Panthers so I will avoid the nickname.)

Franklin (21-0-1) will now face Nashoba Valley (18-0-4) on Friday night at Worcester State University at 5PM.  NV has only lost once in two years.  What a great matchup!

Franklin senior Kristi Kirshe got the, “will she get her 100th goal,” suspense behind her in the first half on a direct kick.

In the second half, sophomore Taylor Cogliano broke past Beverly goalie Rachel Kenney for a Franklin insurance goal.

The South champs had the better of the midfield play most of the game.  I could hear Beverly coach Kristin Simpson yelling to her team that Franklin, “was winning all of the 50/50 balls.”  Kristi Kirshe had plenty to do with that domination.

Franklin GK Dani Lonati deflects a corner kick over the net as Caitlin Harty (6) lurks nearby.

Beverly (18-4-0) had several good chances by their 50-goal scorer Caitlin Harty but for the most part Caitlin had trouble getting any operating room.  Julia Bireley shadowed Caitlin throughout the game.

Much of the Beverly offense was setup by the individual skills of sophomore Eva Gourdeau.

Franklin (21-0-1) was able to get deep on Beverly numerous times off of the dribbling and passing of Kristi Kirshe and Taylor Cogliano.

Kristi hit the crossbar near the end of the first half while Taylor had shots go wide on either side of the Beverly net in the second half.

Kristi’s milestone goal was off a direct kick at 33:54 in the first half.  Kristi’s dribbling set up the direct kick as she was dropped by Beverly’s Kristen O’Connor.

Kristi faced a wall of Beverly defenders but her hard shot hit the left goalpost and caromed to the right into the net behind Beverly GK Casey Cook.

Eighteen minutes after Kristi’s goal in the first half, Beverly had two back-to-back corner kicks from both sides.  Caitlin Harty came close to getting a head on the first while Eva Gourdeau did get a head on the second.  Neither resulted in a goal but Franklin coach Tom Geysen called a timeout right after that to settle things down.

I happened to catch some of Coach Geysen’s halftime talk and believe me he wasn’t handing out accolades.  The memory of a 3-0 halftime lead against Oliver Ames in the South finals, turning into a 3-2 nail biter, was probably still fresh in his mind.

About ten minutes into the second half the Beverly coach moved Kristen O’Connor further up the field to be part of the attack hoping that a tying goal would result.  Kristen was already taking all the Beverly corner kicks and direct kicks.

That player switch led to a goal at 11:33 after Taylor Cogliano broke open down the middle.  The tricky sophomore had time to fake past the Beverly goalie, dribble a couple more times, and then casually tap the ball into an open net.

Franklin has never won a girls soccer state title.  They reached the state semifinals in 2010 losing to Central Catholic in overtime.

That Beverly reached the state semifinals was a surprise to many.  During the regular season the Panthers lost twice to Peabody and once to Danvers. 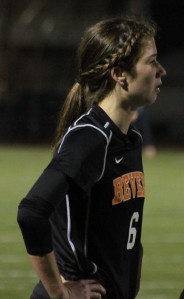 Caitlin is the top student in Beverly’s junior class with a GPA of 4.7348.  She is taking all honors classes.

Nice late fall night at Manning Field.  It was cold but there wasn’t any wind.

Taylor Cogliano sails in for a shot

Kristen OConnor lines up a shot

Grace Conley (23) guards the post during a corner kick.