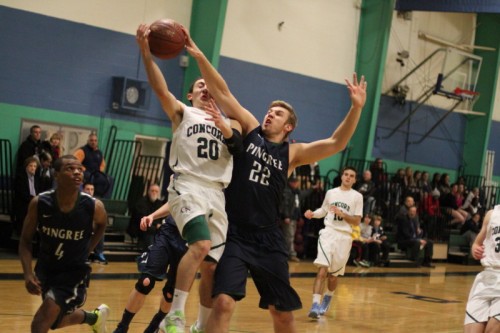 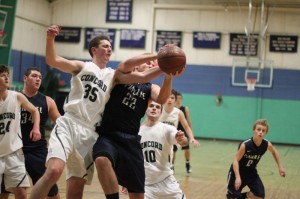 (Hamilton) Pingree School gained twenty-point separation from Concord Academy early in the second half and cruised to a 62-47 win on Friday night in Eastern Independent League boys basketball action.

Pingree (10-3) combined a turnover-producing defense with segment of 6 ½ minutes of nearly unanswered offense to get the job done.

The visitors found themselves in double teams almost anywhere they had the ball. Steals and bad passes were frequent as CA registered, by my count, twenty turnovers in the first half and ten more in the second half.

If CA could have subtracted a certain 6 ½ minutes of this game, they would have been in a tight game (like last year) but unfortunately for Concord they couldn’t and had to live with the effects of a 19-2 Pingree run.

CA (6-3) made enough shots in the first thirteen minutes (Malin Segal has ten points including two 3’s) to trail by a very manageable two points, 23-21. 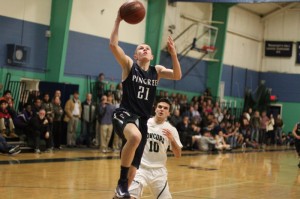 Griffin Beal gets in clean for two

What Pingree did to Concord over the last three minutes of the first half, and the first 3 ½ minutes of the second half, will not appear on any season-highlights video on the campus of Concord Academy.

Let’s take care of the final three minutes of the first half first.  The Highlanders scored the last ten points of the first half despite missing five free throws.  CA registered seven of their twenty first-half turnovers during this segment.  CA also missed the front end of two one-and-one free throw attempts.

Kyle Lentini (17 points) hit a jump shot, stole a CA pass, and made a layup in the final twenty seconds.

Concord had the first points of the second half (Sam Stogdon layup) but then were victimized by another scoring drought.  The next three minutes of playing time saw only Pingree points go up…….nine of them.  At the end of it, what had been a competitive game earlier (23-21), became out of hand (42-23). 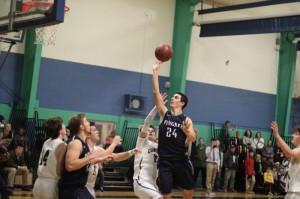 During the early second-half run of Pingree offense, Justin Assad (13 points) had a three and a layup, while Kyle Lentini converted a rebound, and Alonzo Jackson made two free throws.

Concord did score more points than Pingree the rest of the way but as they say in farm country, “The cows had left the barn.”

Malin Segal (21 points) and Sam Stogdon (14 points) reached double figures for CA.  Many of their points came against the Pingree reserves in the second half.

CA employed a 1-3-1 half court zone.  Pingree’s willingness to make extra passes turned up juicy shots for teammates closer to the basket.  The Highlanders made just one three (Justin Assad) but didn’t need the long ball in this game. 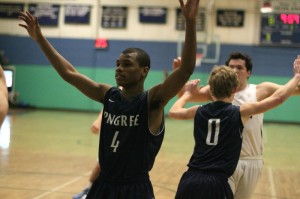 The constant Pingree pressure forced CA to play a lot faster than I suspect they were comfortable with.  Good defense is a team thing but Johnny Spears stands out in the Highlander defense.  He is as capable of stealing the ball, even from good dribblers, as anyone I’ve seen this season.

The two teams meet again on February 1st at Concord Academy.  If CA can upgrade their ball management that meeting could well produce a closer game than today’s was.

Those of us who like to chase the good matchups might want to get January 30th circled now.  That’s when Beaver Country Day School visits Hamilton.  Both teams are currently undefeated in EIL play.  I saw Beaver defeat Pingree, 54-36, last February at Pingree.

(All of the pictures above and below enlarge considerably and get in better focus if you click on them.)

Jack Anderson goes for the block