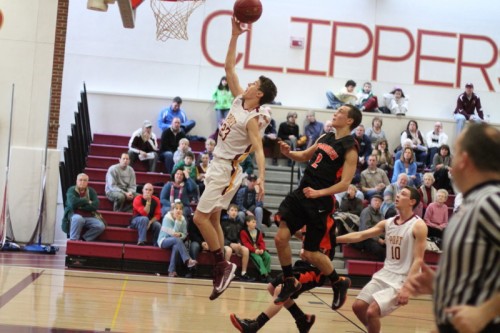 (Newburyport) The Newburyport withstood a late Ipswich rally and defeated the Tigers, 50-39, on Monday afternoon in a nonleague game.

The Clippers lead, which had been as high as fifteen points (37-22), was only six (41-35) with four minutes left in the fourth quarter.

At that point, the home team answered with a game-deciding seven straight points on layups by Colton Fontaine (14 points) and a 3-pointer by Colby Morris (15 points).  A tenuous six-point lead quickly became a much more comfortable thirteen-point lead with two minutes left.

Newburyport (8-3) needs two more wins in their six remaining games to qualify for the MIAA tournament.  The Clippers will be at Georgetown on Friday night.

Newburyport stung Ipswich (2-10) with six 3-pointers.  Colby Morris had four of them including three in the first 5 ½ minutes of the game. 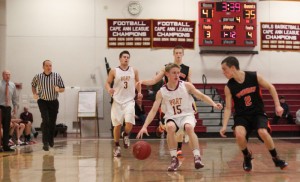 While Colby had nine first-period points, Ipswich’s Matt Jaeger also had a three as well as two jumpers.  The Tigers trailed only 15-13 after a quarter.

If Ipswich coach Alan Laroche could erase one of the four quarters in this game it would surely be the second quarter.  Why?  The Tigers tallied just five points, had seven turnovers, watched Newburyport score eleven straight, and trailed by ten (28-18) when that quarter was over.

Sophomore Mike Shay came off the bench to be the finisher twice in that quarter after Ipswich miscues.  In the eleven-straight segment Ian Michaels (8 points) nailed a three and Colton Fontaine added a layup and a free throw.

The Clippers had another run of unanswered offense (eight straight) in the third period.  A second Ian Michaels three combined with a layup, a converted rebound, and a free throw, all by Colton Fontaine, did the damage for Newburyport.  This surge gave the Clippers a commanding 37-22 advantage with three minutes left in the third quarter. 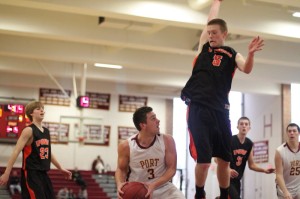 Ipswich was down but not entirely out as Erik Fyrer (11 points) led the Tigers back into a challenging position during the next six minutes of playing time.  The 6-4 junior, despite heavy coverage by Colton Fontaine, posted eight points during the Ipswich rally and helped cut the Newburyport margin down to 41-35.

However, Newburyport was able to regain control and come away with their eighth victory of the season.

Ipswich will host Hamilton-Wenham on Friday.

A team with multiple 3-point shooters will always be difficult to defend.  With Colby Morris back, after missing five games, the Clippers can hurt opponents long range with Colby and Ian Michaels.

Colby Morris didn’t play in the regular season game with Ipswich that the Clippers won, 38-26.  That was the game in which the halftime score was an uninspiring, 13-7.

Erik Fyrer ended up with eight rebounds and four blocks according to my statistician.

(All of the pictures above and below will enlarge considerably and get into better focus if you click on them.)

Erik Fyrer goes for the block against Ian Michaels