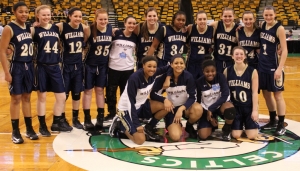 (Boston) The Boston Globe had Archbishop Williams as the second-best team in the state behind Reading before today’s state semi-finals.

The #7 seed Archies (22-5) looked awfully good in their, 52-38, Division Three state semi-finals win over Pentucket at the TD Garden on Monday afternoon.

When I learned that Reading had been beaten by Medfield later today in the Division 2 semifinals, I think that it is safe to say that Archbishop Williams is now the best in the East in all divisions.

Lee will be the Archies’ opponent on Saturday at the Worcester Centrum (10:45AM) for the state Division Three title.  Just to caution the overconfident in the East: the Lee girls basketball program has won more state titles than any school in Massachusetts.

The Bishops were able to gain separation (18-9) from the Sachems with a ten-point run in the last three minutes of the first quarter.  A new three (Kayla Free), a converted rebound (Alana Gilmer), an old-fashioned three (Leah Spencer), and a layup at the buzzer (Jaylen Williams) provided the decisive 10-spot.

The Sachems (24-2) chased the Archies the rest of the afternoon. The undersized girls from West Newbury were within four (20-16) in the second quarter and five (28-23) in the third quarter.

The Sachems had their best moments in the final quarter when their pressing defense forced two turnovers and four quick points (two Kelsi McNamara free throws and Tess Nogueira layup from Kelsi).  Pentucket was suddenly within six (40-34) with six minutes left.

Those who have seen Pentucket play, envisioned the start of a big run and an interesting finish.  Didn’t happen.  Sara Ryan answered with a three.  Kelsi followed with two free throws. That put the difference at seven (43-36).

Pentucket then went into a five-minute scoring drought that sealed their fate.  During the same time frame, Archbishop Williams added eight points to their lead (51-36), and the reserves from both sides finished the last minute.  Jaylen Williams tallied from in close twice and Leah Spencer and Katryna Veasey had the other baskets in the late-game run.

There were few easy baskets at any time for Pentucket.  6-3 sophomore Jaylen Williams patrolled the lane on defense and the usual drives of the Sachems were discouraged.

Leah Spencer did a good job of keeping Kelsi McNamara (13 points) from getting looks at 3-point attempts.  Kelsi had only one three in the game. 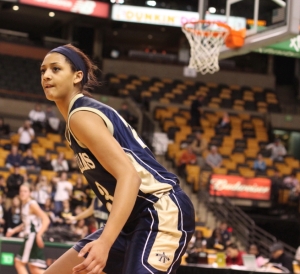 Sophomore 6-footer Alana Gilmer (12 points) put the defensive blanket over Coley Viselli (3 points).  Just getting by Alana was difficult for the talented Pentucket senior and there was always 6-3 Jaylen Williams ready to pick up the defensive slack if Coley was driving.

If you had to narrow Pentucket’s twenty-four wins down to two reasons, I would say that one was being able to force turnovers that lead to quick points and the other was making three’s.  Neither one of those went the Sachems way on this day.

The Sachems made only three long ones.  They really had trouble, because of the Archbishop Williams’ height, getting open looks even from long range.

Coley Viselli was injured early in the second quarter but came back before halftime.

At the end of the game, four seniors (Emily Dresser, Coley Viselli, Tess Nogueira, and Alex Moore) had ended their Pentucket hoop careers.

During Coach John McNamara’s seven seasons with Pentucket, the team has always been able to reload the following season despite graduation losses.  Don’t bet against it happening again.

Plenty of support on hand at the TD Garden for both teams.

I continue to wonder why those in charge of the chanting student sections don’t discourage them from taunting each other.  Directing positive chants toward their own team would make a lot more sense and create fewer hard feelings………but what do I know?

Alex Moore gets her shot blocked by Sara Ryan

Tess Nogueira was six-for-six from the line

Coley Viselli heads for the hoop

McKenna Kilian gets into the lane