(Worcester) No last-minute heroics needed by Danvers this time.

After coming dangerously close to exiting from the tournament in the D3 North finals (Wayland) and the state semifinals (Martha’s Vineyard), Danvers pulled ahead of Smith Academy by double figures for good early in the final quarter and won the state title, 66-50, on Saturday afternoon at the DCU Center in Worcester.

(Both teams are the Falcons.)

DHS was hot during the first nine minutes against the SA zone burning the visitors from Hatfield with five three’s (Nick McKenna 3, Nick Bates and Eric Martin 1 each) and getting a 22-6 spread.  Was this going to be a blowout?  Hardly.

You live by the three, you can also die by it.  Danvers cooled off in the second quarter and Smith rattled off thirteen unanswered points.  While Danvers was pointless for nearly seven minutes SA closed to 22-19 before a Nick Bates layup in the last three seconds. 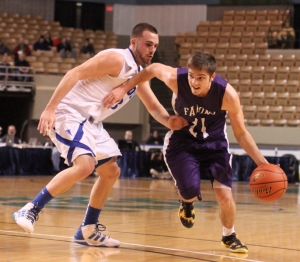 Nick Bates (12 points) responded with an old-fashioned three of his own and Seaver Rickert scored from in close on a pass from Derek McMahon.

At this point Danvers lead was a mere two points (29-27) with 6 ½ minutes to play in the third quarter.  This was when the pull away began for the Eastern Mass champs.

The Western Mass champs would cut the lead to six (38-32) before Vinny Clifford (11 points) struck from the corner on an inbounds play. 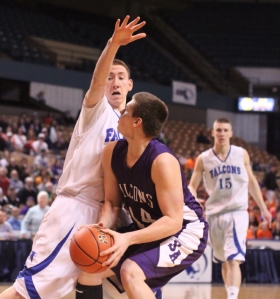 This make was crucial for Danvers because cold Vinny had now become hot Vinny.  The 6-2 sophomore had been through a disastrous first half missing every shot (including several air balls) and had a couple of turnovers.

But now Vinny was hot and he scored the next eleven Danvers points, including eight of them in the first two minutes of the final quarter.

While Vinny was making shots (a jump shot and two 3’s), SA was making only three-of-six free throws.  The result of all this activity was a 50-37 Danvers lead with six minutes to go.

Smith rallied to within ten (58-48) as David Longstreeth connected from long range and Will Halloran put in a layup with 2:19 left.

But Danvers took the “scary” out of the rest of the game by making six straight free throws and getting a Nick McKenna layup off of a steal to notch their second straight championship.

All five of the Danvers starters ended up in double figures.

Nick McKenna’s defense was a key to the win as he guarded Mat Sulda (11 points).  The speedy 5-10 lefty had been averaging 19.3 points per game.

Nick Bates had a double/double getting thirteen rebounds to go along with his twelve points.

This was the first state final for Smith Academy since 1992.

Mat Sulda ended up with 1579 career points.  Both his uncle and his grandfather were 1000-point scorers at Smith.

Danvers returned four starters to this year’s team but graduated was 6-7 George Merry (WPI).  The 2012-13 squad had to adjust significantly.  Gone were George’s interior defense and inside scoring.  But credit Coach John Walsh, the team adjusted well enough to win a second title.

Derek McMahon takes off with a turnover 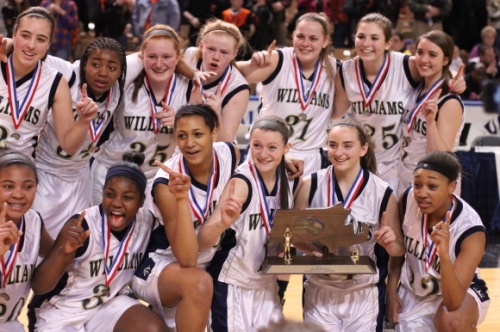 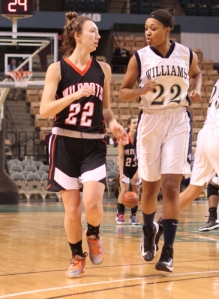 (Worcester) Archbishop Williams (23-5) will be switching from Division 3 to Division 1 next season.

Unfortunately, for the Lee Wildcats (19-6) they had to face the Bishops in this year’s state D3 finals and were routed, 60-33, on Saturday morning at the DCU Center in Worcester.

Both Lee and Pentucket (state semifinals) had few answers for the size and skill of the girls from Braintree.

In both of those games, the Archies were able to virtually shut down a top player on the other team.  It happened to Coley Viselli (3 points) of Pentucket and this morning Stephanie Young (3 points).

Both girls were 1000-point scorers for their respective teams but against ABW, and specifically 6-foot Alana Gilmer, the half-court openings were scarce.

MassLive reported that Stephanie Young was one-for-sixteen.  By the time the Western Massachusetts Player-of-the-Year made her only points Lee was behind, 52-27, in the final quarter.

This game got out of hand in the first four minutes.  During that segment all five ABW starters had scored and the Bishops were away on a, 13-0, advantage.

In the very first possession, the Archies had three offensive rebounds before Sara Ryan nailed a three.  The second, and even third, chance opportunities were frequent for the tall Bishops.

The Wildcats were able to get within eight (21-13) in the second quarter after a Courtney Picard jump shot but the Bishops closed 8-2 the rest of the half and led, 29-15.

Alana Gilmer (14 points) started the second half with a three after getting a rebound and then was on the scoring end of a fast break.

Lee answered with a three from Eileen Dooley (16 points).

Back came 6-3 Jaylen Williams (14 points) with a spin move for a layup and then a 10-foot jump shot.

The work of the two sophomores (Alana and Jaylen) boosted the Bishops margin to twenty (38-18) with fourteen minutes left to play.  The outcome mystery had been solved early.

Plenty of reserve action by both teams the rest of the way.

Getting the biggest cheer was Julie Bloomer, put in by Coach Bancroft with just a few seconds left.  The Bishops junior was wearing a conspicuous knee brace.

Freshman Ednaija Lassiter (11 points) came off the bench to tally nine points in the third quarter for ABW.

The Bishops ended the season winning fourteen of their last fifteen.

Lee won nine of their last ten with the loss today.

This was Lee’s third time in the state finals in the last four years.  The Wildcats defeated Pentucket in 2010 to get the state title.

5-2 senior Eileen Dooley paced Lee with sixteen points.  Her quickness enabled her to get plenty of shots off.

Lee has won the Western title nineteen times in the last twenty-five years.

Jaylen Williams has verbally committed to Penn State.  Not bad for a sophomore!

Alana Gilmer has offers from UMass, Quinnipiac, and URI.  BC, Georgetown, and Villanova are also interested.