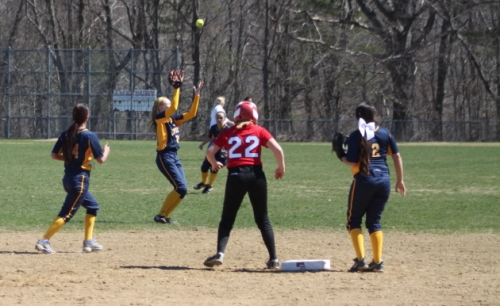 Malia Roberto (#7) after her homer in the first inning.

(Amesbury) Lynnfield took a four-run lead into the sixth inning before falling apart in the field and losing to undefeated Amesbury, 9-5, on a sunny Wednesday morning in Cape Ann League softball.

The Pioneers (2-3) had six errors in the final two innings and therein squandered an impressive hitting display in the first two innings.

Lynnfield had four runs after four batters to start the game.  Two singles (Rachel Buzzotta and Mandy McQueen), a triple (Jade Palladino), and a home run (Malia Roberto) in the top of the first inning had me wondering what the Pioneers had been served for breakfast! 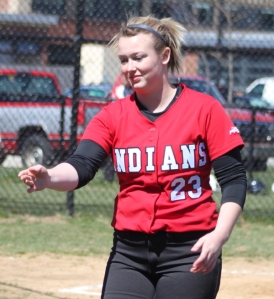 pitcher Carolina Merrill after the game

But a strikeout by winning pitcher Carolina Merrill enabled the Indians (3-0) to end that first inning with two Pioneers stranded and only four runs given up.

Lynnfield had a run in and two more runners on in the second inning when centerfielder Janine Fatal made a nice running catch to limit the damage to one run.

Surprisingly, the Pioneers had just two hits over the final five innings but their defense held Amesbury to one run through five innings.

However, that 5-1 Lynnfield lead after 5 ½ innings melted like a Hodgies ice cream cone on a hot day in the bottom of the sixth inning.

That sixth is probably an inning that has been deleted from the Lynnfield scorebook by LHS coach Peter Marinelli.  And no one could blame him! 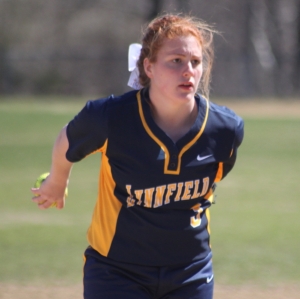 Things got so bad that I heard pitcher Jade Palladino yell out in the midst of it, “Let’s get it together out here!”

When you put together a mixture of five hits, four errors, and a wild pitch, bad things will happen.  Twelve Indians batters took part in that sixth inning and eight runs scored.  More than enough to win this one for Amesbury.

Junior Malia Roberto had a 3-hit morning including a 2-run homer to right-center in the first inning.

Senior Mandy McQueen had two singles and scored a run for Lynnfield. 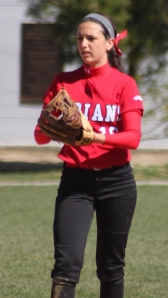 Autumn Kligerman made a nice play on a line drive to go along with scoring a run, getting a hit, and driving in a run.

A key in the Amesbury win was the way senior Carolina Merrill took charge in the last five innings.  When she started mixing in a very good changeup with her fast pitches, LHS batters lost some of their early-inning aggressiveness at the plate.

I suspect that the LHS outfield defense will be getting some serious practice time in the near future.  Two drops on routine fly balls were a big part of the Pioneers demise in that fateful sixth inning.

Both teams return to action on Friday.  Lynnfield hosts Malden (10:30AM) while Amesbury visits Pentucket (10AM).

Rachel Buzzotta steps on home in the first inning

Carolina Merrill about to catch a popup in the seventh inning