(Newburyport) “When she was good
She was very, very good
But when she was bad
She was horrid!” (part of a nursery rhyme by Henry Wadsworth Longfellow)

Now that you know the score it will take very little imagination to place “Amesbury” and “Newburyport” in the rhyme.

The two teams played a week ago and Amesbury won, 4-1.  Who saw an 18-0, mercy-rule game coming?  I will admit to being stunned by the way this game went! 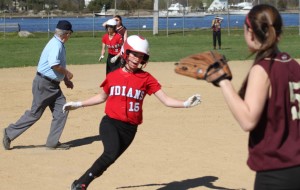 Indians jam the base paths

The Indians (9-1) had only six hits two days ago in a loss to Triton against Mara Spears.  But today they battered the Clippers Vicki Allman for eighteen hits………and most of them were hard hit.

The big story out of this game was Amesbury’s second inning.  The Indians sent eighteen batters to the plate and collected twelve hits and scored thirteen times.  Amesbury had two triples (Amanda Schell), a double (Alexi Boswell), and singles galore.

The Indians had gotten a run in the first inning as Cassie Schultz’s double brought in Amanda Schell.  So the Clippers found themselves down, 14-0, after 1 ½ innings. 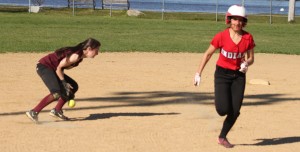 trouble in the field

The big question then was, “How does the Mercy Rule work in the Cape Ann League?”  The answer was that it’s twelve runs after five innings played.  So Newburyport obviously had its work cut out for it to extend the game beyond five innings.  It didn’t happen on this afternoon.

As I suggested in the opening paragraph, Amesbury had everything going well including pitching, fielding (no errors), and hitting.

Starter Carolina Merrill gave up four hits in four innings.  The Clippers (5-4) had two on (Kendra Dow and Lea Tomasz) with one out in the first inning but the AHS senior struck out Carley Siemasko and Jackie Krusemark to end the threat.

Junior Amanda Schell had a Cape Ann League Division 2 Player-of-the-Year game for Amesbury.  The AHS shortstop handled six chances in the field without error.  She was more impressive at the plate going five-for-five and driving in five runs.  She also scored four runs.  Remarkable performance!

Cassie Schultz reached base all five times she batted getting three hits and adding three RBI.

The weather was remarkable.

This game was originally scheduled for 7PM under the Cashman Park lights.