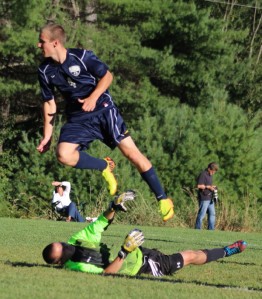 (Naples ME)  This was a game begging for the mercy rule.

The Wildcats have plenty of returnees from a 2012 team that went 10-5-1. Their 2012 season ended with a loss in the Class B West semifinals to Yarmouth.

The Wildcats dominated in every facet of soccer.  Especially noticeable (to me) was their ability to make their short passing game work.

The only York struggle, in my opinion, was their ability to finish in the early going.  You may find that assessment ridiculous in a 12-0 game but trust me the Wildcats misfired on a host of point-blank attempts especially in the first forty minutes.

The Wildcats did quite a bit of long-range blasting away in the first half and tallied only three three times.

Mitchell Hickey (3 goals) tries to get past Brandan George

In the second half, the York passing was terrific. The shooting opportunities that would have been taken in the first half gave way to passes for even better shots.  That unselfishness led to seven second-half goals in a thirteen-minute segment of the second half.

Sam Rickerich and Mike Gallagher each tallied twice for York.

Josh Mitchell opened the scoring five minutes into the game.  He picked up his own rebound from in close and applied the finish.

If there was any positive takeaways for Lake Region it was their ability to keep York off the scoreboard for the next seventeen minutes.  But believe me (again) there were some golden opportunities for the visitors.

Mitchell Hickey broke the scoreless drought on a pass from Sam Rickerich at 18:50.  From where I was standing, near the Laker goal,  Mitchell warded off defender Zeke Tocci to get a clean look.

Mike Gallagher notched the third first-half goal, capitalizing on a juicy rebound after firing  a hard shot.  Jordon Gomes was given an assist.

Unfortunately for the Lakers, Brandan George took a shot in the nose in the last minute of the first half and had to leave the game.  Brandan, in my opinion, was by far LR’s best defensive player.  He is tall with a good foot.

Without Brandan on board to start the second half, you suspected that the three-goal deficit would increase considerably…………and it did.

The Lakers survived the first eight minutes of the second half but in the next thirteen minutes the goals came like a flood.  Much better shot selection by the Wildcats, against an inexperienced defense missing their best defender, led to seven scores.

LR goalie Mike Rust was lifted after the onslaught.  The junior made a number of remarkable saves during the afternoon but the sheer number of the York attempts was bound to produce results.

For the last nineteen minutes of the game York minimized their attack considerably.  Plenty of safe passes zipped around the midfield area as the clock wound down.

Mike Rust makes a save

Two things I admired about the Lakers were that they never gave up and they didn’t take out their frustrations by fouling.  There were few whistles.  Jordon Gomes did get into first-half trouble for not keeping his mouth guard where it belonged.  There was also some clothing violation by York before the start of the second half.

York looks to be a team that should be in the mix when the Class B West tourney gets underway later in October.  Their next game is Tuesday hosting Cape Elizabeth at 4PM.

The Lakers looked overmatched to say the least against a team of York’s skills.  First year coach Michael Chaine will hope to see his team improve next game when they host Wells on Tuesday at 6:45PM.

Special thanks to the athletic departments of both schools.  They provided me with the rosters I needed to be able to identify pictures.

shot at the camera