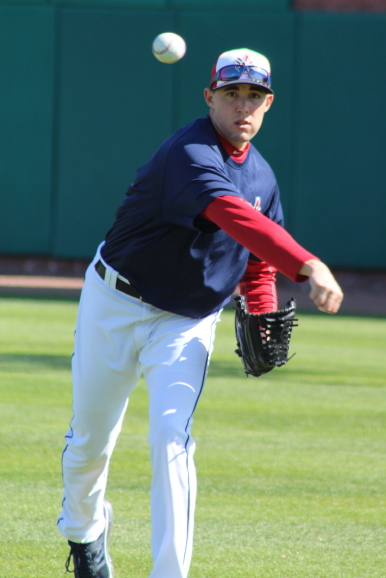 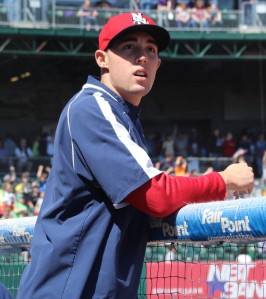 Aaron Sanchez views the action from the Fisher Cats dugout

The weather was beautiful with plenty of Manchester (NH) school kids on hand for the 10:35AM start.

New Hampshire is the AA minor league team of the Toronto Blue Jays.  With a little bit of homework I learned that the Blue Jays #1 prospect, pitcher Aaron Sanchez, was on the New Hampshire roster.

Pitchers are the most challenging to get pictures of unless they are pitching.  Otherwise they’re usually out in the bullpen far away from any pictures ……… unless they’re pitching the next game.  And that was the case today with Aaron. He was scheduled to pitch tomorrow (Thursday), so he warmed up briefly before the game and then was in the dugout.

Aaron was drafted in the first round by Toronto in 2010.  The 21-year-old can get over 95MPH with his fastball and is developing pitches to go with the heater.

Similar to Mookie Betts of Portland, Aaron should be at AAA before the 2014 season is over.

Fisher Cats starter Casey Lawrence served up a 3-run homer down the rightfield line to Brian Burgamy in the third inning.  That shot provided more than enough runs for Greg Peavey.

Third baseman Andy Burns is off to a nice start with New Hampshire so I took a number of pictures of him.

I was disappointed with the efforts of Fungo the mascot.  He tried to outrun one of the kid spectators and didn’t come close to getting the job done.  The big problem was the bad start.  The kid was so confident that he was looking over his shoulder as he went from third to home.

They had a shirt shoot that stirred plenty of excitement.  I have seen that done at the TD Garden but not at an outdoor event.

Shortstop Kevin Nolan made a nice stop and throw on a ball deep in the hole.

Andy Burns turns a popup into an adventure

Andy Burns nearly misjudged a foul popup.  He came in for it and then started fading back eventually ending up on his back after he made the catch.  His teammates were merciless to him when he returned to the dugout.

I continue to recommend a visit to a minor league baseball game at the home of the Fisher Cats, Northeast Delta Dental Stadium.  The prices are good and the entertainment is constant.  You can get close to the action and you may well see one of the future stars of major league baseball.

Thanks again to media relations boss Tom Gauthier for arranging for my visit.

Aaron Sanchez in the dugout 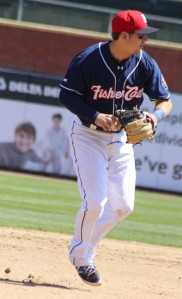 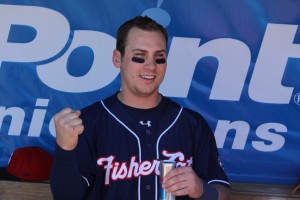 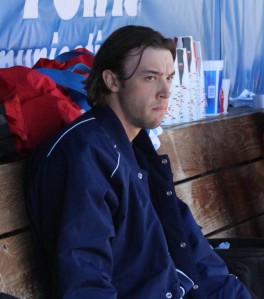 Andy Burns in on a bunt