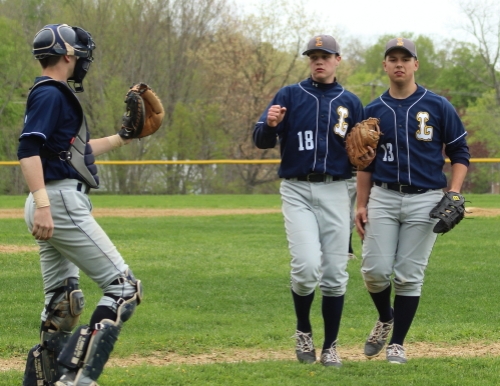 Greg kept the Indians off the bases and faced only nineteen batters during the last six innings.  Amesbury left only two runners on base.

Both teams scored in the first inning.  The Pioneers added single runs in the third and sixth innings.

The Indians (5-11) hurt themselves with wild pitches and over-aggressive base-running.

Amesbury came right back in their half of the first to tie the score.  Ben Cullen doubled to left center and Mac Short delivered him with a sharp grounder up the middle.

The Pioneers took the lead for good in the third.  Jordan Roper doubled down the left field line and raced home on junior Jake Rourke’s liner up the middle.  Jake’s hit was tipped by pitcher Nick Hawrylciw but not enough to keep in from reaching the outfield.

Ben Cullen ran into an out on the bases in the Amesbury third.  Ben singled, and stole second with one out.  He was on his way toward third but pitcher Greg Basilesco sniffed out what Ben was up to and ran right at him between 2B and 3B.  Ben was eventually tagged out by shortstop Jordan Roper.

The Pioneers came close to more runs in the 4th and 5th innings.  Ryan Battaglia was tagged out at the plate in the 4th inning.  In the fifth, Nick Hawrylciw escaped a bases-loaded, one-out situation with a force-out at home and a strikeout.

Jared Dupere doubled to lead off the Amesbury fifth but Greg Basilesco retired the next three Indians.

The Pioneers added an insurance run in the sixth inning.  A hit batsman (Ryan Battaglia) and a walk (Jack Fraulini) set up a pitching change for Amesbury with Levi Burrill taking over.  Levi advanced the two runners with a wild pitch and intentionally walked Jordan Roper to load the bases with two outs.  Next batter Jake Rourke was hit by a pitch driving across Ryan Battaglia with the third Lynnfield run.

Ben Cullen caught in a rundown

Now down 3-1, Amesbury had Ben Cullen back on base with a walk.  The AHS senior stole second and, because catcher Danny O’Leary’s throw went into center field, was able to reach third with one out.  On Mac Short’s infield out Ben started for home and was caught (and out) for the second time on the bases.

Scary moment in this game was when LHS shortstop Jordan Roper chased a high foul popup along the line in left in the sixth inning.  Jordan went into a slide knowing a fence was coming up but ended up sliding into one of the poles holding up the scoreboard.  Both coaches were out there in a hurry as well as the Amesbury High School medical staff.  To the relief of everyone, Jordan was up and back playing in a few minutes.

Jordan Roper goes into a slide chasing a foul ball

Jordan, who made the Cape Ann League All-League team in 2013, has signed of letter of intent with Division 2 Assumption for next year.

Lynnfield tried a suicide squeeze but Tony Costa fouled off the bunt attempt.

Weather?  After yesterday’s 80’s, today’s 50’s were a rude shock.  The threat of rain was persistent. 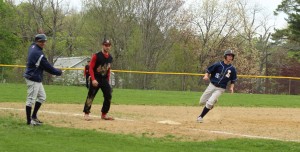