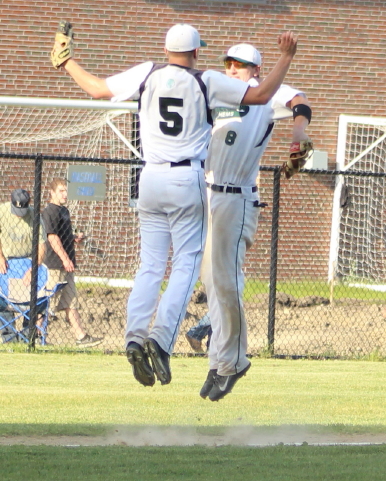 Ryan Kuchar and Bobby Barry celebrate the win over Lynnfield

Ryan Kuchar pitched a 2-hit, complete game for the Sachems

The Sachems (15-8) now move to the semifinals on Wednesday afternoon (4PM) at Fraser Field (Lynn) against another Cape Ann League opponent, Hamilton-Wenham.  Pentucket and HW split 2-1 games during the regular season.

Both Lynnfield hits (Greg Basilesco and Nick Pascucci) were in the third inning when the Pioneers (15-7) picked up their run.

Pentucket ended up with seven hits and had runners in scoring position in the first, second, and fourth innings but Lynnfield pitcher Dave Johnson escaped each time.

The escaping ended in the 5th and 6th innings as the Sachems collected two tarnished runs in one inning and an untarnished insurance run in the other inning.

Ryan Kuchar was the big story as he kept Lynnfield from getting anything going on offense except in the third inning.

In that third inning, Greg Basilesco singled to right and reached third base after two straight fielders’ choices.  Nick Pascucci’s bloop single to short center earned him the RBI.

Down 1-0, Pentucket had a great chance in the fourth inning.  John Sirois’ single was followed by a Greg Basilesco (3B) error on a grounder.  A fielder’s choice moved the runners to second and third with one out.  But pitcher Dave Johnson retired Bobby Hallowell and Kiernan Haley and the Pioneers still had their 1-0 lead.

The top of the fifth turned out to be the game-decider.  Pat Beaton led off with a double to left.  It is not usually a good idea to try for third when a grounder is hit to the shortstop………but Pat tried it and got away with it because third baseman Greg Basilesco dropped the throw from shortstop Jordan Roper.  Lynnfield then tried to turn two on DJ Englke’s grounder to third but could only get the force at second.  Pat Beaton scored on the play to tie the game.  Still only one out.  Ryan Kuchar singled getting DJ to second.  The Sachems then pulled a double steal on a pitch in the dirt that catcher Traverse Briana had no chance to do anything with.  The next play will be a bad memory for the Lynnfield faithful for a long time.  John Sirois hit a grounder to short with two outs.  From where I was standing, shortstop Jordan Roper didn’t handle the ball cleanly, and then threw high to first.  It looked as if first baseman Spencer Balian came off the base reaching up for the throw and that was why John Sirois was safe.  Not so according to the infield umpire.  I heard him tell LHS coach John O’Brien that the runner had beaten the throw anyhow.  The play was huge because if John is out the inning is over.  If he’s safe, which was the ruling, the Sachems have a second run.

Bobby Hallowell in with the third Pentucket run

Nothing controversial about the Sachems third run.  Bobby Hallowell tripled to right in the sixth inning and was driven home by Pat Beaton’s two-out bouncer up the middle.

Lynnfield had some two-out excitement in the seventh when Spencer Balian reached on a bad-bounce error by third baseman Bobby Barry.  Greg Basilesco next hit a grounder at shortstop Pat Beaton that also took a bad bounce but the PHS shortstop reacted quickly and got an assist on the final out of the game.

Weather?  When you can have sun, a little breeze, and no bugs you can’t ask for much more.

Good setting at Lynnfield to watch a game.  They have a gradual hill behind the backstop. 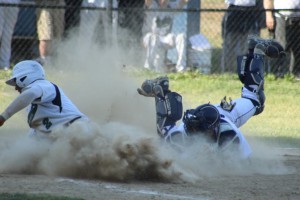 Pentucket made an unsuccessful attempt at a suicide squeeze in the fifth inning.

Ryan Kuchar pitched a no-hitter a month ago against Rockport.

Many of my pictures have construction vehicles in the background.  A number of new playing fields are getting constructed.

North Reading coach Frank Carey was part of the crowd.  His Hornets are still alive in D3 North.

Ball gets past 3B Greg Basilesco

Ryan Battaglia stretches out on a shot to right 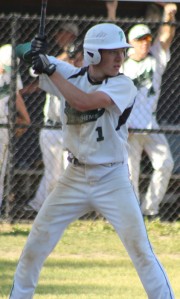 Shortstop Pat Beaton throws to first for the final out 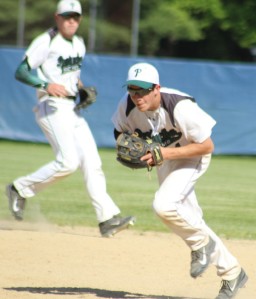