Senior Jen Migliaccio had an assist and a goal for the 11-5-6 Royals.  Jen was part of the 2011 team that also won the D4 North crown.

The Georgetown Royals girls’ soccer program has never won a state semi-finals game.  They’ll get the chance to correct that flaw in their history when they face South champ East Bridgewater on Wednesday night (5PM) at Manning Field.

East Bridgewater was the #1 seed in the South and sports an impressive 18-1-3 record.

Winthrop, out of the Northeast Conference, made the post-season tournament thanks to the Sullivan Rule.  But once in as the 16th seed, showed that they belonged bringing a six-game win streak to the title game with Georgetown.

The Vikings (10-10-2), however, were facing a team that had a winning record in the Cape Ann League and had a string going of three straight shutouts.

You knew something had to give and what did give, for a half, was runs to scoring position.  More passes were kicked out-of-bounds then connected to teammates on the field.

But one advantage that G’Town had, in my opinion, was speed.  Jen Killian, Cayla Durkee, and Mary Laut put game-long pressure on the Vikings’ defense with their speed. 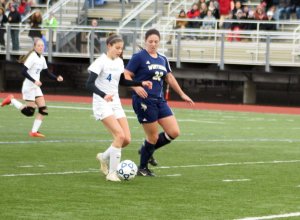 That pressure paid off at 30:21 of the second half when junior Cayla Durkee took a pass from Jen Migliaccio and ran into space on her right.  Winthrop GK Poli Tsiotos stayed back in the net and Cayla was able to pick the left corner on the ground to give the Royals a 1-0 lead.

Four minutes later Poli made a remarkable save on a blast from straight away by Jen Killian.  I thought, at the time, that the save might be memorable if Winthrop came back to tie the score……..and they nearly did.

Senior GK Kaylie Sapienza ended up with a shutout but nearly was burned shortly after the big save by her counterpart.  How?  Amy Sena launched a high shot from the right at Kaylie.  It had the makings of a routine save but the ball went through the G’Town GK’s hands and right to the Vikings Holli Benson in close.  Holli shot quickly and the ball sailed over the top of the G’Town goal.  Very close to a tie game. 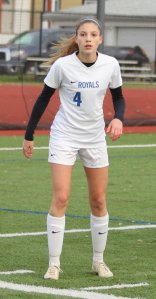 Jen Migliaccio explained how she scored the second Georgetown goal.  “When I had the ball coming in (from the right) I wasn’t sure what the goalie would do.  If she stayed in net I’d go for the corner but she came out and I just popped it over her head.”

Jen’s goal gave the Royals a two-goal lead with 7:35 left.  The 4th straight shutout was preserved the rest of the way.

There was plenty of contact in this game.  Right away you could see that the Winthrop players were bigger than most of the Royals.  Many of the 50-50 balls ended up with someone on the ground.

I was very impressed with Amy Sena of Winthrop.  The senior was all over the field.  She may have taken at least ten throw-ins.

The hustle of GTown freshman Mary Laut was noticeable.  She had a bunch of runs down sidelines.  She was a big part of the pressure of speed on the Winthrop defense.

Georgetown had a win and a tie against North Division 3 champions Lynnfield in the Cape Ann League.

It I gave out “stars,” I would have given the #1 star to the Royals Jensena Moner.  The midfielder showed up in many of my pictures in different areas of the field.  Jensena was sent flying by several Vikings including one time onto the surrounding track.  Each time she got up, and played on often dribbling into openings or passing to teammates.

Both teams were smart enough to go to their locker rooms during halftime.  The rest of us had to spend ten chilling minutes coveting a warm place.

I saw Jen Migliaccio play on the 2011 Georgetown team.  At first sight I was sure that she had to be Nicoline Holland’s little sister.

(This blog is easily corrected so let me know if there is a miscue.)

Jen Migliaccio gets in close in the first half 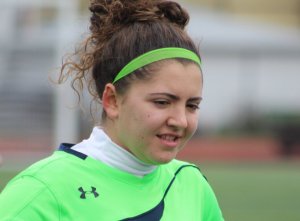 Heidi Benson and Jensena Moner on the run 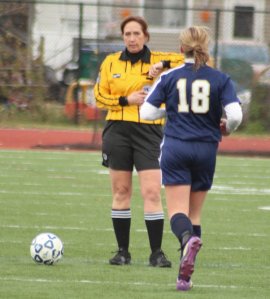 Mackenzie Chiudini gets a yellow card

Cayla Durkee near miss in first half