Ben Mason found plenty of daylight and the end zone five times in a career game on offense.

On Thanksgiving Eve the Newtown coaching staff decided to feature Ben Mason on the offensive side of things against Masuk. Did he ever make an impression! Ben was a key piece in Newtown’s 40-8 thrashing of the Panthers on chilly Wednesday night at Masuk.

Ben Mason with blockers aplenty and paydirt ahead

Ben had played offense before (nine carries in 2015) but obviously in a limited fashion. Now the cat is out of the bag and down-the-road playoff opponents (selections announced Friday) will have another thing to consider defensively.

On this night it appeared that Masuk expected the Nighthawks to run inside and committed heavily to that assumption. Unfortunately, for the Panthers, Newtown opted to attack the outside edges from new formations with a new back. Five touchdowns in the first half spoke clearly of the rousing success of the Newtown approach.

Ben was able to get to the outside three different times with blockers looking in vain for Panthers to block on touchdown runs. Only the sideline official ran with Ben the final twenty yards. It was that kind of night.

Key moment? After the first Ben Mason TD, a penalty forced a longer than usual extra point attempt that was missed by Ryan Kost. Trailing just 6-0, you could envision Masuk evening the score and getting ahead with a PAT. What happened? Ryan Kost’s kickoff hit the ground and for some reason wasn’t picked up (fallen on) by any of the Panthers including nearby Collin Briganti. Aggressive Mike Doyle fell on the free ball setting Newtown up at the Masuk 21. So instead of having the ball and a chance to tie or go ahead, the home team was back on defense. Before you knew it, QB Justin Dunn connected with Ben on the right and the talented senior crossed the field to the left corner for his second score. 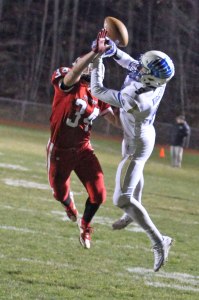 battle in the air

This turn of events started Masuk’s downhill slide that put Newtown in total command (34-0) by halftime. Many in the crowd chose the exits over another half of one-sided football.

Masuk finishes their season at 6-4. A promising 6-of-7 start turned into a season-closing three-game losing streak.

Seniors from Masuk were honored before the game.

No sign of Newtown’s Hunter Cobb or Jared Pearson in this one. Ethan Carpenter left the game early with a leg injury.

The Nighthawks (9-1) played without Hunter and Jared in the loss to Fairfield in their previous game. The setback ended a string of 40 straight wins for Newtown during the regular season in the South-West Conference.

The Nighthawks had two first-half interceptions including one on the goal-line.

For those of us easily confused, the program was a problem. There were two #5’s for Newtown as well as an unlisted #8. #8 turned out to be Nick Samuelson whose number was changed from 52 because he was getting some reps on offense. 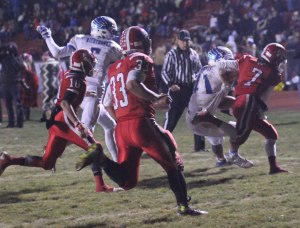 Trying to keep Ben Mason out of the end zone

Masuk’s Nick Dellapiano added to his impressive total yards (1415) getting a 45-yard score from QB Matt Hersch in the third period.

The last Masuk win in their series with Newtown was in 2011. On that evening at Newtown the Nighthawks had no answers for Casey Cochran and the Panthers. It was a mismatch similar to the 2015 version.

Joey Capodagli and other Masuk seniors honored before the game 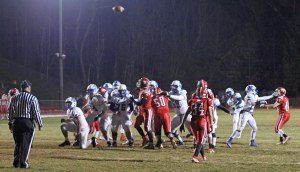 Action on the line of scrimmage

Ben Mason with lots of room on the left sideline 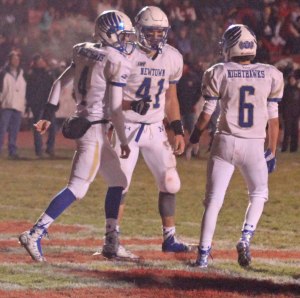