Hayley Catania holds Newburyport to one hit in 6-0 shutout

Hayley Catania struck out nine Clippers and allowed only one hit

Hayley retired the last ten Clippers she faced and also drove in a run in Amesbury’s two-run first with a sacrifice fly.

Sophomore Caity Baker had the big hit for the Indians when she homered to left center in the sixth inning.  No fence at Amesbury Middle School so Caity’s line drive rolled a long way.  There was no play at the plate.

Newburyport’s only hit came in the fourth when freshman Olivia Salvatore lined to right. 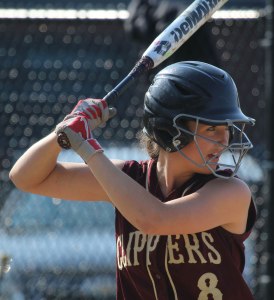 It has been a rough last eight days for Newburyport.  The Clippers went into the eight days 6-5 but after today’s loss are now 6-9.

Amesbury (10-2) has won six straight and have qualified for the post-season tournament.

The Clippers did get Paige Gouldthorpe to third base in the first inning but a Caitlin Clarke groundout ended the threat.

The Indians took the lead (for good) in the first inning.  Maddie Napoli reached on a bunt and then stole second on a very close play.  Senior Zoe Fitzgerald singled to right center scoring Maddie.  Zoe took second on the throw in from the outfield and reached third on a Stephanie Gleason wild pitch.  Hayley’s sacrifice fly delivered Zoe.

Hannaih Burdick had an RBI in the third inning

Amesbury added two more runs in the second inning.  Caity Baker singled down the third base line and reached second on a passed ball and third on Adrienne Harris’ sacrifice bunt. She scored on Hannaih Burdick’s infield out.

Lauren Fedorchak continued the inning with a bunt single and then stole second base.  Maddie Napoli drove Lauren home with Amesbury’s fourth run.

Paige Gouldthorpe reached second with two outs in the third but Hayley was able to catch freshman Annie Siemasko looking to end the inning.

In the Amesbury third Emily Robinson got caught rounding second and was tagged out after a brief rundown by third baseman Colleen Twomey.

In the Amesbury fifth, with Hayley on second, centerfielder Paige Gouldthorpe made a nice catch of Emily Robinson’s line drive to end the inning.

An infield single by senior Megan Reid was followed by Caity Baker’s home run in the sixth inning.

Maddie Napoli, Megan Reid, and Caity Baker each had two hits for Amesbury.

This game was played in just over an hour.  Both pitchers (Hayley Catania/Stephanie Gleason) threw strikes.  There was only one walk between them.

Autumn Kligerman was in the house.  What a season she had last year for the Indians. 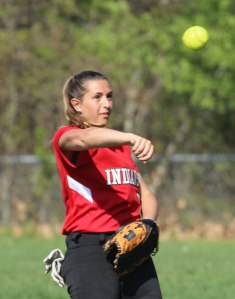 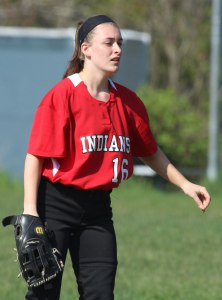 Emily Robinson caught in a rundown 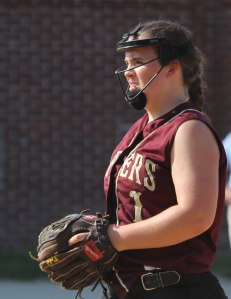