The Indians (4-2-4) used a second-half score (see above) by senior Emma Richardson to get the job done.

Triton (2-6-1) played well enough to win but, thanks to a solid Indians defense, were limited to long shots for most of the afternoon.

Junior Meredith Kennedy drilled home one of those long shots for the Vikings that led to a 1-1 halftime tie.

Amesbury arrived late (to Triton) but started fast.  Sophomore Chelsea Lynch broke in very early with pregame space and time to dribble closer, look up, fire, and score.  At that point I suspected that Triton might be in for a long afternoon.  But it wasn’t that way at all.

The Vikings defense tightened up considerably and Amesbury chances were few.  On the other hand, Triton made runs down the sidelines on several occasions.

Junior Meredith Kennedy made one of those runs down the left sideline midway through the first half.  Meredith’s left-footed shot sailed over Amesbury goalie Alli Napoli to tie things.

The Indians got in real close a number of times but senior Triton GK Dayna Rybicki had answers.

Emma Richardson registered the game-winner midway through the second half.  The senior took a feed from teammate Emma DiPietro and raced down the right sideline.  As Emma cut toward the net she lifted a shot over Dayna Rybicki.

That goal held up.

Another returning CAL All-Star, Ashley Pettet, did a nice job passing and defending for Amesbury in the midfield area.

Next for Amesbury is a game tomorrow (Friday) at home against seriously depleted Pentucket.

Triton will be at Ipswich on the same afternoon.

Triton has tallied seven goals in nine games while giving up twenty-eight goals.  I have no doubt that the Vikings defense I saw this afternoon is a whole lot better than it was earlier in the season!

Instead of punting the ball out, Alli Napoli often passed the ball toward the sidelines.  That strategy led to several quick Triton counter-attacks.

Sara Stackpole was on the sidelines for Triton. 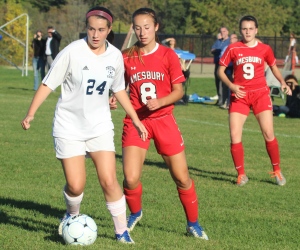 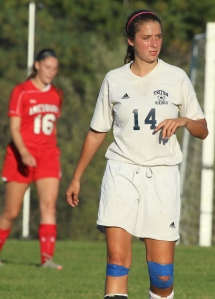 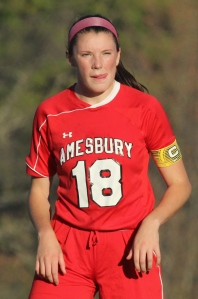 Action in front of the Triton net 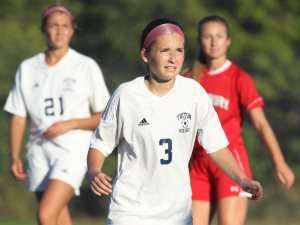