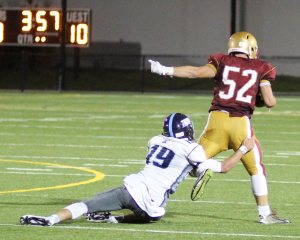 (Newburyport MA) I took in my first football game at Newburyport’s refurbished stadium on a pleasant Friday night of Cape Ann League action.

Wow!  That place is terrific.  Turf is wonderful.

In the second half, Triton (5-0) shifted into a level of offense that the Clippers (2-3) couldn’t cope with.

I found the lighting to be very good for action shots.  Guessing where the action is going to happen is a significant part of shooting sports.  Sometimes you get it right.  Other times you don’t.

Disclaimer: All of the pictures in this entry are from the first half.

Clippers onto the field.

Jack McCarthy (58) has Newburyport QB Rob Shay by the ankle.

Ball in the air after one of several high snaps. 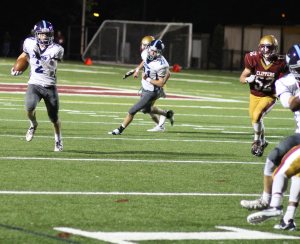 Myles Maloof (9) chases his own fumble. 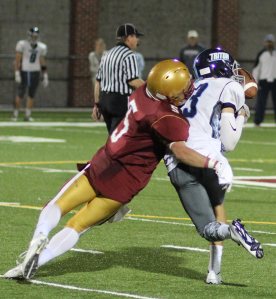