(Newburyport MA) Newburyport (10-1-2) has only allowed one goal since a 3-0 loss to North Reading in their second game of the season.

That lone goal is still the only goal after the Clippers settled for a 0-0 tie against non-league Tewksbury on Friday night under the lights at the Stehlin Stadium.

No question in my mind that Tewskbury (7-5-1) was happier with the tie than the Clippers were.  Why?  A point is a point and the Redmen haven’t qualified for the MIAA tournament yet.  Also, they held down a strong team like Newburyport while being without key scoring weapon, Marissa Ladderbush.  Marissa (sophomore) tallied twenty-five goals for the Tewksbury JV’s in 2015 and has scored goals at the varsity level in 2016.

Amelia Droschwitz (5) open in the corner on the baseline.

It had to be a frustrating tie for Newburyport.  Unbeaten in the previous ten games and playing at home seemed to the Clippers’ advantage but it only led to another terrific defensive effort.  During the previous ten, Newburyport had registered twenty-four goals.  Shutting them out in this game clearly spoke well of the Tewksbury defenders.

Second half saw ten minutes where the visitors from the Merrimack Valley Conference nearly scored.  Five minutes in a Tewksbury shot deflected off Newburyport GK Jen Stuart and off the crossbar.  Five minutes later Jen came way out to play a ball in and didn’t get it.  Fortunately, for Newburyport no one from Tewksbury could get a shot at the open net.

The rest of the way Newburyport had the chances: Colleen Byron with 15 minutes left and Sami Kelleher with seven minutes left.  With five minutes to go, a Clippers shot went off the crossbar.  But there were no goals scored. 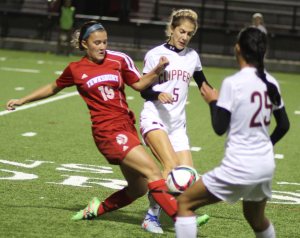 A big game ahead for Newburyport on Monday afternoon.  They will be rematching with North Reading at home.  The Hornets did a number on the Clippers, 3-0, on September 13th.  Newburyport hasn’t lost since.

One thing that didn’t go well for Newburyport was corner kicks.  They had a number of them but instead of getting the ball into the front of the net they chose to tap it to a nearby teammate.  With Tewksbury packed in the area no good shots came out of that strategy. 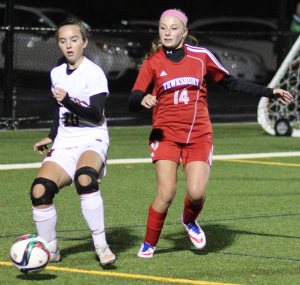 Amelia Kroschwitz (5) tries to get away from Haley Mignon (42)

Haley Mignon (42) above the crowd looking to head in a corner kick.

Action in the Tewksbury end

Eyes on the ball 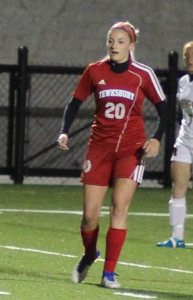