Amelia Kroschwitz had a goal and two assists. Here she powers past a Weston defender 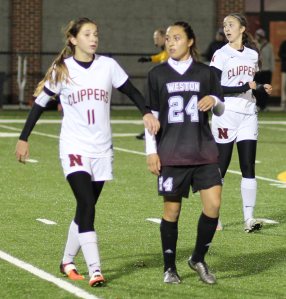 (Newburyport MA) The Newburyport Clippers rode the shooting and passing of senior Amelia Kroschwitz to a 3-0 win over Weston in the Division 3 North quarterfinals on Sunday evening.

The victory will put Newburyport (15-1-3) into the semifinals against familiar Cape Ann League foe Hamilton-Wenham on Tuesday night at 7PM at the Manning Bowl in Lynn.

Amelia, the lone senior on the Clippers, was the big story as she tallied a goal in the first half and set up two teammates for scores in the second half.

#2 seed Newburyport used the large dimensions of Stehlin Stadium to their advantage regularly forcing Wildcats’ defenders to chase and protect their end.

Weston (10-6-3) had a couple of golden chances in the first half.  Sophomore Jayme Leschly had a hand in both opportunities with long throw-ins into the box.  Newburyport goalie Jen Stuart and defender Krysta Padellaro got in each other’s way on the first one and the ball came loose.  No Wildcats able to cash in a juicy rebound.  The other glittering Weston scoring chance belonged to junior Sophia Guerin who got in tight and shot right into NHS GK Jen Stuart.

That a Newburyport opponent left a game goalless was not surprising.  The Clippers have only given up a total of six goals in nineteen games.

Amelia Kroschwitz put Newburyport on the board eleven minutes into the first half.  A Wildcats’ foul, which WHS coach John Power disputed loudly, led to a direct kick. 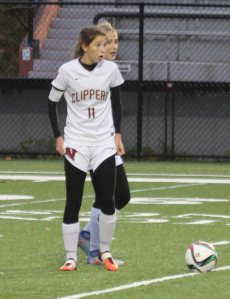 Margaret Cote and Amelia were both in position to take the direct kick from about 35 yards away.  However, instead of driving the ball, Margaret tapped the ball to Amelia who did drive the ball at Wildcats’ GK Natalie Pettirossi.  The ball came in low and hard and skidded under Natalie.

That goal held up through the first half.  Clippers Cricket Good, Anna Hickman, and Audra Greenblott put testing shots on the WHS net.  The Wildcats had the two near-goals mentioned above.

That 1-0 lead felt anything but comfortable as the second half started.

I mentioned Amelia’s shooting earlier.  The second half was about her passing.

Twice in the second half Newburyport used a set play out of a corner kick to get goals.  Instead of launching the CK long distance the Clippers got the ball to Amelia on the end line.  The Wildcats acted in both occasions as if they expected a long kick and stayed close to the net.  Amelia dribbled the end line, eluded a defender and sent the ball toward the front of the net.  Amelia’s passes turned into wonderful setups with clean looks on two occasions and produced goals by Margaret Cote (34:07) and Sami Kelleher (11:47). 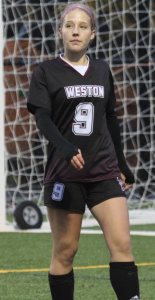 One constant was the long throw-ins of Jayme Leschly.  What a weapon that is!  From either sideline she was able to put the ball into the box and create potential trouble for the home team.

A Weston spectator told me that several of the team’s strikers were out because of injuries.  Those Jayme Leschly throw-ins might have been even more dangerous if those scorers had played.

The Clippers played a scoreless tie with Hamilton-Wenham during the season at HW.

Newburyport hasn’t lost since September 13th.  That was a 3-0 loss to North Reading.  The Hornets, also in D3 North, face #1 seed Swampscott in the game before the HW/Newburyport matchup.  North Reading won the D3 North title last season. 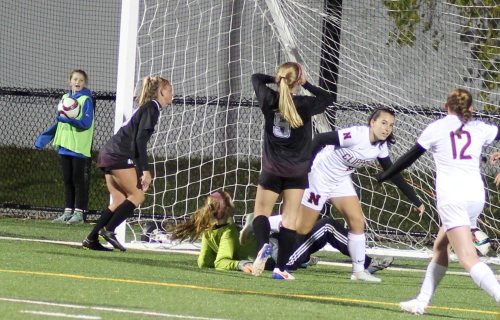 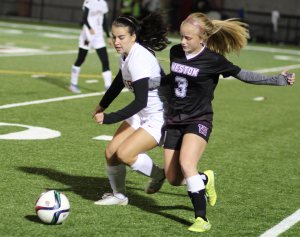 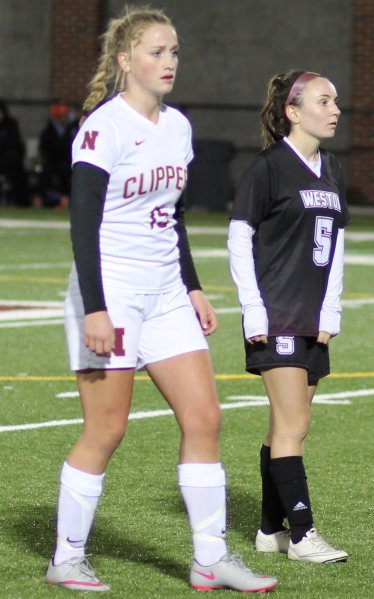 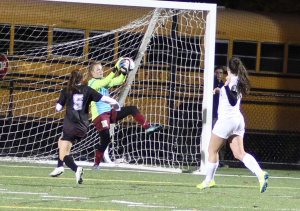 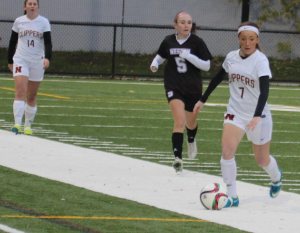 Audra Greenblott (7) dribbles along the sideline 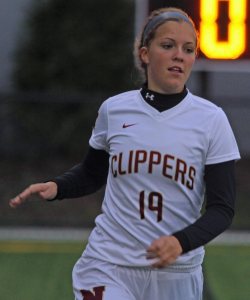 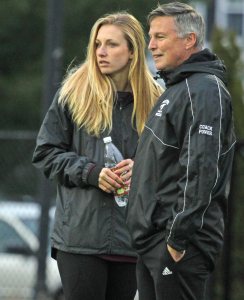 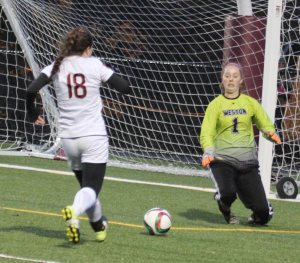 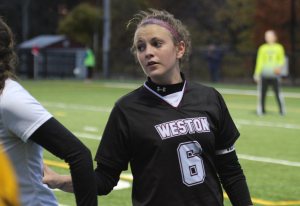