Newburyport used its speed to get layups

(Newburyport MA) What a second quarter!

The Newburyport Clippers took the visiting Manchester-Essex Hornets apart in that second frame and took the suspense over the outcome along with it.

The final was 62-47 for this Tuesday night game but if you were on hand one minute into the second quarter you saw the Hornets with a 16-12 lead.

How did they do it?  After a period of allowing the Hornets, especially Melanie Carter, to get to the basket the Clippers protected the paint better.  They also rebounded better.  Good defense transferred into up-tempo offense and layups down the other end.  Even in their half-court offense Newburyport found ways to get to the basket for points or foul shots.

Anna Hickman (20 points) was a standout on both ends of the court.  Her tight D on ME point-guard Kaitlyn O’Connell impacted the Hornets ability to run their offense.  The sophomore forced turnovers and was part of numerous NHS fast-breaks.  Anna drained two 3’s, made four other baskets, and took ten free throws.  Quite a performance against a team that came in undefeated after six games. 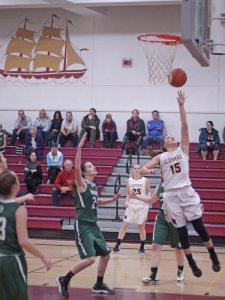 Krysta Padellaro (17 points) in for two

Krysta Padellaro (17 points) had a big hand in the win as well,  She put up eleven points in the breakaway second quarter.  The ME deficit was only four (22-18) five minutes into the second quarter before the NHS junior dribbled the length of the court for one layup, drained a triple, and drove in for another layup.  Those seven unanswered, extended the NHS margin to eleven (29-18).

Two free throws by Sarah Robinson (17 points) stopped the bleeding temporarily but the Clippers came back with eight points in a row (Olivia Olson layup & 2 free throws, Krysta jump shot, Anna layup) and the lead was seventeen (37-20) one minute into the second half.

The teams played even the rest of the way.

Manchester-Essex used a zone defense.  Their trouble was getting back fast enough to get into it.  The Clippers were eager to run after every defensive rebound and collected layups at the other end by doing it.

The Hornets (6-1) were coming off an impressive win at home (39-37) against Pentucket on Friday night. 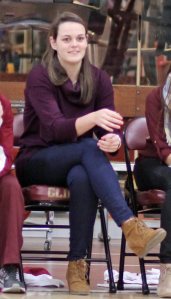 Beth Castantini was on the Newburyport bench.  She was a 1000-point scorer for the Clippers back in the day. 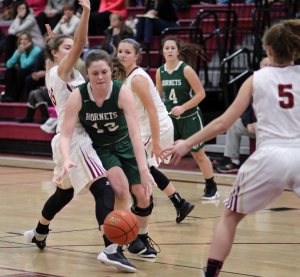 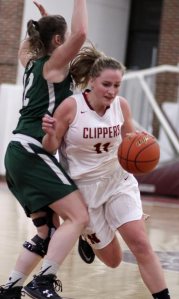 Katie Hadden to the basket