The Clippers had few openings inside against Masco 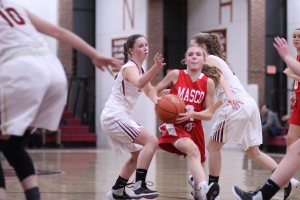 (Newburyport MA) No second-half comeback needed in this one.

Masco dominated from the get-go and routed Newburyport, 59-31, on Friday night in Cape Ann League action.

The Chieftains (12-4) had needed to rally after halftime in three of their previous four games to get a W.

Newburyport (8-8) has reached the seriously struggling stage having dropped six of their last seven.  Getting the ten wins needed to get to the tournament is going to require a major turnaround in quality of play. 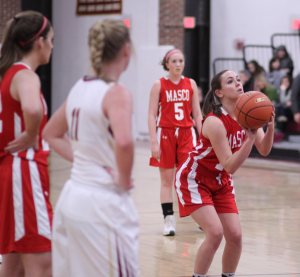 The best the Clippers did all night was put five points in a row at the start of the second half. Unfortunately, by then they were already behind, 39-14.

In the first 3 ½ minutes of the game the visitors pulled away 9-2 on two rebound baskets (Marissa DeLucia, Grace Fahey), plus two free throws and a triple by Mak Graves.

How did Masco win?  They dominated the boards and were very accurate at the line and beyond the arc.

The Clippers were outrebounded by twenty (49-29).  The killer stat here was sixteen offensive rebounds for the team from Boxford.  Paige Amyouny was the board master with fifteen.

I have seen Newburyport twice now.  Free throws were a glaring problem in both games.  A one-point loss to Amesbury included missing the front end of two one-and-one’s in the last minute.  In tonight’s game, NHS connected just four times in fourteen tries.  Masco, on the other hand, was twelve-for-sixteen taking freebies.

Long range things followed the same pattern.  Masco clicked seven times from beyond the arc while Newburyport just once. 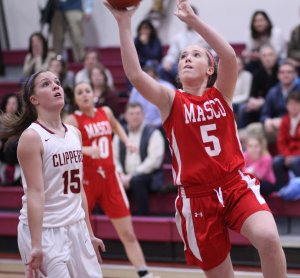 Paige Amyouny in for two

Mak Graves (twice), Grace Fahey, Paige Amyouny, and Andrea Faia were successful from long distance in the first half.

The Clippers trailed 18-10 late in the first quarter but the next seven points belonged to Masco.  That fifteen points lead was still in place (29-14) 2 ½ minutes into the second quarter.

The last four minutes of the second quarter were all Masco.  They tallied ten straight points, including the last five by Andrea Faia, and had permanent separation, 39-14, at the half.

First look for me at Masco.  Impressed with the defense and the rebounding.

The Clippers were keen to get the ball inside to Katie Hadden and were able to.  However, once Katie had the ball an extra defender showed up and left the sophomore with little room to maneuver. 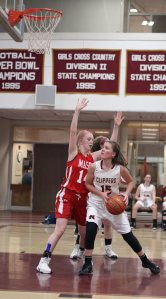 Turnovers were not a factor in this game.  Each team had seven, according to my stat collection.  There was full-court pressure by both teams but few miscues resulted.

Freshman Mak Graves (15 points) led all scorers.  Nice article today about her in the Salem News.  I was not sure which one she was during warmups tonight and was surprised to find out which one she was.  Mak was easily the shortest girl on the floor but convinced me that she belonged out there with the “big” girls.  Mak dribbled and passed well and even took in six rebounds.

Mak leads Masco with twenty-five three’s for the season.  She had three against NHS.

Mak was a Cape Ann League All-Star in field hockey.

Missing from the Newburyport team is sophomore Anna Hickman with a torn ACL suffered against North Reading.  The Clippers desperately missed her point-scoring ability and tight defense in tonight’s setback.

Thanks to Andy Tappin for two stat sheets.  No better place to get information on what is going on with Masco girls’ basketball. 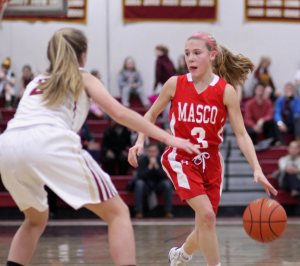 Masco box from the game

Newburyport box from the game 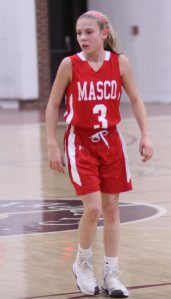 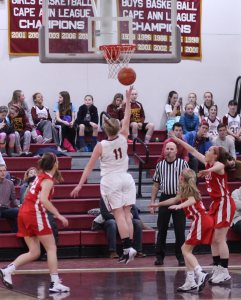 Katie Hadden floats in the lane 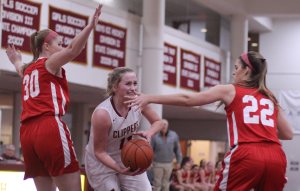 Katie Hadden tries to get between Lily Polakiewicz and Grace Fahey 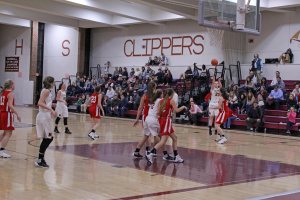 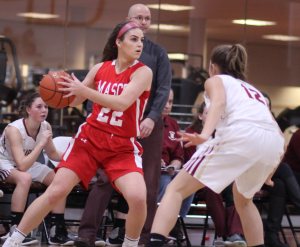 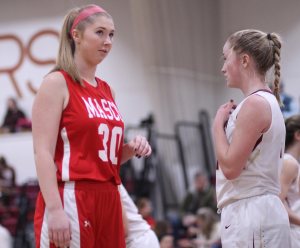 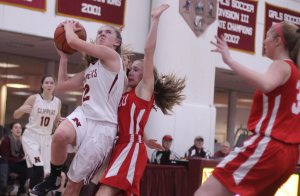 Sam Cavanaugh gets to the hoop 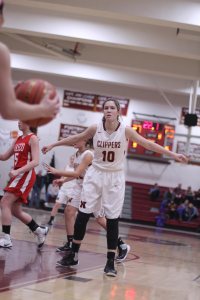 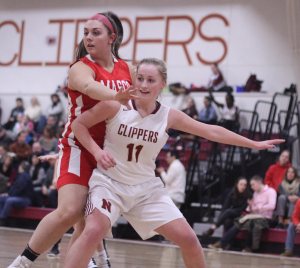 Katie Hadden looks for a pass with Stephanie Mini defending 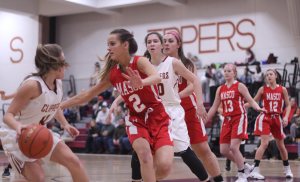 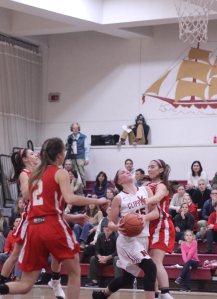 Krysta Padellaro (11 points) in the lane