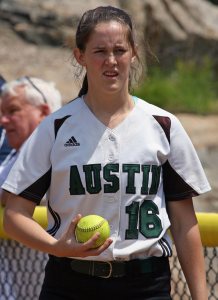 (Beverly MA) It was a long afternoon for the #1 seed Latin Academy Dragons.

Not only did they have to deal with the pitching of junior Logan MacDonald (eleven K’s) but they also had a tough afternoon of defense.

Those two aligned themselves under a sunny sky at Endicott College on Saturday afternoon and the result was an easy 8-0 win for the #2 seed Austin Prep Cougars.

The Dragons (23-3) had won ten straight games in a season in which pitcher Olivia McGrath (six K’s vs Austin Prep) had been dominant especially in the Boston City League.

Olivia’s pitching had carried the young (they started two eighth graders) Dragons but on this afternoon the AP hitters began making serious contact against Olivia early.  Both Lauren Sablone and Frank Frelick struck home-run distance foul balls to left in the first inning.

In the second, Lauren (freshman) straightened one out and over the left-centerfield fence it went for a two-run homer. 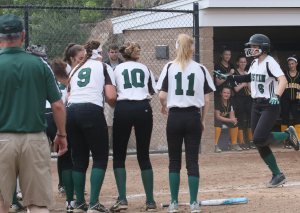 Austin Prep led 4-0 after two and held that lead after four innings.  Meanwhile, during those four innings, pitcher Logan MacDonald had notched eight strikeouts and held LA to one hit (Mackenzie Theriault).

The team from Reading sealed this one in the top of the 5th inning.  The Cougars got two hits (Kendra Currier, Frank Frelick) but it was the miscues in the field that killed Latin Academy.  A mishandled bunt (catcher Shantary Pimentel) and two passed balls led to four unearned runs.

In that breakaway fifth, even a bad AP play, turned into a run.  Caroline Sablone did not tag up from 3B on a fly to left but went back and tagged up belatedly and then tried to score.  A certain out turned into a run for Austin Prep as the throw home was high.

Austin Prep had two errors of their own (Cristina Tighe, Kendra Currier) but Logan MacDonald followed with strikeouts to avoid damage.

Best play of the game?  Kendra Currier in the 5th inning.  The Dragons had runners on first and second with two out and trailed by eight.  Could they break through against the Cougars?  Kendra made sure it didn’t happen. Michaela Russell hit a hard grounder to Kendra’s left.  Looked like a run-scoring base hit but Kendra dove to make the stop and then flipped to 2B Ella Saracco to end the inning.

The Cougars finished with eight hits including three by Kendra Currier, and two each by Lauren Sablone and Frank Frelick.  Logan MacDonald had the other hit.

AP tallied a run in the first.  Lauren Sablone singled, stole second, and was sacrificed (Alex Santostefano) to 3B.  Frank Frelick’s grounder to deep shot brought the run home.

Shaky defense caused LA trouble in the three-run Austin Prep second.  3B Jessica Rynne deflected Ella Saracco’s infield grounder to start the inning.  Logan MacDonald sacrificed Ella to 2B.  A passed ball got Ella to 3B and then CF Mackenzie Theriault dropped a fly ball allowing Ella to score.  Later in the extended inning Lauren Sablone had the 2-run homer.

Michaela Russell and Shannon Bedard converge on a popup

Those gift runs were just too much to get back against a pitcher of Logan MacDonald’s ability on this afternoon.

Neither pitcher walked anyone.

Austin Prep only losses this season have been to Catholic Central League rival St. Mary’s.  AP did avenge those losses with a win over the Spartans in the D3 North semis.

Very nice softball facility at Endicott.  Beyond centerfield is a huge rock.  There was a plan to have a water fountain located there that would be similar to the one in Kansas City.

Olivia McGrath throws to 1B 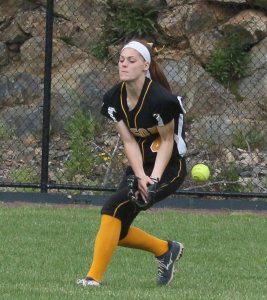 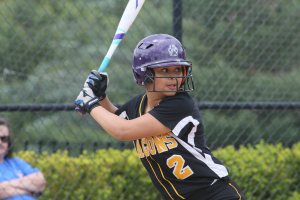 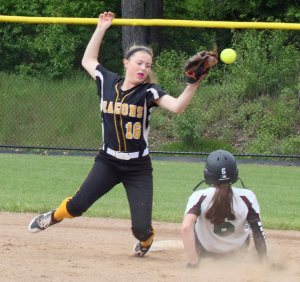 Latin Academy before the game 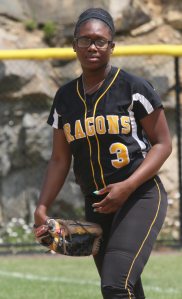 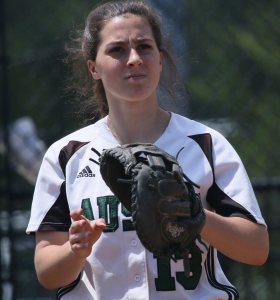 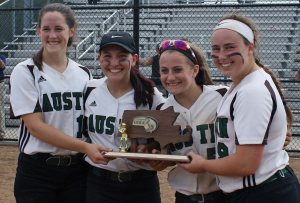 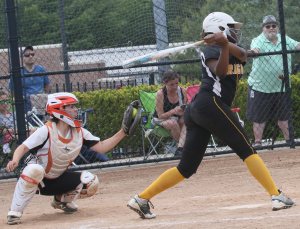 Shamyia Banks out swinging to end the game 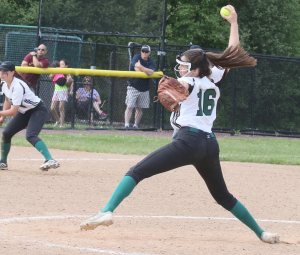 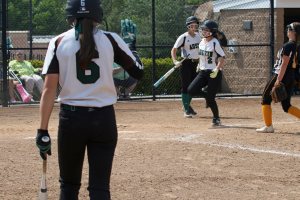 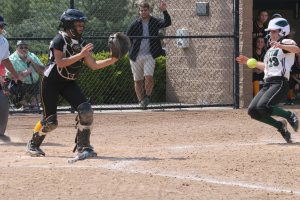 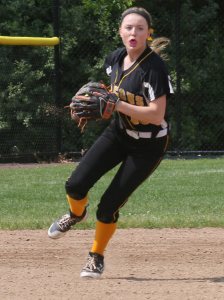 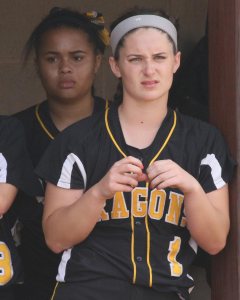