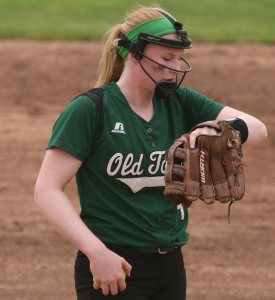 Mckenna checks on the pitch called.

Where do you begin in describing her part in Old Town’s 2-0 victory over Fryeburg Academy in such an important game?

The obvious would be her NINETEEN strikeouts.  In a seven-inning softball game there are only twenty-one outs!  One of the other two outs was a popup caught by Mckenna.

The other out?  Great catch by Coyotes left fielder Jannessa Brown in the Raiders’ 3rd inning.  A shot by Fryeburg’s Mackenzie Buzzell looked headed for the base of the LF fence but Jannessa sprinted straight back and was tall enough to make the grab.  With a runner (Grace Condon) on first there might have been a FA run without Jannessa’s catch.

The Raiders (16-4) could have used that run because they had just fallen behind by two runs in the top of OT’s tainted third inning.

Old Town’s third-inning runs were both unearned.  After a bloop single to right by Natalie St. Louis, Morgan Love reached on a drop in right by Chloe Coen.  Natalie raced to third on that play with no outs.  Morgan then took second uncontested putting two Coyotes in scoring position with no outs.  Mckenna Smith hit a sacrifice fly to RF scoring Natalie and getting Morgan to 3B.

Key play warning!  Olivia Albert struck out but the ball was dropped by FA catcher Makayla Cooper forcing her to throw to first to get the out.  OT junior Morgan Love alertly broke from third on Makayla’s throw and beat Kaylee Emery’s relay home giving Old Town a huge second run.

Those would be the only runs reigning Class B champion Old Town (18-2) would get but they were enough with Mckenna’s assortment of pitches working.  From where I was watching (press box), it was the rise that did in Fryeburg.  Many of FA’s swings-and-misses were on pitches that ended up shoulder height.

Old Town won the game and all that but it would be a shame to overlook the pitching of the Raiders’ Nicole Bennett.  The FA senior did not give up an earned run and had nine strikeouts.  Nicole surrendered seven hits but stranded eight Coyotes in a strong effort.  Delete the two misplays in the 2-run Old Town third and the late innings would have been a lot more tense.

Though down by two runs, I kept waiting for FA to put a rally together as they had against #1 seed Wells in a 4-run miracle final inning in the South title game.  But junior Mckenna Smith would have none of it.

Certainly a remarkable playoff run for Old Town.  They did not allow a run in any of the four tournament games.

Mackenzie Buzzell, Kaylee Emery, and Chloe Coen had the hits for Fryeburg.

Mckenna had 128 strikeouts in 61 innings during the regular season.

Shortstop Olivia Albert pitched for Old Town in last year’s title game against York and had a home run.

Fryeburg Academy senior Mackenzie Buzzell was injured sliding into second base in the first inning. 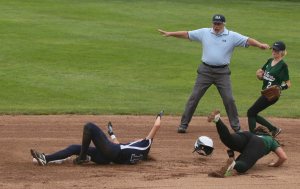 Lauren Gasaway and Olivia Albert each had two hits for the Coyotes.  Mckenna Smith had the first of OT’s seven hits. 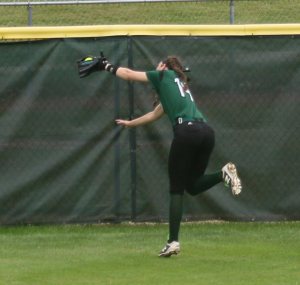 Last time I saw Fryeburg softball was in 2012 when they defeated Greely 8-1 to take the Class B South championship.

Good crowd from Old Town on hand.  Why?  The OT baseball team was scheduled to also play at St. Joseph’s later in the afternoon.

Mckenna was given signals from the dugout by assistant coach Adam Boucher.  She would check her wristband after each signal and several infielders did too.  When I saw Mckenna looking at her wrist I couldn’t help but think of Celtic Isaiah Thomas and his routine of looking at his imaginary watch during “Isaiah” time.  No question it was “Mckenna time” on this afternoon!

Old Town celebrating begins after the final out 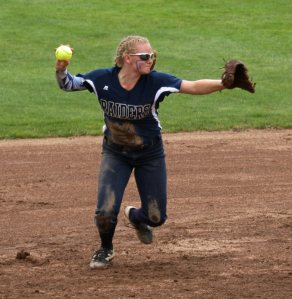 Shortstop Tina LeBlanc sets to throw to first base 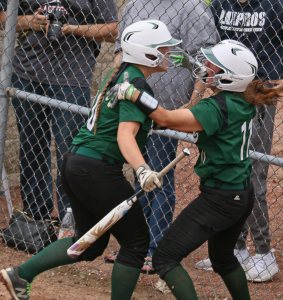 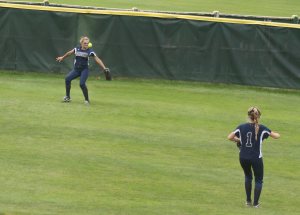 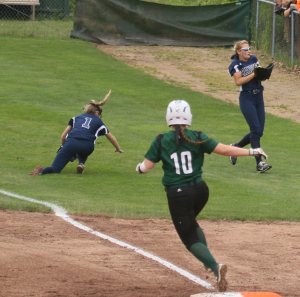