Amesbury advances to D4 semis with 2-0 win against St. Mary’s 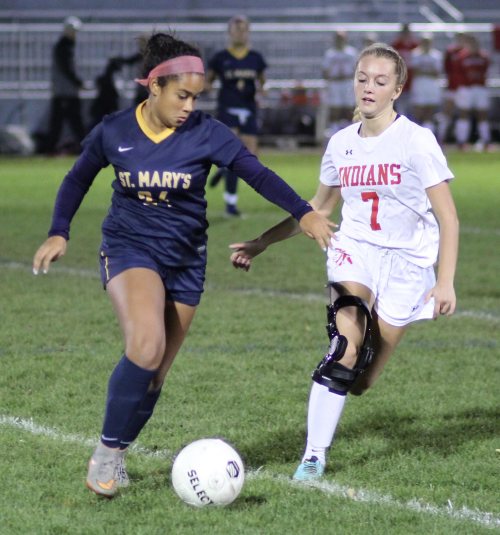 Michaela Halloran’s tap heads for the goal line as a lunging Morgan Mackie tries to stop it.

(Amesbury MA) The scoreboard at Landry Stadium wasn’t up to speed but the Amesbury girls’ soccer team sure was as they defeated St. Mary’s, 2-0, in the Division 4 North quarterfinals.

The Sunday evening matchup featured a heavy dose of pressure by the Indians on the Spartans.  There were plenty of passes away from the middle that gave Amesbury’s speedsters opportunities to create scoring chances.

The Indians (14-5-1) scored both of their goals (Hannaih Burdick, Michaela Halloran) in the first half.  Instead of playing conservatively in the second half, Amesbury just kept attacking.

And there was only one reason why this didn’t end up being a seven or eight goal game: Alex Iacoviello.  The St. Mary’s goalie faced shots from just about everywhere in the second half and dazzled everyone with the saves she came up with.

“She (Alex) kept us in the game,” said Spartans coach Jim Foley.  “Several of her saves were unbelievable.” 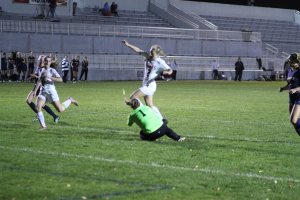 By keeping the heat on the St. Mary’s defense, Amesbury was able to limit the chances the Spartans had.  But the team from Lynn did have several anyhow.

St. Mary’s top scorer (Kayla Demers) had a good look in the second half.

There was also a situation where Amesbury GK Alli Napoli had the ball get away from her after attempting a save.  The ball was loose close to the corner and a St. Mary’s player was about to take a shot at an unguarded net but three Amesbury players slid in to block any straight shot at the goal.

That’s what makes Amesbury so tough: Not only are they fast into the attacking zone but they are also fast to get back to help on defense.

“Amesbury is probably the best team in the D4 North,” explained Coach Foley.  “We ended up meeting them a little earlier than I had hoped.”

The #6 Indians will meet #2 Essex Tech in the semifinals on Wednesday night at Manning Field in Lynn.

Hannaih Burdick’s goal was set up by Emma DiPietro seventeen minutes into the first half.  A throw-in from the left side reached Emma.  Instead of trying to go toward the goal, Emma passed further right to an uncovered Hannaih.

The shot was a long one but Hannaih had experience taking it from that far out.  The shot was a high one and sailed into the top of the net on the left side.

“I thought that the shot had gone over the net,” recalled Hannaih afterwards. 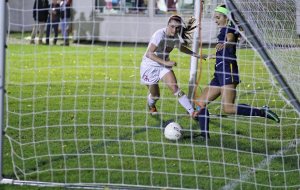 The battle AFTER Michaela’s shot had crossed the line

The second Amesbury goal was set up by Chelsea Lynch.  Down the middle she came with defenders on either side.  Alex Iacoviello came out to challenge and Chelsea’s shot bounced off her and over her.  The ball headed ever so slowly toward the net.  Michaela Halloran saw it and tapped it just enough to get it across the goal line.  Michaela and Morgan Mackie battled for possession inside the net, but the goal had already been scored.

In the second half, St Mary’s (9-8-3) couldn’t get the goal that would have made things more interesting down the stretch.  “We’ve had trouble scoring all season,” added Coach Foley.

The speed of Amesbury has been noted.  Also important is to have players in the midfield who have the dribbling skills to make players miss.  Most opponents attack someone with the ball at full speed.  The talented players often make those attackers miss by pulling the ball back.  Those of us who enjoy watching Charlie Brown attempt to kick a football with Lucy holding the ball know what I mean!  Midfielders Ashley Pettet and Emma DiPietro make players miss on a regular basis. 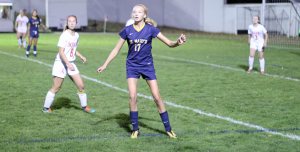 Morgan Mackie was a standout on defense for St. Mary’s.

Part of the scoreboard was not working.

The lighting in Landry will test the quality of the best of cameras.

Pleasant night in the 50’s. 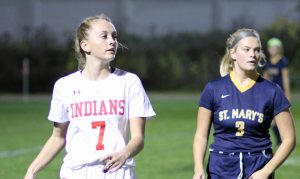 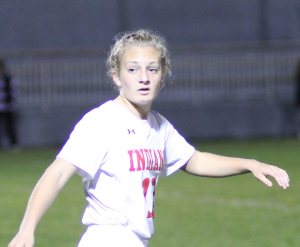 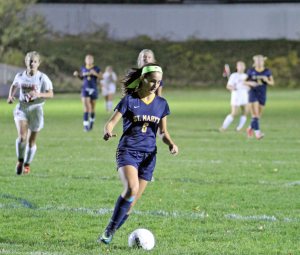 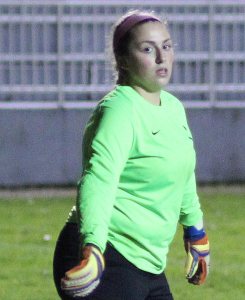 Maddy Creps in for a testing shot that went just wide. 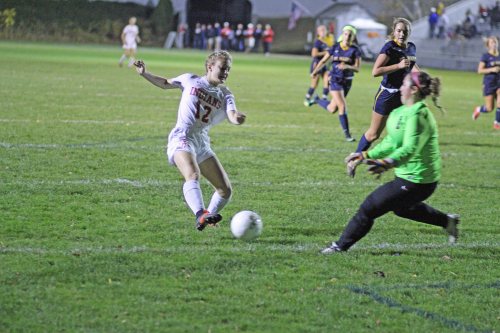 Chelsea Lynch in on goal 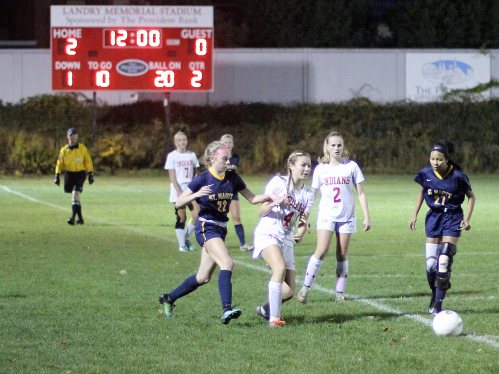