Yale alone atop Ivy League with 24-3 win over Harvard

(New Haven CT) Special game for Yale as they ended a 9-1 season with a 24-3 win over Harvard on Saturday afternoon.

The victory gains the Eli undisputed possession of first place in the Ivy League.  That hasn’t happened for them since 1980.

Harvard led early, but I kept waiting for the Yale offense to kick in.  It happened in the second quarter as the home team collected seventeen points to gain permanent separation from the Crimson.

Harvard (5-5) botched two quarterback options in that second quarter and both led to Yale scores in less than a minute.

The touchdown that I had the best look at was Malcolm Dixon’s.  The six-foot sophomore beat teammate Michah

Awodiran and fumbler Aaron Shampklin for a loose ball and jetted nineteen yards into the end zone.  This all happened right directly in front of me.

Plenty of smiles after Zane Dudek gave the Eli a three-touchdown lead in the 4th quarter.

Yale (9-1) sealed the deal in the last quarter.  Freshman Melvin Rouse rushed the ball close to the goal line and fellow freshman Zane Dudek covered the final two yards over right guard.  It was Zane 15th rushing touchdown of the season.

The rest of the game was scoreless played in darkening conditions (no lights at the Yale Bowl) with an occasional drizzle.

It was my first experience on the sidelines for such a big Division 1 game.  Touted by some as The Game. It drew 51,426 spectators.

Yale was the better team, in my opinion, on both sides of the ball.  Harvard passers (Jake Smith,Joe Viviano) were heavily pressured while Yale QB Kurt Rawlings had time.  Kurt was also able to scramble for yards.

Kurt’s pass to JP Shohfi in the second quarter was lofted perfectly over defender Isaiah Wingfield.  It was Kurt’s 19th TD pass of the season.

The significance of the victory was understood by the active Yale student section.  They flooded the field after the game ended to celebrate with the team.  I wished that I had had my wide-angle lens with me for that scene.

Plenty of tailgating going on pre-game.  I don’t drink and I don’t eat meat but I can tell you that there was plenty of both being consumed outside the Yale Bowl.

During the game only one person was taken away in a stretcher and she was a spectator.  It was a wakeup call to me because if one of those players runs out-of-bounds and into me I will almost certainly be hospitalized.  Must stay full-time alert!

Outstanding bands from both schools.

Some Yale pranksters placed a huge misspelled Harvard (Havrard) sign on the back wall behind the Harvard student section.

I suppose I shouldn’t have been surprised that somewhere in the second half large numbers of male/females in the Yale student section removed more clothing than they should have.

I traveled with an umbrella that I can attach to my mopod.  Came in handy during the second half.

I am very thankful to Steve Conn for arranging my visit to the Yale Bowl.

Malcolm Dixon (1) on his way to the end zone. 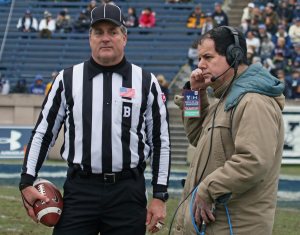 Kurt Rawlings (6) with time in the pocket 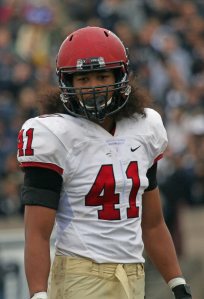 Harvard turnover in the second quarter 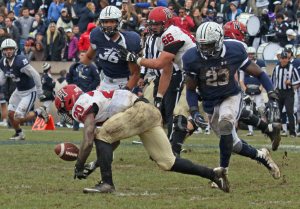 Ball about to go on the ground 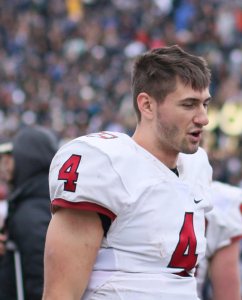