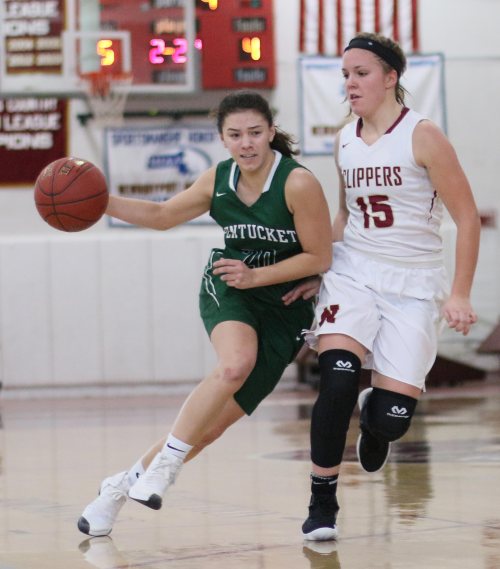 Sophomore Angelina Yacubacci had sixteen points to lead the Sachems

It’s why I cover games!  Scores alone can be very misleading.

This wasn’t a “twelve-point” game. This was a close game with FOURTEEN lead changes through three quarters.

And that they were……….for three quarters.

The 4th quarter?  The Clippers defense was still good, but the offense disappeared.

“We needed to take better shots,” conceded Newburyport coach Gregg Dollas. “We needed to move the ball.  We really struggled with shot choices in the last quarter.”

Today’s last quarter probably brought back bad memories from the last time Pentucket and Newburyport faced each other.  It was March 1st in the first round of the D2 North tournament.  In that one the Clippers were down 12-1 after a quarter and ended up losing badly, 46-19. 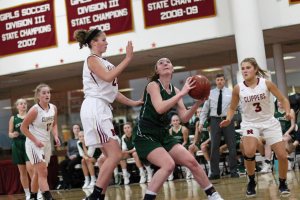 Abi Gillingham and Liv Cross near the basket

Today it was the last quarter that sunk the Clippers. They were outscored 9-1 in that quarter and squandered a game in which they were impressive otherwise.

The Sachems (8-1) are a team that will press and use defense to create offense.

The Clippers (7-2) play a tight man-to-man defense and will run with turnovers and rebounds.

The most impressive thing about Newburyport (IMO) in this game was that they had fewer turnovers (12) than Pentucket did (19).  The Clippers took good care of the ball.

The most impressive thing about Pentucket?  Their game-long organized offense. They certainly looked to get the ball inside to junior Liv Cross (“She’s a stud! – Coach Dollas) but they were patient about it.

That patience on offense was most noticeable in the final quarter when Newburyport raised the pressure.

Sophomore Angelina Yacubacci topped all scorers with sixteen points.  Angelina drained a three in the third quarter and made four straight free throws in the final two minutes to make NHS pay for fouling.

Krysta lost some time because of fouls.  “We can’t have her sitting on the bench with foul trouble,” said Coach Dollas.

Coach McNamara also had a key player on the bench with fouls. Inside threat Liv Cross sat out in the first half with two quick fouls. “We missed having her out there,” said Coach McNamara.

Newburyport broke away from a 9-9 tie 1 ½ minutes into the second half.  A rebound basket by Abi Gillingham, a steal and layin by Anna Hickman, and a Maggie Pons jump shot from the right had the Clippers in front by six (15-9).

Back came the visitors with nine straight points.  Two inside scores by Angelina Yacubacci and a layup by Emily Riley was followed by a 3-point shot (off the backboard) from straightaway by sophomore Angelica Hurley.

Against some teams a Pentucket run like that one is the beginning of an avalanche of points.  Not this time.  The Clippers had answers and took the lead three more times.  An inbounds play by NHS (to Abi Gillingham) tied the score at 31 with thirty-five seconds left in the 3rd period.

Thereafter, Newburyport’s inability to make shots or even draw fouls did them in.  Meanwhile, the Sachems scored the next seven points, including another three by Angelica Hurley (from Casey Hunt) that put Pentucket up, 38-31.

The Clippers finally got a point (free throw Meghan Winn) with two minutes left but the last six points scored in this game were by Pentucket’s Angelina Yacubacci.

Player to watch?  Newburyport’s Abi Gillingham. The 6-1 freshman is a presence at both ends of the court.  She discouraged several Sachems shooters from even attempting a shot in close to the basket.  “She has potential,” added Coach Dollas.

Now in his 12th year, John McNamara has a remarkable 240-42 record.  Many of those losses are against non-CAL teams.

The Clippers did put a 33-29 win together against Pentucket last season on February 14th at Newburyport.

The two Division 2 opponents will meet again on February 9th at Pentucket. 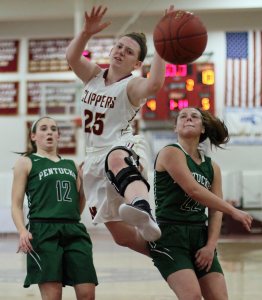 Anna Hickman chases a ball going out of bounds 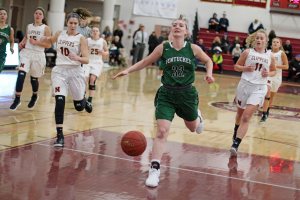