Late run gets Pentucket past Newburyport 63-57

There were six lead changes and seven ties.

Anyone’s game, for sure, before Pentucket took it over with eight straight points and defeated Newburyport, 63-57, on Senior Night on Friday.

In the crucial eight-point streak in the final three minutes of the game it was four drives to the rim that turned this game to Pentucket.

According to Pentucket coach Ed Hickey, containing the McLarens (Parker and Casey) was crucial.  “They were terrific tonight.  We made adjustments at halftime to help us to cover them better.  Casey (18.6 points per game) is always capable of scoring a lot of points.”

The Sachems played a high 3-2 zone that limited the outside looks of NHS.  It did open things up for Parker McLaren (19 points) in the lane area.

Let’s review the game-changing segment in the final three minutes.  After a three by Casey McLaren (15 points), the home team trailed by only a point (53-52).  Nate McGrail (19 points) then scored a layup and was fouled but missed the freebie.  Next possession by Newburyport ended with a technical foul.  Gus Flaherty tallied both technical free throws boosting the Sachems lead to 57-52 with 2:45 to go.

After a turnover, Pentucket had two profitable possessions in a row.  Both were assisted layups.  First by Sam Stys from Alex Willis and then Gus Flaherty from Spencer Pacy.  Those two plays extended the Pentucket advantage to nine (61-52) with a minute left.  Game. Set. Match.

“We made extra passes and it opened things up,” said Coach Hickey.

The visitors from West Newbury had another run of eight unanswered points in the final three minutes of the first half changing a 31-23 score into a halftime tie.

The Clippers will close out the regular season with four straight away games.

The Sachems have a 7-5 edge versus NHS over the past five seasons.

Gus Flaherty had twenty-three points in the first meeting (68-54 Pentucket win) including five 3’s.  The Clippers took the long shot away (Gus had only one 3 in tonight’s game) but gave up too many inside scores.

The Clippers five seniors, and their families, were honored before the game and started the game even though none of them were normally starters.

Newburyport (11-6) and Pentucket (12-5) are both in the post-season tournament and both are in Division 3.  And both of them are in the north.  Point?  They could meet again this season.

(For the second game in a row I am disagreeing with the official scorer. Maybe I should stop believing my lying eyes?) 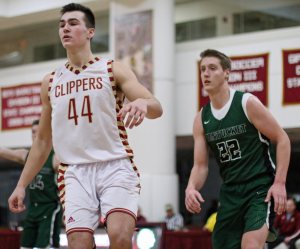 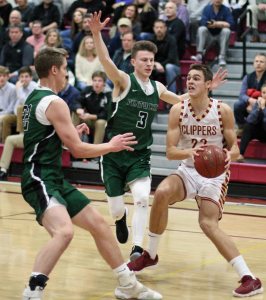 Senior Jeevan Kowalski looks for someone to pass to