(Danvers MA) Pentucket dominated the beginning and the end defeating Melrose, 59-45, in the Division 2 North semi-finals on Thursday night at St. John’s Prep.

The Sachems (22-2) take on Wakefield on Saturday (2PM) in the D2 North finals at the Tsongas Arena in Lowell.  Melrose and Wakefield split in their two Middlesex League games this season.

Pentucket ran and pressed Melrose into mistakes from the outset and had a 10-0 lead after 4 ½ minutes.

“We never got into any kind of rhythm,” said Melrose coach Bill Hirchfield afterwards. “They were right on us from the get-go.”

Peri MacDonald (11) looks for a pass

What looked like a bad matchup early was anything but that as the game progressed.

During the run of good Melrose offense, Sam Smith’s big three ended the first half. Lily Cunningham (13 points) continued the Melrose scoring with a full-court layup and free throw.  Freshman Sam Dewey (17 points) finished the drive to the lead with a put-back.

“We scouted her (Sam Dewey) and knew she was good,” explained Pentucket coach John McNamara.  “She is very hard to handle down low.”

Liv Cross (10 points,10 rebounds) reignited the Pentucket offense with a rebound basket to tie things at 24-24.

Angleina Yacubacci (10 points) followed with two free throws that gave the Sachems the lead for good with four minutes to go in the 3rd quarter.

This game, however, was anything but settled.

The Lady Raiders stayed within one or two possessions until the Sachems gained serious separation with a run of seven points early in the final quarter to pull up by ten, 46-36.

That ten-point separation was just about as safe as that 10-0 lead at the start!

As I said at the start, Pentucket finished strong.  In the final stretch they controlled the ball without any turnovers and forced Melrose to foul by constantly going to the basket.

The Sachems late-game foul shooting was a very good eleven-for-fourteen.  There was also a Jess Galvin (11 points) layup set up by Casey Hunt (14 points).

“Everything we do is based off of our defense,” said Coach McNamara.  “When we play good defense, our offense opens up.”

That Sachems’ defense created a whopping thirty-two turnovers including six during the fast start and four during the strong finish.

The Lady Raiders were at their best when they turned Pentucket misses into fast breaks.  Lily Cunningham went the distance several times for Melrose.

“They were a good team,” said junior Liv Cross afterwards.

Liv gave credit to Coach McNamara: “He knows exactly what will work against teams.  He puts a lot of time and effort into scouting other teams.  We are always well prepared.”

Coach McNamara cited the play of junior Maddie Doyle: “She did a spectacular job on #32 (Alexis Doherty).  She is their high scorer and Maddie was very disciplined to keep focus on her.  Those little things are what gets a team to the divisional finals.” 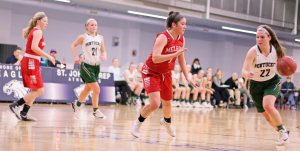 The Sachems drove frequently to the basket. “We knew that they weren’t too deep, so we wanted to attack them and get them into foul trouble,” said Caoch McNamara. “We want to wear the other team down.”

I arrived early and wondered where everyone was.  Of course, I was at the old gym.  I told Coach McNamara about my mistake before the game and he said that he liked that old gym because Pentucket had never lost there.

The new gym is very nice.  The old one had one scoreboard.  This one has several.  I am not a fan of seats in the end zones but overall, I liked it.

Melrose’s last win over Wakefield gave them the Middlesex League Freedom Division title for the first time in ten years. 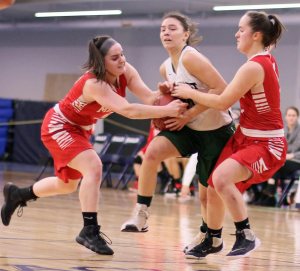 Casey Hunt tied up by Lily and Abby Cunningham

Casey Hunt (20) takes off after another steal

Freshman MacKenzie Currie at the line