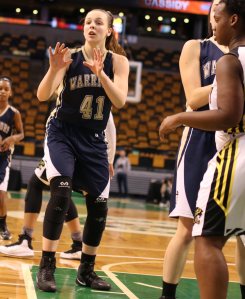 (Boston MA) The storm arrived a day early for Coach John Rice and his Fenway Panthers.

That “storm” was the Coyle & Cassidy Warriors.

The Warriors (22-3) never trailed as they won the Division 4 state semi-final game, 55-47, on Monday afternoon at the TD Garden.

“We just played the best team we’ve played all year,” said Coach Rice afterwards.  “They did everything well.”

This was the first time Fenway (21-3) has lost at the Garden in the five times Coach Rice has brought his teams there.

The Warriors started fast (9-0) forcing the Panthers to burn two timeouts in the first four minutes.  Senior Me’ara Carter (10 points) finally got Fenway on the board with a nice spin down the lane.

The team from Taunton built their advantage to as many as seventeen points (40-23) in the third quarter and still were up by fourteen (44-30) two minutes into the final quarter. 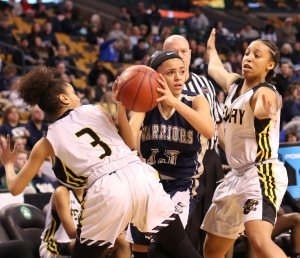 But a good team like Fenway was not going to go away.

“I told the team at halftime that Fenway would make a run,” recalled Coach O’Brien, “and that was what happened.”

The Panthers put a run of eight straight together and suddenly with 3:20 left in the game the deficit was just six (44-38). Dasiah Thornton had a three during the rally.

Plenty of time for Fenway but on this afternoon C&C refused to let it happen.

A key play for the Warriors was a Kassidy Fields block that led to a breakaway layup.  “Kassidy blocked it and it came to me,” said Sam Hourihan afterwards.  “I outleted the ball and we ended up with a layup.”

The play Sam described was part of the ten points the Warriors put together after Fenway was within six.

Kaylee had two layups and a free throw while Rachel assisted on the first two baskets in the two minutes of offensive excellence.

The Panthers would add nine points in the last minute, but time was on C&C’s side and they won, 55-47.

“We cut the lead to six but then left one of their players alone and they went down and got an and-one,” said Coach Rice.  “That turned the momentum their way.”

“We perservered,” said Coach O’Brien.  “We made some big shots down the stretch.”

Coyle & Cassidy will play for the state title on Saturday at Springfield against Monson.  It will be the Warriors first time in the state finals since 1987.

Plenty of good guard play by the Warriors.  The Panthers some serious pressure on those guards in the second half. The result was four C&C turnovers as the team from Roxbury cut the lead to six.

“We were too close to the sidelines,” said guard Kaylee Haynes after the game. “That is why they were able to trap us. When we got the ball into the middle we were able to spread them out and get layups.” 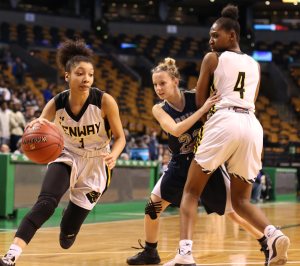 The Warriors ran early in the game with missed Fenway attempts to get that nine-zip lead.  Rachel Johnson, Sam Hourihan, Kaylee Haynes, and Kassidy Fields supplied the points.

Fenway had size (Me’ara Carter is 6-3) and drivers.  The Warriors handled those things with help defense. They also committed plenty of fouls but benefitted from an off afternoon at the line by the Panthers.

Fenway’s poor foul shooting (19-for-35) had a direct connection to the final outcome.  When the Panthers were within six, in the last quarter, they had already missed thirteen freebies.

C&C had success during the game breaking out with Fenway misses and getting layups before the Panthers shot blockers could get back on defense to be a factor.

Juniors Rachel Johnson and Kaylee Haynes led the Warriors with twelve points each.  Rachel had nine in the first half.

Jenna Piatelli at the line

“My father coached thirty years and never got a sniff at a state championship,” said Coach O’Brien.  “I’m happy to be in this situation.”

The Warriors were able to contain sophomore Janyah Gulley.  In the tournament, Janyah had twelve rebounds against Lowell Catholic and nineteen points versus Mystic Valley.

It is always exciting for the players to play a big game at the Garden.  So much history.  Pretty exciting for a blogger to cover a game there too. 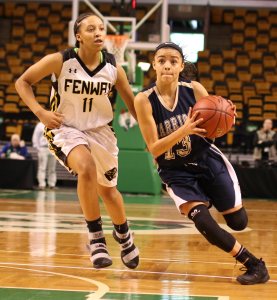 Kassidy Fields (9 points) about to cash a breakaway layup

Dasiah Thornton (3) heads down the lane with Stacie Leonard (23)

Guard Kaylee Haynes (13) looks one way and passes another 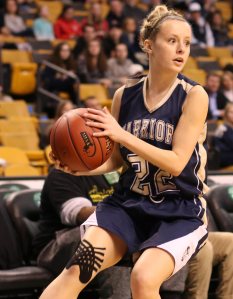 Abbie Kurtzer looks for someone to pass to

Me’ara Carter at the line 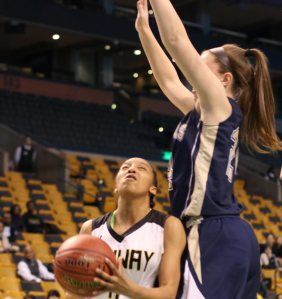 Filed under Coyle and Cassidy, Fenway