Shortstop Bridget Sheehan starred in the field and at the bat

(Byfield MA) It had been a long time.

Seventeen days away from actual-game activity slowed down Triton for a while, but the Vikings rallied to take out Saugus 4-1 in the D2 North First Round.

New territory for Triton.  The Vikings last won a game in the MIAA softball tournament in 2006.

“It was weird not to play for so long,” said senior Zoe Cesati afterwards.  “When we scrimmaged yesterday I almost felt like I had never played softball before.”

The home team erased a 1-0 deficit with two runs after two were out in the third inning, driven in by Zoe Cesati and Bridget Sheehan.

Triton (17-2) would add two more (again with two out) in the fifth inning.  This time Zoe and Bridget scored the runs after a 3-base error by RF Nystasia Rowe.

It was a frustrating loss for the Sachems (11-10).  “The difference today was our inability to get timely hits,” said Coach Steve Almquist.  And who could argue?  Saugus had two runners in scoring position in four different innings (twice with no outs) and scored just one run.

Bridget Sheehan gets an assist from her knees

The defense of Triton shortstop Bridget Sheehan had plenty to do with the multitude of stranded runners.  The Vikings junior had four putouts and four assists.  Two special assists were one from her knees, and another from deep in the hole to her right that required a tough stop and a long/strong throw.

None of the Bridget’s defensive highlights were news to Coach Dupere.  “That’s Bridget all year.  She is in my opinion the best player in the Cape Ann League.  Nothing surprises me with her.”

At the plate, Bridget was 3-for-3 with an RBI and a run scored.

The Sachems (Northeast Conference) scored first.  In the second inning, a single, a walk, and a wild pitch set up two of the visitors in scoring position with no outs.  Sophomore Taylor Bogdanski drove across pinchrunner Cat Schema with a single to center.  Taylor stole second to again put two runners in scoring position, but Triton pitcher Katherine Quigley retired the next three Sachems.

1B Sadie DiCenso made a nice catch for Saugus

“We started off a little shaky,” explained Katherine.  “I needed a couple of innings to settle in.”

The Vikings took the lead in the third inning with two runs, but anyone at the game will tell you that they would have had more but not for a terrific 2-out running catch by CF Emma Howard.

The Sachems had two on (Taylor Bogdanski and Madison Niles) with one out in the 4th but 3B Colleen McCarthy handled two straight chances to end the threat.

The Vikings gained a 3-run advantage in the 5th on the 3-base error in the SHS outfield.  I wanted to credit the batter (Emily Karvielis) with a triple but Coach Almquist said it was an error.  “The sun was tough, but it had been that way the whole game.  She should have adjusted to the sun by the fifth inning.”  Emily’s fly appeared to hit Nystasia glove and then roll away allowing two Triton runs to cross.

The happenings in the Triton 5th impacted what Saugus did in the top of the 6th inning.  After Sadie DiCenso reached on 3B Colleen McCarthy’s throwing error, freshman Kyleigh Dalton was sent in to pinch run.  When Taylor Bogdanski walked, the Sachems had the makings of a productive inning.  Not on this day.  “We would normally have bunted,” said Coach Almquist, “but down three runs we had DJ Munafo hit away.”  DJ hit the ball on the ground toward short and Kyleigh couldn’t get out of the way and was hit by the grounder for the first out.  A fielder’s choice moved both runners up with two outs.  This was where Bridget Sheehan flagged down Ashley Shaw’s grounder and threw an inning-ending strike to first.

Saugus baserunner Kyleigh Dalton (1) ruled out after a grounder hit her.

Triton continues their season on Sunday against Burlington at 1PM at Triton.

Good crowd.  I arrived in the rain but before long we had a “typical” June afternoon.

Coach Dupere: “Saugus was scrappy.  We knew it would be tough.  We had hits when we needed them, and our pitcher did her job.  During out days off, we hit fourteen days but only saw live pitching once.”

Coach Almquist: “Caitlin Wood (6 K’s) pitched every game for us.  We didn’t give her enough run support today.  We lost five 0ne-run games during the season.  This is the third straight year we’ve made the tournament.  We only graduate one player.”

Zoe Cesati gets 2B as Taylor Bogdanski applies a late tag

Triton catcher Liv Doanes: “I was a little worried at first because we weren’t hitting. We usually start hitting once we get through the batting order.  Bridget (Sheehan) has saved us quite a few times.”

Liv told me that she will be attending UMass Boston and hopes to play softball there.

Senior Zoe Cesati had a hit, and RBI, and scored two runs. 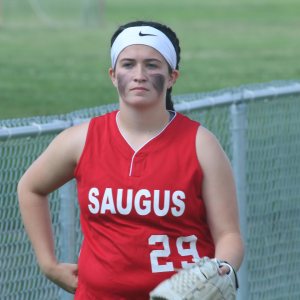 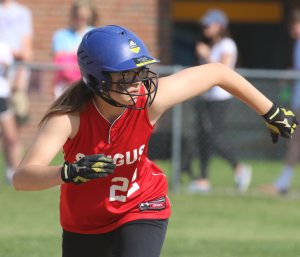 2B Alexa Ferraro dives for a grounder

Carissa Boyle slides under the tag of 3B Brittney Sudanowicz

LF Grace McGonagle takes in the final out 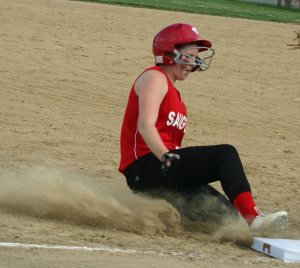 Emma Howard slides into 3B 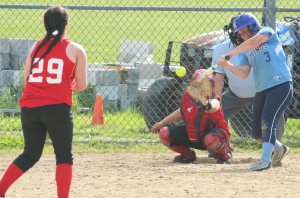 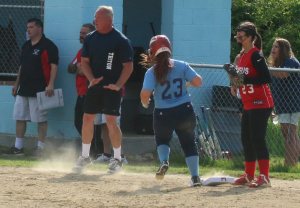 Fly ball gets away from RF Nystasia Rowe

Bridget Sheehan (3) handles a 2-out grounder with two runners in scoring position. 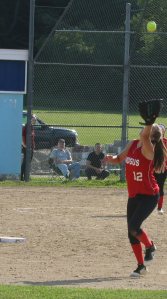