Jason Leonard scores a run for Dedham in the first inning 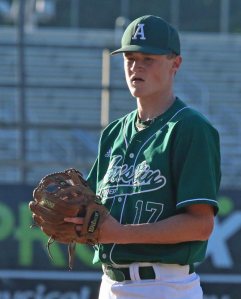 (Lynn MA) Austin Prep held off Dedham, 5-3, to advance to the Division 3 title game on Saturday at Holy Cross.

The Cougars (23-2) trailed 1-0 after a half inning but three batters into their half of the same inning they were up 3-1 partly due to senior Peter Burns’ two-run homer.

“I was looking to see a pitch deep and drive it,” said the BC commit afterwards.  “It was an inside fastball.”

Austin Prep added two more runs in the fourth inning and it was a good thing they did because Dedham got two of their own in the seventh and had the go-ahead run at the plate.

“Nick Cafarelli had a big hit (2-run single in 4th) and we needed those couple of extra runs at the end,” explained AP coach Steve Busby.

Junior Colin Jaena was the complete-game winner for Austin Prep.  His success was all about getting the Marauders to hit the ball on the ground. Dedham had fourteen groundball outs. “My two-seam fastball down in the zone was very effective,” said Colin after the game.  “Coach Merrick did an awesome job of calling the pitches.”

“Colin was hitting his spots,” said catcher Peter Burns.  “We wanted to attack batters early in the count and get up.”

Dedham coach Don Savi was okay with the loss: “I’m pretty sure that we’re the two best teams in Division Three. AP should have been a Super Eight team.”

The Marauders (20-5) got an unearned run in the first inning.  Shortstop Logan Bravo mishandled a two-out grounder and next batter David Logan drove in Jason Leonard with single to right.

Peter Burns (walk) and Logan Bravo (double) reached in the fourth inning ahead of Nick Cafarelli’s single to centerfield.  Both runners scored, and Nick was cut down at second.

Dedham had two on in the fourth, but Colin Jaena worked out of it by getting a fly to center (Peter Coughlin) and a groundout (Billy McCaig).

The Cougars weren’t as fortune with that two-on, two-out thing in the seventh.  In that game-on-the-line spot, both Jason Leonard and Griffin O’Connor singled in runs.  That put the tying runs on base but Colin Jaena was able to get his 14th grounder of the game and teammates SS Logan Bravo and 2B Jon Gilbride combined to get a game-ending force-out at second.

“It was a little scary at the end,” admitted Colin Jaena afterwards.

Austin Prep had to come back earlier in the tournament after getting off to a bad start. “Swampscott scored four runs in the first inning and we came back with five,” said Coach Busby.

Peter Burns continued to impress Dedham coach Don Savi: “We knew that he can hit the ball well.  He hit another one that our centerfielder (Billy McCaig) made a ridiculous catch on.”

Coach Savi was proud of what his seniors contributed to Dedham baseball: “Two years ago we won our conference for the first time in forty years.  Two years later we were battling for the state title.  It’s to their credit.”

Jason Leonard paced the Marauders with two hits.  He also scored a run and drove in a run.

The Cougars move on to face Taconic. “They should do very well,” said Coach Savi. 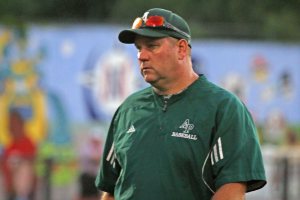 The game started late because the teams were late getting to Lynn.  Coach Savi referenced a three-hour bus ride from Dedham afterwards.

Members of the Austin Prep softball team were at the game in uniform.  Must have come straight from practice.

Impressed with the Dedham support for their team.  After every inning the coaches would talk with the team and the fans cheered them on.

CF Dylan Arnold catches a fly in the 4th inning 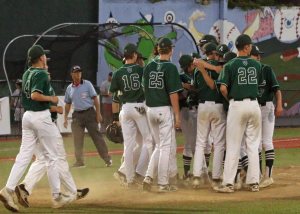 2B David Logan gets a force at second

3B Alex Martinez throws to first 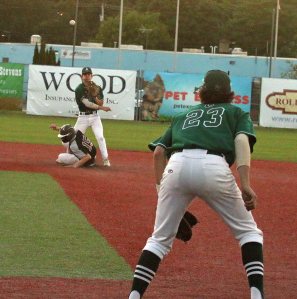